Ernst Büttner was born during the founding period of the German Empire in 1881 in Henriettenstift in Hanover as the son of the theologian Johannes Samuel Büttner , who was active there as pastor and director, and the Adelheid, née Hohorst. In 1887 he attended the preschool, from 1891 to the School of Hanover Lyceum I . From Easter 1898 he attended the Augusta-Viktoria-Gymnasium in Linden , where he passed his Abitur at Easter 1901. He then completed military service as a one-year volunteer in the 2nd Kurhessian Infantry Regiment No. 82 in Göttingen until April 1902 , while at the same time he was enrolled in the philosophy faculty of the University of Göttingen to study history. Until 1908 Büttner also studied geography and religion. In 1908 he was in Göttingen with his dissertation on The War of the Margrave Albrecht Alcibiades in Franconia 1552-1555 doctorate .

After a short legal traineeship in Kassel , Büttner became a teacher at the Hanoverian Bismarck School in 1913 . Apart from an interruption in the First World War , in which he took part in the front line from start to finish, Büttner was a member of the teaching staff at the Bismarck School until his retirement, from 1928 on as senior teacher. 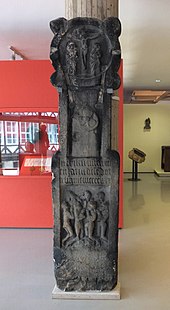 Contrary to his own understanding, Büttner wanted to wrest the Siebenmännerstein with a slogan to persevere as a " war memorial " "to the bitter end"

At the time of National Socialism and in the middle of World War II , Büttner was, alongside journalist Georg Friedrich Konrich and church lawyer Walther Lampe, one of the main actors in the “memorial hour for November 24, 1490” on the occasion of the 450th return of the attack by Duke Heinrich the Elder, which was foiled by Cord Borgentrick Braunschweig and Lüneburg on the city ​​fortifications of Hanover . Büttners gave the apparently unpublished celebratory speech Feud and Freedom - Hanover's Spartans in the context of city, state and imperial history , through which he apparently wanted to establish a connection between the history and the current war present at the time. Contrary to his own understanding, Büttner tried to wrest a “perseverance” slogan from the Siebenmännerstein as a war memorial with the request to “hold out until the bitter end”. However, this propagated attitude of Büttner contributed "to the complete destruction of the old city" during the air raids on Hanover that soon followed . However, the keynote speaker apparently did not want to remember his own contribution for about a decade.

Büttner invested decades of his life in the registration of documents from the history of the city of Hanover and is related to the new inventory of documents in the city ​​archive of Hanover carried out by the archivist and historian Karl Friedrich Leonhardt .

Ernst Büttner died in 1955 at the place of his birth - in Henriettenstift.