Albrecht on a painting by Benjamin Block , 1643. Oil on canvas, Museum "The Hohenzollern in Franconia", Plassenburg ob Kulmbach. 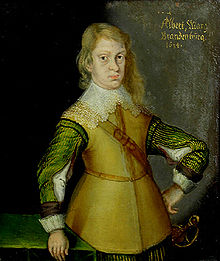 Albrecht on a miniature from 1634

"By God's grace Albrecht, Margrave of Brandenburg, of Magdeburg, in Prussia, Stettin, Pomerania, the Cassuben and Wenden, also in Silesia in Crossen and Jägerndorf Herzog, Burgrave of Nuremberg, Prince of Halberstadt, Minden and Cammin."

After Joachim Ernst's death, his older brother Friedrich von Brandenburg-Ansbach succeeded him in the Principality of Ansbach in 1625, initially under maternal tutelage. However, Friedrich fell in the Thirty Years' War in 1634 . Since he had left no descendants, Albrecht came into his inheritance as the second-born son. As with his brother, however, guardianship and government affairs were led by his mother in the early years. Only after reaching the age of majority did Albrecht take over the government in the Principality of Brandenburg-Ansbach in 1639.

With a great deal of diplomatic skill he navigated his country through the last ten years of the war and promoted the beginning reconstruction through administrative reforms, support for the guilds, cultural life and generous credit policy. He settled Austrian religious refugees and acquired the offices of Treuchtlingen and Berolzheim in 1647 and 1662 respectively . Albrecht's main advisor was his former tutor Johannes Limnäus . Actively involved in imperial politics, he sent troops to the Turkish Wars in 1663/64 .

Albrecht is considered a typical baroque ruler and representative of absolutism . He was buried in the Johanniskirche in Ansbach. 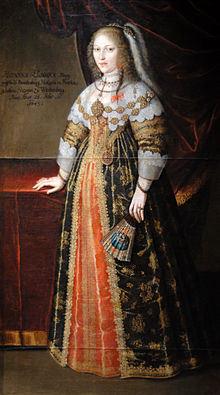 On August 31, 1642, Albrecht married Henriette Luise (1623–1650), daughter of Duke Ludwig Friedrich von Württemberg-Mömpelgard , in Stuttgart , with whom he had the following children:

His second wife was Sophie Margarete (1634–1664) in Oettingen on October 15, 1651 , daughter of Count Joachim Ernst zu Oettingen-Oettingen, with whom he had the following children:

He concluded his third marriage on August 6, 1665 in Durlach with Christine (1645–1705), daughter of Margrave Friedrich VI. from Baden-Durlach . This marriage remained childless.