You have reached the cached page for https://www.britannica.com/biography/Lady-Gaga
Below is a snapshot of the Web page as it appeared on 10/31/2020 (the last time our crawler visited it). This is the version of the page that was used for ranking your search results. The page may have changed since we last cached it. To see what might have changed (without the highlights), go to the current page.
You searched for: +Lady Gaga We have highlighted matching words that appear in the page below.
Bing is not responsible for the content of this page.
Lady Gaga | Biography, Songs, & Facts | Britannica
Lady Gaga
Article Facts & Data Media Additional Info
Article Contents

Britannica Quiz
What’s in a Name: Music Edition
What band was called the "Prefab Four"?

Germanotta was born into an Italian American family in New York City. She learned music at an early age and was performing onstage in New York City clubs by the time she was a teenager. She attended an all-girls school, Convent of the Sacred Heart, in Manhattan before going on to study music at the Tisch School of the Arts at New York University. She studied at Tisch for two years before dropping out to manage her own career.

After dropping out, she began transforming herself from Germanotta into Lady Gaga, whose style combined glam rock and over-the-top fashion design. In 2007 she and performance artist Lady Starlight formed a revue called the Ultimate Pop Burlesque Rockshow. That same year Lady Gaga, who also wrote songs for other pop artists such as Fergie, the Pussycat Dolls, and Britney Spears, was signed by the singer Akon and Interscope Records and began preparing her debut album, The Fame, which was released in 2008.

Although she modeled herself on such theatrical performers as David Bowie during his Ziggy Stardust period, the New York Dolls, Grace Slick, and Freddie Mercury—her adopted stage name was derived from Queen’s song “Radio Ga Ga”—she created a character that came to occupy a unique space in the music world. Her fashion combined with her up-tempo, synthetic dance music and her edgy, theatrical performance to create stunning sounds and visuals. Indeed, while producing music, Lady Gaga also created her own sexually charged fashions—replete with dazzling wigs and space-age bodysuits—through her creative team Haus of Gaga.

Success: The Fame and The Fame Monster

Her first single, “Just Dance,” became popular in clubs throughout the United States and Europe and eventually landed at number one on the Billboard Pop Songs chart (also called the radio chart). Three other singles off The Fame—“Poker Face,” “LoveGame,” and “Paparazzi”—also reached number one on the radio chart, making Lady Gaga the first artist in the 17-year history of that chart to have four number ones from a debut album. The Fame was well received critically and proved enormously successful commercially, selling more than eight million copies worldwide by the end of 2009. The album also yielded Lady Gaga five Grammy nominations, including for album of the year and song of the year (“Poker Face”); she captured two Grammys—best dance recording (“Poker Face”) and best electronic/dance album (The Fame)—and her opening duet with Sir Elton John was among the most talked-about elements of the 2010 Grammys telecast. In February 2010 she also picked up three Brit Awards (the British equivalent of the Grammys)—for best international female, best album, and breakthrough act.

Her second album, The Fame Monster, was released in November 2009 (it was originally conceived as a bonus disc) and almost instantly produced another hit, “Bad Romance.” Other popular singles from the album followed, including “Telephone” (which featured Beyoncé, as did a nine-minute video produced by Jonas Åkerlund starring the pair and referencing Quentin Tarantino’s film Kill Bill: Vol. 1 [2003]) and “Alejandro.”

During 2010 Lady Gaga proved to be one of the most commercially successful artists, with a sold-out concert tour (which had been launched to coincide with the release of The Fame Monster), while she also headlined Chicago’s Lollapalooza music festival and played in front of a record 20,000 people at NBC’s Today show. She was named one of Time magazine’s 100 Most Influential People and was named by Forbes magazine as one of the world’s most powerful women, and she capped off 2010 by being named Billboard magazine’s artist of the year. After arriving at the 2011 Grammy Awards ceremony encased in a giant egg, Lady Gaga went on to claim honours for best pop vocal album (for The Fame Monster) and best female pop vocal performance and best short form video (for “Bad Romance”).

Lady Gaga’s third album, Born This Way (2011), found the entertainer reaching back to earlier musical eras for inspiration. As a blonde dance-pop performer with a penchant for provocation, Lady Gaga had often earned comparisons to the singer Madonna, and on the album’s first two singles the similarities were especially pronounced. The title track was a self-empowerment anthem in the style of Madonna’s 1989 single “Express Yourself,” while “Judas” brazenly mixed sexual and religious imagery. Both songs quickly became hits. Other tracks on the album featured guest appearances from guitarist Brian May of Queen and saxophonist Clarence Clemons of Bruce Springsteen’s E Street Band.

In 2013 Lady Gaga released Artpop. Although the energetic lead single “Applause” extended her string of chart successes, the album was perceived as a commercial disappointment. She came back the following year with Cheek to Cheek, a collection of standards that she recorded with Tony Bennett. The recording topped the Billboard 200 as well as the jazz and traditional jazz album charts, and it earned the Grammy for best traditional pop vocal album. The relatively understated Joanne (2016) performed poorly until Lady Gaga’s halftime Super Bowl performance in February 2017 brought it favourable attention.

In addition to recording music, Lady Gaga made occasional film appearances, notably in Machete Kills (2013) and Sin City: A Dame to Kill For (2014). She played a vampiric countess with no regard for life or suffering in the fifth season of the television show American Horror Story: Hotel (2015–16). For her performance in the anthology series, Lady Gaga received a Golden Globe Award. She also appeared in the sixth season, which aired in 2016. Lady Gaga garnered critical acclaim and an Oscar nomination for her first lead role, a guileless up-and-coming singer-songwriter in the 2018 remake of the movie A Star Is Born. She cowrote most of that movie’s songs, many of which she performed with costar and director Bradley Cooper. The lead single, “Shallow,” won two Grammy Awards and the Oscar for best original song.

Lady Gaga cultivated a devoted following, particularly among gay men (she acknowledged her own bisexuality), who became some of her most loyal fans. She became particularly outspoken on gay rights, especially same-sex marriage, and was a featured speaker at the 2009 National Equality March in Washington, D.C. 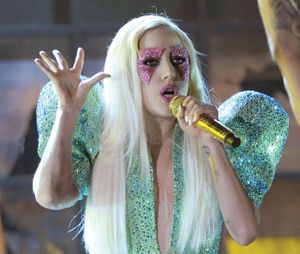