prime minister of Great Britain
verifiedCite
While every effort has been made to follow citation style rules, there may be some discrepancies. Please refer to the appropriate style manual or other sources if you have any questions.
Select Citation Style
Share
Share to social media
Facebook Twitter
URL
https://www.britannica.com/biography/Lord-Melbourne
Feedback
Thank you for your feedback

Join Britannica's Publishing Partner Program and our community of experts to gain a global audience for your work!
External Websites
Britannica Websites
Articles from Britannica Encyclopedias for elementary and high school students.
Print
verifiedCite
While every effort has been made to follow citation style rules, there may be some discrepancies. Please refer to the appropriate style manual or other sources if you have any questions.
Select Citation Style
Share
Share to social media
Facebook Twitter
URL
https://www.britannica.com/biography/Lord-Melbourne
Feedback
Thank you for your feedback 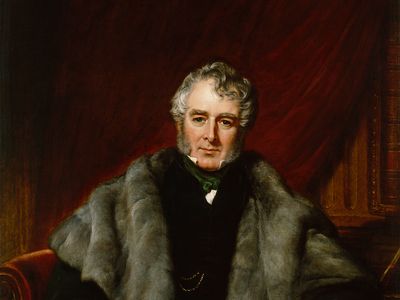 What was Lord Melbourne famous for?

Lord Melbourne was born William Lamb, allegedly the second of six children of the 1st Viscount Melbourne and his wife. Lamb married Lady Caroline Ponsonby (1805), who gave birth to their only surviving child, George Augustus Frederick, in 1807. The couple separated in 1825, years after Lady Caroline’s public affair with poet Lord Byron.

How was Lord Melbourne educated?

William Lamb (later Lord Melbourne) was educated at Eton College and at the University of Cambridge. He was called to the bar in 1804.

How did Lord Melbourne die?

Lord Melbourne was permanently weakened by a stroke on October 23, 1842, and died six years later.

Lord Melbourne, in full William Lamb, 2nd Viscount Melbourne of Kilmore, Lord Melbourne, Baron of Kilmore, Baron Melbourne of Melbourne, (born March 15, 1779, London, England—died November 24, 1848, Brocket, near Hatfield, Hertfordshire), British prime minister from July 16 to November 14, 1834, and from April 18, 1835, to August 30, 1841. He was also Queen Victoria’s close friend and chief political adviser during the early years of her reign (from June 20, 1837). Although a Whig and an advocate of political rights for Roman Catholics, he was essentially conservative. Not believing that the world could be bettered through politics, he was always more interested in literature and theology.

Lamb’s mother, Elizabeth (née Milbanke), was a confidante of the poet Lord Byron and an aunt of Byron’s future wife Anne Isabella (“Annabella”) Milbanke. It was widely believed that the 1st Viscount Melbourne was not Lamb’s real father. In June 1805 Lamb married Lady Caroline Ponsonby, the eccentric daughter of Frederic Ponsonby, 3rd earl of Bessborough. The marriage had failed even before Lady Caroline’s affair with Byron in 1812–13, and, after several estrangements and reconciliations, it ended in separation in 1825, three years before her death. Subsequently, Lamb was named as corespondent in two unsuccessful divorce suits, the second, in 1836, involving the poet Caroline Norton.

Called to the bar in 1804, Lamb entered the House of Commons in 1806. From 1822 he was an avowed supporter of the conservatism of George Canning. From April 1827 to May 1828, in the governments of Canning and Arthur Wellesley, 1st duke of Wellington, he served as chief secretary for Ireland. In 1829 he succeeded to the viscountcy. As home secretary in the 2nd Earl Grey’s ministry (November 16, 1830–July 8, 1834), he reluctantly supported the parliamentary Reform Act of 1832 but forcibly repressed agrarian and industrial radicals, notably the Tolpuddle Martyrs in 1834. Consistent with this, he opposed, while prime minister, the reduction of duties on imported grain.

Melbourne’s brief first administration ended with his dismissal by King William IV, who was offended by Whig plans for church reform. But Sir Robert Peel’s Conservatives failed to win a parliamentary majority, and Melbourne took office as prime minister once more. After Victoria’s accession he also became her private secretary for a time. Their mutual affection led to Victoria’s Whig partisanship. On May 7, 1839, during the crisis over the “bedchamber question” (the queen insisted her attendants be Whig ladies), Melbourne resigned but soon resumed office when Peel could not form a government.

By early 1840 Great Britain was divided over industrial depression and Chartism (a working-class radical movement) and was fighting wars in China and Afghanistan. Later that year the firm stand of Melbourne and his foreign secretary, Lord Palmerston, averted war with France over Syria. As his parliamentary support dwindled, Melbourne tried to prepare the queen for dealing with a Conservative government unwelcome to her and wisely insisted that she permit her husband, Prince Albert, to assume state responsibilities. He left office after the Conservatives had won the general election of 1841 and was permanently weakened by a stroke on October 23, 1842. He died without children, and the viscountcy went to his brother Frederick James Lamb.

This article was most recently revised and updated by Erik Gregersen.