Jude Law, 48, cuts a casual figure in funky round sunglasses as he steps out with wife Phillipa Coan, 36, and his sixth child to grab coffee

By Bryony Jewell For Mailonline

He confirmed they'd welcomed their first child together back in September.

And Jude Law cut a very laid back figure as he stepped out with his wife Phillipa Coan, 36, and their baby to grab coffee in London on Sunday.

The actor, 48, showcased his quirky sense of style in funky round sunglasses and seemed to be in good spirits as he enjoyed some family time in the sunshine. 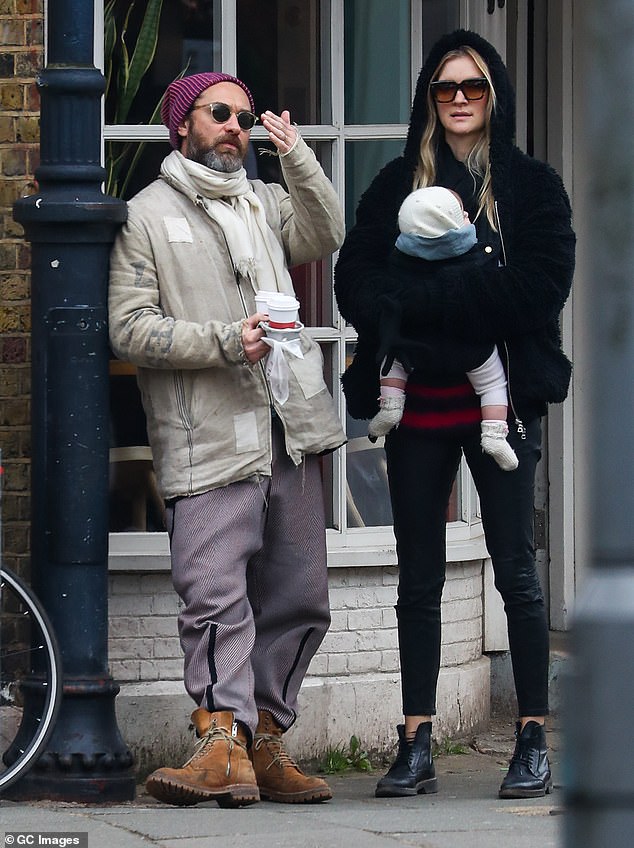 Family outing: Jude Law cut a casual figure as he stepped out with his wife Phillipa Coan, 36, and their baby to grab coffee in London on Sunday

The actor looked relaxed as he rested against a lamppost and chatted to his wife during the outing.

Jude donned a cream jacket with grey lettering on the sleeves and frayed edges as well as some comfortable patterned trousers and brown boots.

The father-of-six accessorised his laid-back look with a bright beanie hat which boasted hues of neon pink and some funky round sunglasses.

Behavioural psychologist Phillipa also opted for a low-key look in jeans and a fluffy black jacket, with the new mum wearing their young baby in a carrier on her front. 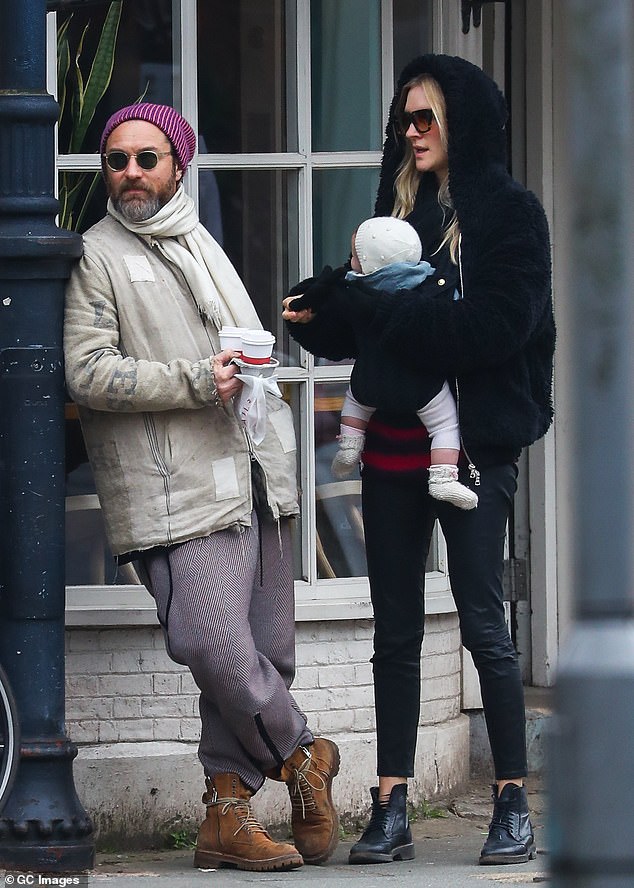 Casual: The actor, 48, relaxed against a lamppost while chatting with his behavioural psychologist wife, who was wearing their first child together in a black baby carrier

Jude and Phillipa have not revealed the name or gender of their child, but the actor confirmed he had welcomed his first child with his wife of nearly two years in September.

The screen star revealed the happy news during an interview with Jimmy Fallon on The Tonight Show.

When asked what he's been up amid quarantine, the thespian said: 'I've been gardening. Oh! And on top of that I had a baby. So there you go.'

The media personality shared that he and brainbox Phillipa felt 'blessed that they could just nest as a family.' 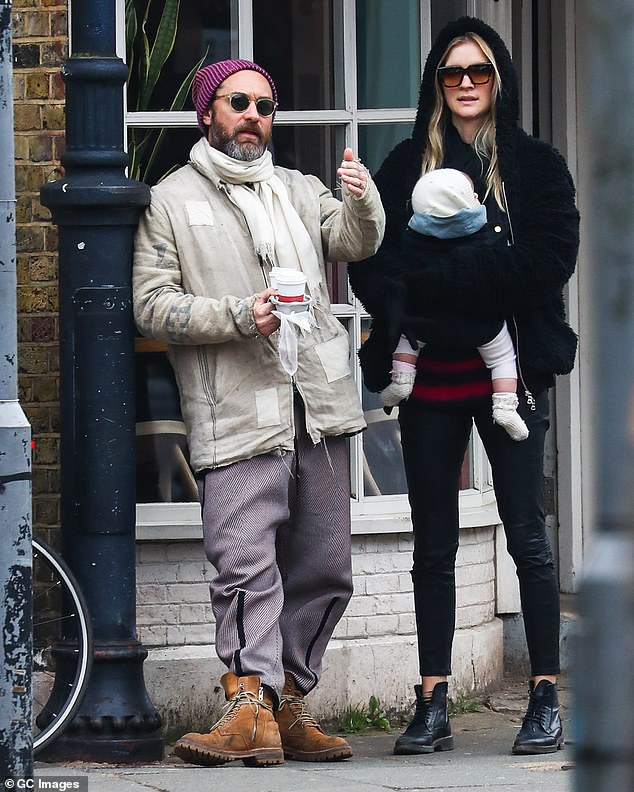 Chatting away: The couple have not yet revealed their baby's name or gender but Jude confirmed the tot's arrival back in September

Share Follow
If you make a purchase using links on this page, DailyMail.com will earn an affiliate commission 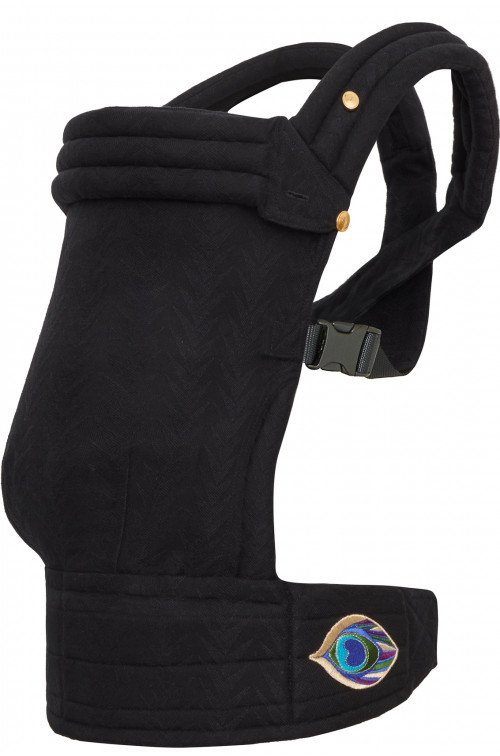 Phillipa Coan is a rather stylish mum isn’t she?

She’s pictured here with the newest addition to her family all snuggled up in an Artipoppe carrier.

In case you haven't heard of it, Artipoppe is THE baby carrier brand to be seen with. Just ask Myleene Klass, Rachel Riley, Millie Mackintosh, Lucy Mecklenburgh, Jessica Alba, Vincent Cassel, Nick Carter... the list of famous fans goes on and on!

This black design features a subtle arrow print in a vegan fabric and will give your little one all the support they need. Click (right) to buy it now.

Or check out the best of the rest in our edit below. 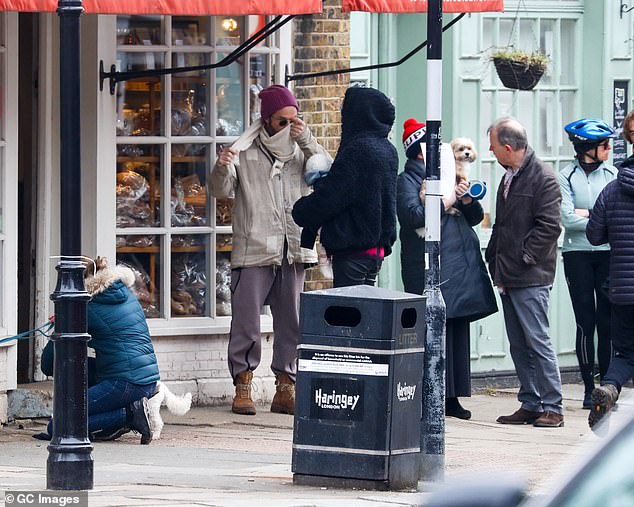 Weekend activities: Jude and Phillipa queued for coffee as they made the most of the sunny weather in the British capital

Jude and Phillipa were first spotted together at the Hay literary festival in 2015, and married at Old Marylebone Town Hall in 2019 before partying in Mayfair – three months after he announced their engagement.

After the baby news came to light, a friend of the pair said: 'He and Phillipa are blissfully happy together and delighted to add to their family. Everyone is really excited for the new arrival.'

Jude was previously married to actress and designer Sadie Frost, but the pair divorced in 2003. They have three children – Rafferty, 24, Iris, 20, and Rudy, 18.

He also has daughter, Sophia, 11, with model Samantha Burke, and another daughter called Ada, five, with singer-songwriter Catherine Harding. 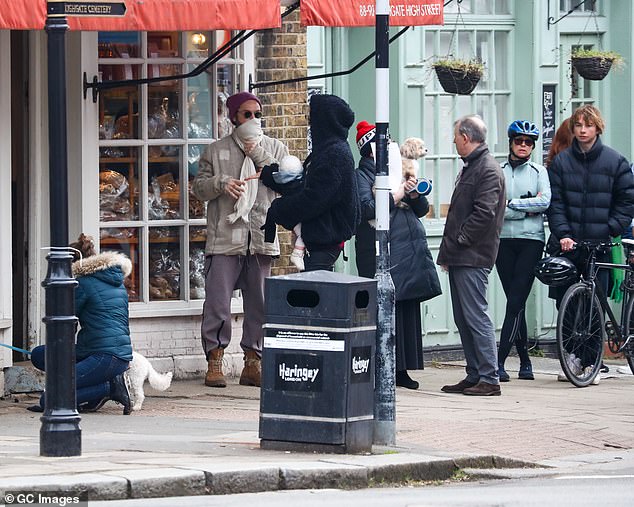 Staying safe: The father-of-six pulled his scarf over his mouth as they approached the shop as to adhere to Covid guidelines

Jude Law, 48, steps out with wife Phillipa Coan, 36, and their baby to grab coffee