You have reached the cached page for https://www.amazon.com/Journey-West-Demons-Strike-Blu-ray/dp/B06XVMXGP1
Below is a snapshot of the Web page as it appeared on 2/28/2021 (the last time our crawler visited it). This is the version of the page that was used for ranking your search results. The page may have changed since we last cached it. To see what might have changed (without the highlights), go to the current page.
You searched for: +Journey to the West: The Demons Strike Back We have highlighted matching words that appear in the page below.
Bing is not responsible for the content of this page.
Amazon.com: Journey to the West: The Demons Strike Back [Blu-ray]: Kris Wu, Kenny Lin, Chen Yao, Hark Tsui, Stephen Chow, Alibaba Pictures Group; China Film Group Corporation (CFGC); Star Overseas: Movies & TV 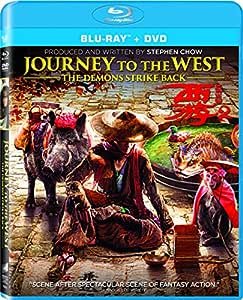 Secure transaction
Your transaction is secure
We work hard to protect your security and privacy. Our payment security system encrypts your information during transmission. We don’t share your credit card details with third-party sellers, and we don’t sell your information to others. Learn more
Details
Ships from
Amazon
Sold by
The Amazing Express
Journey to the West: The ... has been added to your Cart
New & Used (17) from
$9.86 & FREE Shipping

Journey to the West: The Demons Strike Back [Blu-ray]

The Monkey King is back in this sequel to the 2013 Stephen Chow film JOURNEY TO THE WEST: CONQUERING THE DEMONS. Now tamed by Tang Sanzang, Monkey King has become one of Tang's disciples. Tang, Monkey King, Sandy and Pigsy band together to fight demons as they continue their journey west.

4.4 out of 5 stars
4.4 out of 5
536 global ratings
How are ratings calculated?
To calculate the overall star rating and percentage breakdown by star, we don’t use a simple average. Instead, our system considers things like how recent a review is and if the reviewer bought the item on Amazon. It also analyzes reviews to verify trustworthiness.
Top reviews

Timothy D. Gallagher
4.0 out of 5 stars A sequel as good as the original film
Reviewed in the United States on June 19, 2017
Verified Purchase
A worthy follow-up to Steven Chow's 2013 film, this one sticks closer to the Monkey King story and lacks it's predecessor's downbeat ending. Monk Tang is again the main character in this film, but there's plenty of Sun Wukong action as well. I was initially thrown off by the re-casting of the roles, but the actors do a great job. At least the gorgeous She Qi re-prised her role from the first film, if only for a brief cameo. The combination of writer/producer Steven Chow and writer/director Tsui Hark serves the film well. There is a lot of imagination and color on the screen at all time, and the film kept my attention at al times. And they even managed to sneak in the episode with the spider demons, which was the basis for the old Shaw Brothers' Monkey King film "The Cave of Silken Web!" Plus, there were plenty of times when I broke out in belly laughs, which I've come to expect from any of Steven Chow's films. I definitely enjoyed this film more than "The Monkey King 2" with Aaron Kwok, which was released around the same time. I have to state, though, that if you do not have at least a slight familiarity with the Monkey King story you will probably be lost watching this film.
Read more
15 people found this helpful
Helpful
Report abuse

D. Lin
3.0 out of 5 stars Only for Stephen Chow comedy fans
Reviewed in the United States on June 16, 2017
Verified Purchase
Even as a Chinese viewer, the sequel is never as well made as the initial movie. Being the second film in the series, the casting changes since the first movie were already irksome, add onto it, the even sillier screenplay (which is saying a lot when contrasted with the silliness preset by the first movie).

Is it a bad movie? No.
Does it require the suspension of disbelief as common to a Stephen Chow comedy? Yes.
Should you be familiar with the tale of Journey to the West? Most definitely.

Jimm
3.0 out of 5 stars Not really a sequel to the first in anything but name
Reviewed in the United States on March 26, 2018
Verified Purchase
It’s not really a sequel to Steven Chow’s movie in anything but name and a superficial borrowing from the first “Journey to the West” with some flashbacks from the first flick.
The story, look, makeup, dialogue and characters don’t match the first one and the CG, soundtrack and cinematography don’t either.
It’s an ok movie but it’s not directed by Steven Chow and doesn’t have the same level of humor and cleverness to it.
It’s more like a B rate cash-in that Disney does with it’s straight to video sequels.
If you get it, get it with that in mind. It’s not completely terrible but it’s not anywhere near the same league as “Kung Fu Hustle” or its predecessor.
Read more
8 people found this helpful
Helpful
Report abuse

zerofaith
4.0 out of 5 stars A solid second outing though not quite as good as the first.
Reviewed in the United States on September 7, 2017
Verified Purchase
Humor, elaborate CGI action scenes, and colorful cast of demons, the 2nd movie in the chow journey to the west series is in many ways what you would expect if you enjoyed the first one. But while I did enjoy it, I would say its not quite as good as its predecessor. This is mostly due to scripting, where what proceeds doesn't correlate with what happens next. There's not much acting in the deception and without spoiling the whole first scene of the movie doesn't make sense in the context of the ending. Also the first one felt like a movie, and fantastic as the action sequences were, this outing feels more like a filler tv episode than a major arc (plot wise). I will say I have not read any of journey to the west so it is quite possible this is loyal to the original work so my review will only take the movie as the uncultured american watching it. Despite my nitpicks everything else that I liked about the first one is in here and with it the move is still quite enjoyable. The actors really nail the visual comedy providing performances that compliment the colorful and crazy world in which the story takes place. The Demons have different forms and the movie seems to spare no labor in transitioning them from one to the other as it sees fit. In the end what few flaws it has are eclipsed by the comedy and the set pieces which make the movie a fun journey indeed.
Read more
4 people found this helpful
Helpful
Report abuse

Kenneth E. Nahigian
3.0 out of 5 stars Fun but silly, best in small doses
Reviewed in the United States on March 25, 2019
Verified Purchase
Comes off as a poorly-written, badly-acted martial arts fantasy with lavish visuals and $millions expended on costumes and sets. Much of the awkwardness surely derives from the poorly translated English voice-overs and stylistic differences between Asian and Western cinematography. A heavy "Bollywood" influence is evident, and the title is an obvious riff on (tribute to?) the Star Wars movie. Full of cringe-moments. Even so, fun in small doses, especially if you're acquainted with the source legend (the Monkey King story). Watch with friends who share a love of martial arts fantasies, fortified with lots of pizza and beer, and don't hesitate to interrupt it with snide remarks à la Mystery Science Theatre 3000. Bottom line: stupid fun.
Read more
One person found this helpful
Helpful
Report abuse

Eric Hester
1.0 out of 5 stars The original was superb... this sequel is horrible.
Reviewed in the United States on April 18, 2018
Verified Purchase
Horrible sequel. Acting style is different from the original and not even the same characters but alot of flashbacks to the original movie which made it more obvious. Comedy in original was organic and flowed well... this release the comedy was contrived and forced out of context "just to be funny". I loved the original but I had to stop this one after 30 mins and throw it in the trash. Don't make the same mistake I did...
Read more
4 people found this helpful
Helpful
Report abuse

Duster 340
1.0 out of 5 stars Should have been named: Journey to the West, The Phantom Menace.
Reviewed in the United States on April 25, 2020
Verified Purchase
To paraphrase the great Rick Sanchez, this is a joyless cash grab. This film has no plot, no character development and no reason to exist. It is in no way shape or form like its predecessor. I lost nearly two hours of my life on this turkey. Just say no!
Read more
Helpful
Report abuse
See all reviews

Mr. P. Marcel
1.0 out of 5 stars Blu-Ray still listed as All Regions when it isn't
Reviewed in the United Kingdom on February 22, 2019
Verified Purchase
I bought this and received the BR... and had to send it back because it ISN'T All Regions. I don't understand how this hasn't been corrected yet.
Read more
Report abuse

MAURICIO RIVAS.
4.0 out of 5 stars Not bad but NOT JOURNEY.
Reviewed in Canada on January 21, 2021
Verified Purchase
Good movie but not close to it's papa the first JOURNEY TO THE WEST.
Read more
Report abuse

Deya H
1.0 out of 5 stars Just don't.
Reviewed in Canada on December 5, 2017
Verified Purchase
This film is terrible. I cant even begin to explain. Seller sent it within time frame. Disc was floating aboutabout in case.
Read more
Report abuse
See all reviews