A steam engine comes towards us as it crosses the Maidenhead Railway Bridge in the rain. Designed by Isambard Kingdom Brunel, the bridge was completed in 1838. We are looking east towards London as the train heads to the west. The exaggeratedly abrupt foreshortening of the viaduct, which our eye follows to the horizon, suggests the speed with which the train bursts into view through the rain. Turner lightly brushed in a hare roughly midway along the rail track to represent the speed of the natural world in contrast to the mechanised speed of the engine. The animal is now invisible as the paint has become transparent with age, but it can be seen in an 1859 engraving of the painting.

Turner frequently painted scenes of contemporary life and was particularly interested in industry and technology. As he often used new forms of transport, including steam trains, it is unlikely that the painting is a rejection of modernity. Instead, he saw both the train and the bridge as subjects worthy of being painted.

A steam engine rushes towards us as it speeds along a bridge through the rain. The bridge is the Maidenhead Viaduct, which crosses the Thames between Taplow and Maidenhead on the newly laid Great Western line to Bristol and Exeter. Designed by Isambard Kingdom Brunel, the viaduct was completed In 1838 and in use from July 1839. We are looking east towards London as the train heads towards the west of England. The arched bridge on the left is Taylor’s road bridge, built in the 1770s. The engine, of the ‘Firefly’ class, pulls a train of unroofed open-goods wagons in which passengers, paying the cheapest rates, could travel. Average engine speed on the Great Western Railway (GWR) in 1844 was 33 mph, but on long level stretches, such as the Maidenhead Viaduct, an unprecedented 60 mph could be reached – faster than any galloping horse.

The 1840s was a period of ‘railway mania’, and by 1844 the GWR had already constructed over 100 miles of line, which Turner could have travelled on during the previous six or seven years. We cannot be certain if this picture was inspired by a recent journey, or if he had travelled on this stretch of track. However, in an account told to the critic John Ruskin, Jane O’Meara (later Mrs John Smith) related how, as a young woman aged eighteen, she had been travelling to London on that line during a stormy night in June 1843. A fellow passenger – ‘with the most wonderful eyes’ – had leaned out of the train window for almost ten minutes when the train had come to a halt at Bristol during the storm. On seeing Rain, Steam and Speed at the Royal Academy, she claimed the passenger must have been Turner.

Even if Turner had not travelled on this line, he would have known contemporary engravings of trains moving diagonally and at speed through the landscape. These engravings may have given him the idea for a railway painting based upon the principles of perspective he had taught himself through his study of Poussin and Claude, and which he had included in his lectures as Professor of Perspective at the Royal Academy. Turner had previously used this type of diagonal recession with great effect – for example, in the dramatically foreshortened perspective of Westminster Bridge in The Burning of the Houses of Lords and Commons (1835, Philadelphia Museum of Art). Here he uses the exaggeratedly abrupt foreshortening of the viaduct, which our eye follows to the horizon, to suggest the speed with which the train bursts into view through the rain. Turner further accentuates this effect by reducing the double rail track across the bridge to a single narrow line.

The art historian John Gage observed: ‘the title of the picture makes clear that Turner was painting not a view of the Great Western Railway, but an allegory of the forces of nature.’ These forces of nature include the rain, which falls steadily but not so heavily as to entirely obscure the view or the gleams of sunlight that fall on the woods and fields either side of the bridge. Steam is represented by the three small puffs emerging from the engine’s funnel – in 1844 engines did not produce the great clouds of steam often associated with steam locomotives. Speed is most obviously embodied by the train itself, but Turner included another detail – a hare, running along the track ahead of it. A late addition, the hare was lightly brushed on top of the existing paint, roughly midway along the rail track, and is now invisible because the paint has become transparent with age. It can be seen in an 1859 engraving of the painting by Robert Brandard, who specifically sought to clarify details in the painting. According to the artist George Leslie, who as a boy had watched Turner putting the final touches to the painting the day before it went on public exhibition in 1844, the hare, not the train, was meant to represent speed. Turner further emphasises the theme of speed by including two small details. On the river on the left, you can see a small boat and, barely visible near the right edge of the picture, a man drives a horse-drawn plough. Both the boat and the plough are examples of relatively slow, non-mechanised activity. As in The Fighting Temeraire, Turner contrasts the pre-industrial with the modern.

Download a low-resolution copy of this image for personal use.

License and download a high-resolution image for reproductions up to A3 size from the National Gallery Picture Library.

This image is licensed for non-commercial use under a Creative Commons agreement.

Examples of non-commercial use are:

The image file is 800 pixels on the longest side.

As a charity, we depend upon the generosity of individuals to ensure the collection continues to engage and inspire. Help keep us free by making a donation today.

This is a YouTube video player. Below the video are the title, view time and description. Below that is a carousel of video thumbnails. Clicking a thumbnail will load and play that video. 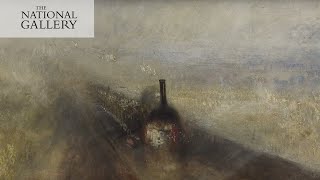 This is part of our 'Talks for All' series. Christina Bradstreet talks on J. M. W. Turner's 'Rain, Steam, and Speed - The Great Western Railway', painted in 1844.

(Showing 6 of 9 works)
Calais Pier
Joseph Mallord William Turner
A cross-channel ferry (a packet), fully laden with passengers and flying a British flag, is approaching the port of Calais. Around it, small French fishing boats (‘poissards’) head out to sea. The water is rough and dark storm clouds gather, although a shaft of sunlight breaks through to illumina...
Not on display
Dido building Carthage
Joseph Mallord William Turner
Turner’s painting of the North African city of Carthage, founded by Dido, its first queen, was inspired by Virgil’s epic poem, the Aeneid. The figure on the left dressed in blue and wearing a diadem is Dido herself, visiting the tomb that is being built for her dead husband, Sychaeus. The man in...
Room 36
Dutch Boats in a Gale ('The Bridgewater Sea Piece')
Joseph Mallord William Turner
Room 34
Margate (?), from the Sea
Joseph Mallord William Turner
As with many of Turner’s paintings that were never exhibited in his lifetime the title of this picture was not his choice, but was decided on some 50 years later. We can’t be sure that it shows the north Kent seaside town of Margate, but the white cliffs just visible on the horizon recall other v...
Not on display
Sun Rising through Vapour
Joseph Mallord William Turner
It is low tide in the early morning and fishermen unload their catch from a boat beached high and dry on the shore. Some people enjoy a meal. Others prepare the catch for sale. This human activity contrasts with the stillness of the glassy sea which, like a mirror, reflects the hazy sunlight. The...
Room 36

The Evening Star
Joseph Mallord William Turner
In contrast to many of Turner’s paintings – often full of activity, grand architectural settings, dramatic weather and dazzling effects of colour and light – this painting looks almost empty. The only figure is a barely visible young boy with a shrimping net over his shoulder, who wades in from t...
Not on display
The Fighting Temeraire
Joseph Mallord William Turner
Turner’s painting shows the final journey of the Temeraire, as the ship is towed from Sheerness in Kent along the river Thames to Rotherhithe in south-east London, where it was to be scrapped. The veteran warship had played a distinguished role in the Battle of Trafalgar in 1805, but by 1838 was...
Room 34
The Parting of Hero and Leander
Joseph Mallord William Turner
This picture illustrates an ancient Greek myth that was retold by later writers, including the English romantic poet, Lord Byron. Hero, a priestess of Aphrodite, lived in a tower on the Hellespont strait, which separates Europe from Asia. She was in love with Leander, a young man from the Asian s...
Not on display

Ulysses deriding Polyphemus - Homer's Odyssey
Joseph Mallord William Turner
The subject of this painting is taken from Book IX of Homer’s Odyssey. It shows Ulysses sailing from the island where Polyphemus, a one-eyed giant, had held him and his men captive. Wearing a helmet and a scarlet cloak, Ulysses raises his arms in victory as he stands on the deck of his ship, belo...
Room 34
You've viewed 6 of 9 paintings