Hello, your email is unverified. Please confirm for access to all your SPH accounts. RESEND VERIFICATION EMAIL

LAURA Sheldon, 36, co-owner of the LulaandGray store on Etsy.com, had a busy weekend, fulfilling dozens of orders for Queen Elizabeth II keepsakes following her death on Thursday (Sep 8).

Sheldon, whose store ships from Macclesfield, England, designed a small wooden token that has Elizabeth’s crown carved into it along with her name, and the dates “1926 - 2022“. The handmade token costs £3.90 (S$6.35) and comes with a Union Jack postcard that has facts about the queen.

“I actually designed them on Thursday night, and listed them then,” Sheldon said. “We had a single order for nearly 180 units on Sunday that will be distributed throughout nursing homes in the UK, and we have had 40 individual orders on Etsy and Amazon for them since Friday,” Sheldon said.

“The queen passing away is a massive moment in history, and we created these little keepsakes to pop into our children’s memory box for when they grow older.”

Other royal memorabilia is also selling fast, with mourners and fans on Amazon, eBay and Etsy buying everything from T-shirts and mugs to wooden plaques.

Britain’s longest-reigning monarch marked the 70th anniversary of her accession in February, with national celebrations held in June.

Your feedback is important to us

Tell us what you think. Email us at btuserfeedback@sph.com.sg

On Monday, the top three items sold on Amazon.co.uk in the prior 24 hours were 2 wooden wall decorations with the late queen’s face on them, and a Platinum Jubilee mug for £9.90).

The 10th most popular book on the website was a £9.99 hardcover copy of the book, Queen Elizabeth: A Platinum Jubilee Celebration, while No. 12 was Robert Hardman’s Queen of Our Times: The Life of Elizabeth II.

The No. 1 newly released item in Amazon’s Home & Kitchen department was a Union Jack-themed Queen Elizabeth II memorial flag for £5.89, made by a Chinese supplier called Shinfengzhou.

“We will see people wanting to have that memorabilia,” Linda Ellett, KPMG’s head of consumer markets, retail and leisure, said. “With pressure on people’s budgets, what we do see is the idea of being able to spend on smaller treats because they can’t buy big things like cars and houses ... I think this will be an occasion that people will want to remember.”

In Windsor, where the queen spent much of her time in recent years, souvenir seller Muthucumarasamy Kesavan also reported brisk trade.

“This is not just about business or money, but people want to carry something with the queen on it,” he said.

Kesavan, who moved to Britain from Sri Lanka in 1986, has been running his small shop next to the castle gates since 2011. He said souvenirs for King Charles would take “a couple of months” to hit the shelves because of import difficulties.

“We are trying, but still we couldn’t find anything ... bringing things from outside is not easy,” he said.

Meanwhile, some people are selling memorabilia related to the new king online. Suppliers have been quick to post listings on eBay for “God Save the King” banners, portrait prints, commemorative mugs and other items.

A copy of Highgrove: Portrait of an Estate by King Charles, signed by the author, was standing at £221 on eBay.com, with 5 days of the listing to go. The listing notes the “historical and monetary value of this item”.

The same seller, also listed a “hand-signed Christmas Card from 2002 featuring a photo of the King with Princes William and Harry, whose current bid is for £160.

BT is now on Telegram!

Will half a million free tickets save Hong Kong from tunnel vision?

THE Canadian economy grew by a surprise 0.1 per cent in August, buoyed by strong agricultural and retail activity, with...
09:04 PM
Companies & Markets

ENVIRONMENTAL, social and governance (ESG) funds in Asia (ex-Japan) recorded outflows of about US$660 million in the...

CHINA’S largest lenders have posted third-quarter profit rises of more than 4 per cent as their diverse lending...
08:42 PM
Government & Economy

Italian inflation surges in October ahead of eurozone figures

Exxon Mobil and Chevron amassed more than US$30 billion in combined net income as...

Singapore stocks end week on a high amid bargain hunting; STI up 1.5% on Friday

You have received a gift!
Unlock this subscriber-only story by signing up or log in to start reading.

Thank you for registering!
You have unlocked this subscriber-only story.

Limit reached!
You have reached your monthly limit of subscriber-only stories. To get full access, please subscribe now.

Link expired!
Your gift link for this subscriber-only story has expired. To get full access, please subscribe now.

Link invalid!
Please ensure that you have the correct link.

Subscribe to The Business Times Personal Edition at $9.90/month* 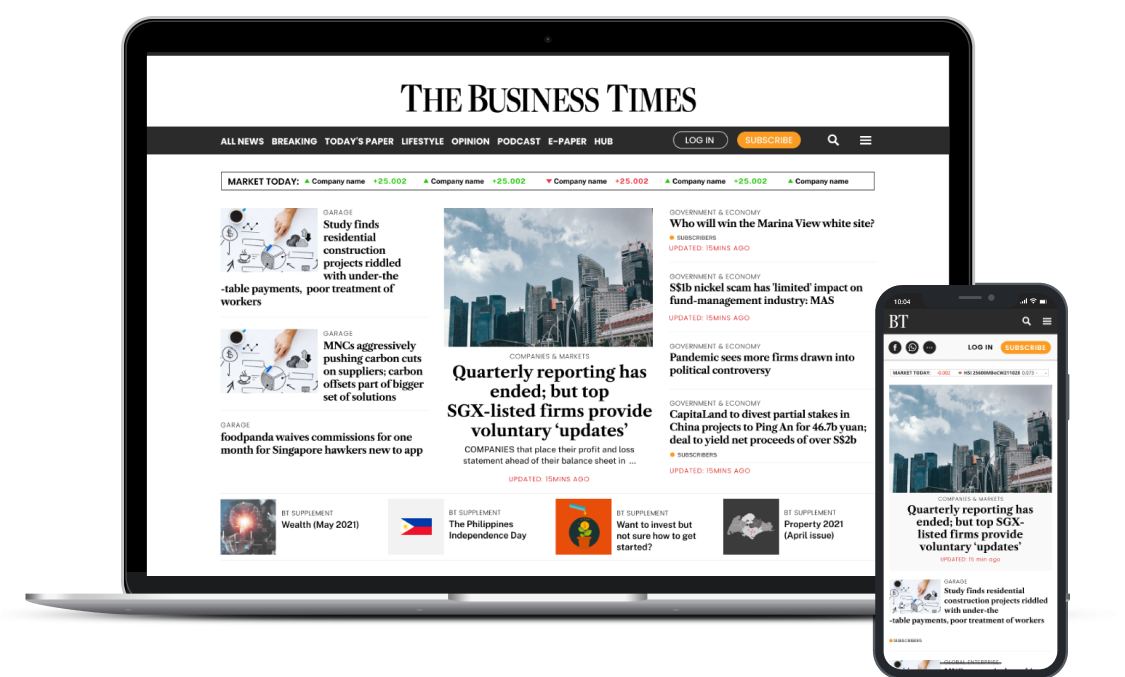 For a limited period, get a
6-MONTH subscription
to The Business Times
for just S$1/month.