president of United States
Alternate titles: Herbert Clark Hoover
Print
verifiedCite
While every effort has been made to follow citation style rules, there may be some discrepancies. Please refer to the appropriate style manual or other sources if you have any questions.
Select Citation Style
Share
Share to social media
Facebook Twitter
URL
https://www.britannica.com/biography/Herbert-Hoover
Feedback
Thank you for your feedback

Herbert Hoover, in full Herbert Clark Hoover, (born August 10, 1874, West Branch, Iowa, U.S.—died October 20, 1964, New York, New York), 31st president of the United States (1929–33). Hoover’s reputation as a humanitarian—earned during and after World War I as he rescued millions of Europeans from starvation—faded from public consciousness when his administration proved unable to alleviate widespread joblessness, homelessness, and hunger in his own country during the early years of the Great Depression.

Hoover was the son of Jesse and Hulda Hoover. His father was a hardworking blacksmith and farm-implement dealer and his mother an extremely pious woman who eventually adopted Quakerism. Amid the streams, woodlands, and rolling hills around West Branch, Iowa, the young Hoover enjoyed an almost idyllic childhood—until age six, when his father died from heart disease; his mother died of pneumonia three years later. The orphaned Herbert then left Iowa for Oregon, where he grew up in the home of John and Laura Minthorn, his maternal uncle and aunt. His parents’ character and religiosity and the trauma of his early childhood left an indelible mark on the young Herbert, instilling in him the self-reliance, industriousness, and moral concern for the needy, abandoned, and downtrodden that would characterize him for the rest of his life (his favourite book was David Copperfield). In classic Quaker fashion, his speech, dress, and demeanour were unadorned. Hoover was a member of the first class at Stanford University (1895). He graduated with a degree in geology and became a mining engineer, working on a wide variety of projects on four continents and displaying exceptional business acumen. Within two decades of leaving Stanford, he had amassed a personal net worth of about $4 million. 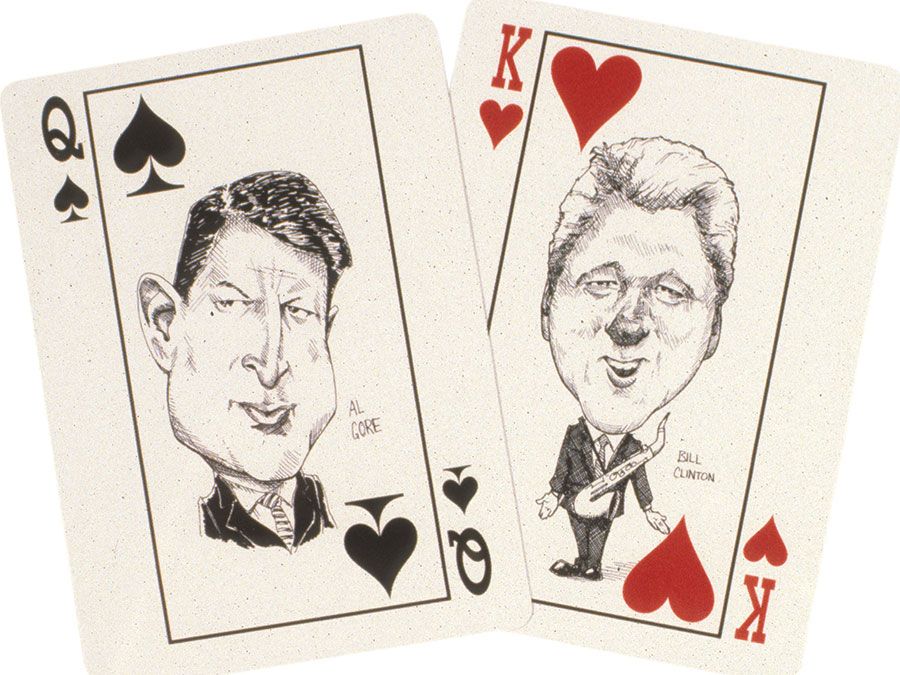 Britannica Quiz
Weird U.S. Presidents Quiz
What animal did Calvin Coolidge grant a presidential pardon to? Whose chair did John Adams and Thomas Jefferson vandalize to get souvenirs? Out of all the facts about presidents of the United States, these are some of the weirdest—how many do you know?

Caught in China during the Boxer Rebellion (1900), Hoover displayed his gift for humanitarian rescue by organizing relief for trapped foreigners. He drew on his China experience in 1914, when he helped Americans stranded in Europe at the outbreak of World War I. For the next three years, he headed the Commission for Relief in Belgium, overseeing what he called “the greatest charity the world has ever seen” and exhibiting impressive executive ability in helping to procure food for some nine million people whose country had been overrun by the German army. So skilled was Hoover’s performance that Pres. Woodrow Wilson appointed him U.S. food administrator for the duration of the war. Relying primarily on voluntary cooperation by the American public, Hoover won wide support for “wheatless” and “meatless” days so that as much of the nation’s agricultural output as possible could be sent to soldiers at the front. Recognized by war’s end as the “Great Engineer” who could organize resources and personnel to accomplish extraordinary acts of benevolence, Hoover was the natural choice to head the American Relief Administration. The ARA sent shiploads of food and other life-sustaining supplies to war-ravaged Europe—including Germany and Bolshevik Russia during the famine in that country in 1921–23. The outreach to Soviet Russia garnered Hoover much criticism, but he defended his actions on humanitarian grounds, saying, “Twenty million people are starving. Whatever their politics, they shall be fed.”

In 1921 President-elect Warren G. Harding chose Hoover to serve as secretary of commerce. In the Harding cabinet Hoover proved to be one of the few progressive voices in a Republican administration that generally saw little role for government other than assisting the growth of business. Hoover alienated many Old Guard Republican leaders as he vigorously supported U.S. membership in the League of Nations, collective bargaining rights for labour, and government regulation of such new industries as radio broadcasting and commercial aviation. Continuing as commerce secretary under Pres. Calvin Coolidge, Hoover spearheaded efforts that ultimately led to construction of Hoover Dam and the St. Lawrence Seaway. He illustrated his continuing dedication to humanitarian rescue when he supervised relief efforts during and after the Mississippi River flood of 1927.

When President Coolidge decided not to run for another term in 1928, Hoover received the Republican presidential nomination, despite the objections of conservatives opposed to his departure from the party’s traditional laissez-faire philosophy. In the ensuing campaign, Hoover and running mate Charles Curtis ran against New York Gov. Alfred E. Smith and vice presidential candidate Joseph T. Robinson in a contest that focused on Prohibition and religion. Smith opposed Prohibition, while Hoover remained equivocal, calling it an “experiment noble in motive.” Smith’s Roman Catholicism proved a liability, especially in the South, but the election outcome chiefly reflected the close identification in the public mind of the Republican Party with the enormous prosperity of the 1920s. Hoover captured more than 21 million popular votes to Smith’s approximately 15 million, and he received 444 electoral votes to his Democratic opponent’s 87. (See primary source document: Inaugural Address. See also Cabinet of President Herbert Hoover and United States presidential election of 1928.)

During the 1928 presidential campaign, Hoover said, “We are nearer today to the ideal of the abolition of poverty and fear from the lives of men and women than ever before in any land.” One year later the stock market cash of 1929 plunged the country into the worst economic collapse in its history. President Hoover parted ways with those leaders of the Republican Party—including Secretary of the Treasury Andrew Mellon—who believed there was nothing for the government to do but wait for the next phase of the business cycle. Hoover took prompt action. He called business leaders to the White House to urge them not to lay off workers or cut wages. He urged state and local governments to join private charities in caring for Americans made destitute by the Depression. He asked Congress to appropriate money for public-works projects to expand government employment. In 1931 he backed creation of the Reconstruction Finance Corporation (RFC, established 1932), a large-scale lending institution intended to help banks and industries and thereby promote a general recovery.

The nation’s economy failed to respond to Hoover’s initiatives. As the Depression worsened, banks and other businesses collapsed and poverty stalked the land, and the American people began to blame Hoover for the calamity. The homeless began calling their shantytowns “Hoovervilles.” Demands rose for greater government action, especially direct relief payments to the most impoverished of the millions of unemployed. Believing that a dole would prove addictive, sapping the will of Americans to provide for themselves, Hoover adamantly opposed direct federal relief payments to individuals. He was also a firm believer in a balanced budget, unwilling to plunge the federal government into massive debt through a welfare program. This is not to say that Hoover opposed assistance to those in need. For example, expenditures for American Indian schools and health care doubled during his administration, and this earned him accolades as the first president to recognize some basic Indian rights. Hoover also furthered the long-held Quaker interest in prison reform, alleviating prison overcrowding by building new penitentiaries and work camps, expanding educational opportunities for prisoners, and increasing the number of prisoners placed on parole. He also supported RFC loans to states for relief purposes, though this modest program did little to alleviate suffering or to stimulate economic recovery. Also largely ineffective—but sincerely pursued—was Hoover’s attempt to defuse international tensions by promoting disarmament negotiations at the London Naval Conference of 1930. Quaker pacifism undoubtedly spurred Hoover’s interest in the arms race and international disarmament, but, like his relief schemes on the home front that could hardly suppress or contain the Depression, these efforts failed to reduce world tensions or to prevent Japan’s invasion of Manchuria in 1931.

Hoover also made some critical mistakes in his handling of the Depression. In 1930, for example, he signed into law (against the advice of many leading economists) the Smoot-Hawley Tariff Act, which raised many import duties so high that foreign countries could not sell goods in the United States; as a result, those countries could not—or would not—purchase American goods at a time when the need for sales abroad had never been greater. More problems arose in 1932, when Hoover authorized General Douglas MacArthur to evict from Washington, D.C., the Bonus Army, a group of World War I veterans who had camped in the nation’s capital to pressure Congress into awarding a promised bonus many years in advance of the scheduled payout date. MacArthur greatly exceeded Hoover’s orders in using military force against the unemployed former soldiers. The result was a public relations nightmare for the president. Hoover’s silence regarding MacArthur’s excesses led the public to think that the president had been responsible for the brutality. The man who had enjoyed a worldwide reputation as a humanitarian now appeared heartless and cruel.

By the 1932 presidential campaign, Hoover was blaming the Depression on events abroad and predicting that election of his Democratic challenger, Franklin Delano Roosevelt, would only intensify the disaster. The electorate obviously thought differently, as Roosevelt captured nearly 23 million votes (and 472 electoral votes) to Hoover’s slightly less than 16 million (59 electoral votes). During the months between the election and the inauguration, Hoover attempted unsuccessfully to gain Roosevelt’s commitment to sustaining his policies. When he left the White House on March 4, 1933, Hoover was a defeated and embittered man.

Hoover and his wife—the former Lou Henry (Lou Hoover), also a Stanford-trained geologist—moved first to Palo Alto, California, and then to New York City, where they took up residence at the Waldorf Astoria Hotel. For the next 30 years, Hoover was closely identified with the most conservative elements in the Republican Party, condemning what he regarded as the radicalism of the New Deal and opposing Roosevelt’s attempts to take a more active role against German and Japanese aggression. He believed fascism lay at the root of government programs like the New Deal and argued so in The Challenge to Liberty (1934) and the eight-volume Addresses upon the American Road (1936–61). An ardent anticommunist and foe of international crusades, he opposed American entry into World War II (until the attack on Pearl Harbor) and denounced American involvement in the Korean and Vietnam wars. His last major activity was heading the Hoover Commission, under Presidents Harry Truman and Dwight D. Eisenhower, which aimed at streamlining the federal bureaucracy. The research-oriented Hoover Institution on War, Revolution, and Peace at Stanford University—founded in 1919 as the Hoover War Collection, a library on World War I—is named in his honour.

The Editors of Encyclopaedia Britannica This article was most recently revised and updated by Adam Augustyn.