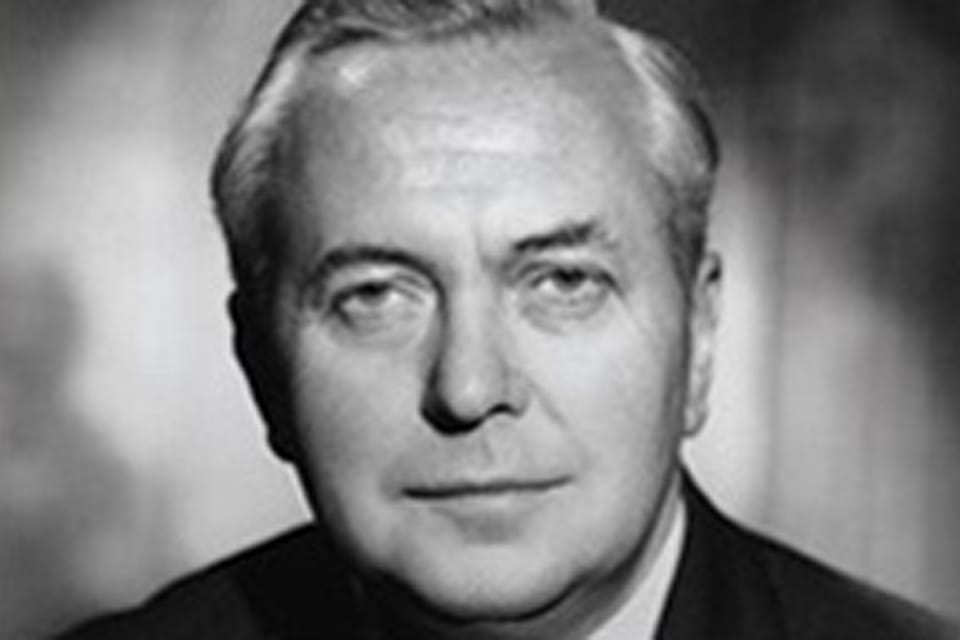 In 1969 he was struck in the eye by a stink bomb thrown by a schoolboy. Wilson’s response was "with an arm like that he ought to be in the English cricket XI″

Harold Wilson, the son of a chemist and teacher, was born in Yorkshire during the First World War. In 1924, aged 8, he visited 10 Downing Street, which would eventually become his home.

He studied Modern History for a year before transferring to Philosophy, Politics and Economics at Oxford University, graduating with a first class BA.

The Labour politician entered Parliament in 1945 as MP for Ormskirk and later becoming MP for Huyton. In 1947, then Prime Minister Clement Attlee made Wilson President of the Board of Trade. Aged 31, he had become the youngest member of the Cabinet in the 20th century.

Under Hugh Gaitskell’s leadership of the Labour party, Wilson served as Shadow Chancellor from 1955 to 1961, then as Shadow Foreign Secretary from 1961 to 1963. After Gaitskell passed away suddenly, Wilson fought and won a leadership contest against George Brown and James Callaghan. As Labour leader, he won 4 of the 5 General Elections he contested, although this includes a minority government.

His first election victory on 15 October 1964 saw him win with a small majority of 4, which increased significantly to 98 after a second General Election on 31 March 1966. As Prime Minister from 1964 to 1970, his main plan was to modernise. He believed that he would be aided by the “white heat of the technological revolution”. His government supported backbench MPs in liberalising laws on censorship, divorce, abortion, and homosexuality, and he abolished capital punishment. Crucial steps were taken towards stopping discrimination against women and ethnic minorities, and Wilson’s government also created the Open University.

In comparison, his outlook on foreign affairs was less modernising. He wanted to maintain Britain’s world role by keeping the Commonwealth united and nurturing the Anglo-American alliance. For example, his approach to the Vietnam War saw him skilfully balance modernist ambitions with Anglo-American interests when, despite repeated American requests, he kept British troops out while still maintaining good relations. Wilson biographer Philip Ziegler characterises his role as “honest broker”.

However, he had to fundamentally reshape Britain’s world role after inheriting an overstretched military and a £400 million balance of payments deficit, which caused successive sterling crises. To resolve these 2 interlinked problems, Wilson launched a Defence Review (1964 to 1965) and created the Department for Economic Affairs, which sought to implement an ambitious National Plan.

When sterling crises continued, Wilson was forced to devalue the pound in November 1967. Two months later, his government reluctantly announced Britain’s gradual withdrawal from the strategically important East of Suez. Despite his initial hesitation, Wilson recognised the value of membership of the European Economic Community (EEC), but his 1967 application was unsuccessful. Believing his popularity had increased, Wilson called a general election on 18 June 1970, but suffered defeat by the Conservative Party under Edward Heath.

Wilson held onto the Labour leadership. The next General Election on 28 February 1974 resulted in a hung parliament, and he formed a minority government. He called another election on 10 October 1974 at which he secured a small majority of 3.

He limited the damage caused by differing opinions within his party during renegotiation of the terms of Britain’s EEC membership. He also sought to resolve The Troubles between the nationalists and unionists in Northern Ireland but was ultimately unsuccessful.

On 16 March 1976, 5 days after his 60th birthday, he stunned the nation when he announced his intention to resign, a decision that he claimed he had made 2 years previously. James Callaghan, leader of the Labour Party, succeeded him to the role of Prime Minister.