Everything is Broken Part 1

Doctor of Medicine
City Coroner
Dr. Emily Grace was introduced as a recurring character and second female lead at the beginning of Season 5. She was brought in as a replacement for Dr. Ogden, as the coroner of the City Morgue, and became a main character in Season 6.

She quickly becomes a love interest for George Crabtree. However, in Season 7, they parted ways and George rekindles a romance with Edna Garrison. In Season 8, Emily meets Lillian Moss. The two women started courting right after episode 14 of the 8th season. In Season 9, Dr. Grace departs for England in Double Life, marking the last consecutive appearance for the character, as actress Georgina Reilly left the show.

Doctor Emily Grace's past is barely mentioned. In Murdoch Night in Canada is revealed that she had once been engaged to Jerome Bradley but broke it off after the invitations had been addressed but not yet mailed out. According to her former fiancé, she was a farm girl he tried to bring up to his station. In Evil Eye of Egypt, she is a member of the Toronto Women's Historical Society and later asks Julia to join a informal social group of women with modern ideas. Though once a member of the Toronto Athletic Club, she was no longer welcome after she broke off her engagement to her wealthy fiancé (ep.610). Dr. Grace is passionate about women's health (ep.507 and 508) and she is determined to open a clinic with Dr. Ogden. Although this plan never comes to fruition, she and Julia pass out information on reproductive health and team up again later to demand votes for women in Election Day.

In her first appearance, (ep.501), Emily starts out as a feisty, impatient and eager protégé of Dr. Ogden who learns the rules of the station house quickly. Throughout Season 5 there is growing chemistry as she becomes a romantic interest for George Crabtree. In  Twentieth Century Murdoch, George wants to ask Emily to attend the Policeman's Ball with him but is intimidated by her wealthy friends. To his surprise, she leaves her friends' party to see him at the ball and he wins a kiss on the cheek. In Season 6, during the evacuation of Toronto in Murdoch and the Cloud of Doom, George kisses her on the lips, thinking he would not have the chance again since they were going to die.

Emily is generally supportive of George's hair-brained schemes. She helps him try to capture a ghost on film in The Ghost of Queen's Park. When they are not successful she suggests a night under the stars looking for an apparition in another location. She is also usually willing to try the newfangled foods George discovers from pizza to hot dogs in Journey to the Centre of Toronto. George never learns of her humble upbringing, always assuming that she comes from privilege due to her friends and high level of education.

Emily and George's relationship is tested in Season 7 when George's on-screen kiss with Charlotte gets carried away in The Filmed Adventures of Detective William Murdoch, and later because of Dr. Grace's increasing infatuation with Darcy Garland's younger brother, Leslie Garland. She tries unsuccessfully to win George back after discovering that Leslie pretended to be James Gillies. He is unmasked as the one who threatened Julia and William. In Toronto's Girl Problem, it is revealed that Emily is attracted to another woman, as she passionately kisses her friend and fellow women's rights organizer, Lillian Moss at the end of the episode.

After George's arrest for the murder of Edna's husband, Archibald Brooks, Emily is clearly devastated, demonstrating that she still has affection for him while platonic. Her greatest challenge, however, is yet to come in Season 9.

In Season 9,Emily has decided that she will move with Lillian to England in order to participate in the more robust suffragette movement there. Their courtship is finally revealed to George and the rest of Station House 4. George sees Emily off in an emotional good-bye at the train station.

In The Murdoch Sting, Deneuve is a fictitious suspect for the murder of Ian Worthington created by stationhouse 4 and played by Emily. She is a "gold-digging French trollop" with a thick accent devised to flush out Eva Pearce's scheme. Deneuve unexpectedly "meets" Leslie Garland on her way out of the station house. Emily Grace decides she must kiss him in order to not reveal her true identity to Eva Pearce. Deneuve is arrested by Constable Crabtree but she threatens him with a gun. Crabtree and Deneuve's struggle ends with Deneuve appearing to accidentally shoot herself. After playing dead, Emily holds up a bag of blood she took from the morgue and used for effect. 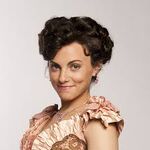 Just let me take a selfie...

Is that a rat? 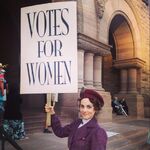 A fresh corpse and a crime scene, what more could one ask for?