You have reached the cached page for https://whitewolf.fandom.com/wiki/Giangaleazzo
Below is a snapshot of the Web page as it appeared on 3/30/2020 (the last time our crawler visited it). This is the version of the page that was used for ranking your search results. The page may have changed since we last cached it. To see what might have changed (without the highlights), go to the current page.
You searched for: +Gian Galeazzo Visconti We have highlighted matching words that appear in the page below.
Bing is not responsible for the content of this page.
Giangaleazzo | White Wolf | Fandom

Giangaleazzo, born Gian Galeazzo Visconti, is the Lasombra Prince of Milan. He is widely known for his spectacular defection from the Sabbat to the Camarilla, making him one of the single most reviled vampires on the Sabbat's list.

Giangaleazzo was Embraced in the 1400s by a Lasombra monk, who admired his resourcefulness and willpower. Soon after his Embrace, Giangaleazzo prospered among the undead, reveling in his new state as one of the dark lords of the night. His sire took him to the Convention of Thorns, where Diego was one of the few Lasombra who supported the Camarilla, thanks to an unpleasant encounter with a witch-hunter who had burned his face into a black ruin. After the formation of the Sabbat, Giangaleazzo played both sides cautiously against each other, trying to maintain his neutrality. After he betrayed his sire to the Sabbat, he was accepted into the sect and was crowned Archbishop of Milan, opening the city as a refugee for many European Sabbat who were on the run from the elders. For a time, Giangaleazzo believed in the Sabbat's creeds of freedom and warfare against the Antediluvians. Milan became a center for the Sabbat and many important sect meetings, like the one that formed the Code of Milan, were held in his domain. Alliances with the surrounding Camarilla and Giovanni domains, who did not want to challenge him, allowed Giangaleazzo to live his unlife in bloody debauchery.

In the 20th century, however, Giangaleazzo became disillusioned with the sect's simplicity and carnage, yearning for the machiavellian complexities of his life time. After a secret exchange of messengers with the Inner Circle, Giangaleazzo invited all Sabbat Kindred into his mansion for a wild ritus. After unfolding the last original copy of the Code of Milan, he declared that Milan would answer to the Camarilla from now on. Igniting the document and throwing it down to the howling mob, Giangaleazzo left his mansion while it was locked up and set on fire, effectively destroying the whole Sabbat population of the city. An extended Blood Hunt through the city purged nearly all remaining branches of the sect's influence, leaving Giangaleazzo to start anew.

By now, Giangaleazzo strives to built his city into a shining example of a Camarilla city, supported by a full cadre of Archons and war coteries that protect the city from angry Sabbat assaults. He allows Kindred of every Clan within his city, as long as they keep the Masquerade and answer to the Camarilla.

Considering character's biography in Children of the Night, Giangaleazzo is most likely a pseudonym for the historical figure Gian Galeazzo Visconti, a member of House Visconti who ruled the Duchy of Milan.

Path of Power and the Inner Voice 6 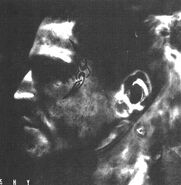 From Children of the Night. Art by Christopher Shy
Add a photo to this gallery

Retrieved from "https://whitewolf.fandom.com/wiki/Giangaleazzo?oldid=217372"
Community content is available under CC-BY-SA unless otherwise noted.