region, Europe
verifiedCite
While every effort has been made to follow citation style rules, there may be some discrepancies. Please refer to the appropriate style manual or other sources if you have any questions.
Select Citation Style
Share
Share to social media
Facebook Twitter
URL
https://www.britannica.com/place/Prussia
Feedback
Thank you for your feedback

Join Britannica's Publishing Partner Program and our community of experts to gain a global audience for your work!
External Websites
Britannica Websites
Articles from Britannica Encyclopedias for elementary and high school students.
print Print
Please select which sections you would like to print:
verifiedCite
While every effort has been made to follow citation style rules, there may be some discrepancies. Please refer to the appropriate style manual or other sources if you have any questions.
Select Citation Style
Share
Share to social media
Facebook Twitter
URL
https://www.britannica.com/place/Prussia
Feedback
Thank you for your feedback 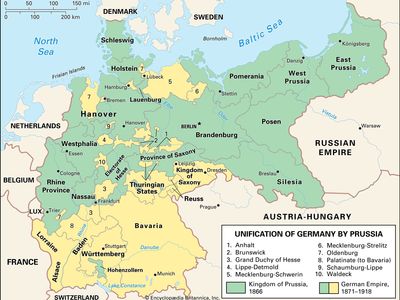 Prussia, German Preussen, Polish Prusy, in European history, any of certain areas of eastern and central Europe, respectively (1) the land of the Prussians on the southeastern coast of the Baltic Sea, which came under Polish and German rule in the Middle Ages, (2) the kingdom ruled from 1701 by the German Hohenzollern dynasty, including Prussia and Brandenburg, with Berlin as its capital, which seized much of northern Germany and western Poland in the 18th and 19th centuries and united Germany under its leadership in 1871, and (3) the Land (state) created after the fall of the Hohenzollerns in 1918, which included most of their former kingdom and which was abolished by the Allies in 1947 as part of the political reorganization of Germany after its defeat in World War II.

The original Prussians, mainly hunters and cattle breeders, spoke a language belonging to the Baltic group of the Indo-European language family. These early Prussians were related to the Latvians and Lithuanians and lived in tribes in the then heavily forested region between the lower Vistula and Neman rivers. Their social organization was loose—although some elements of stratified society can be traced—and they were pagans. Early attempts to convert the Prussians to Christianity—notably those made by Saint Adalbert and Saint Bruno of Querfurt at the turn of the 11th century—were unsuccessful. In the 13th century, however, the Prussians were conquered and Christianized by the German-speaking knights of the Teutonic Order, which had been awarded Prussian lands by the Polish duke Conrad of Mazovia for help against Prussian incursions. The Prussian countryside was subdued, castles were built for German nobility, and many German peasants were settled there to farm the land. By the middle of the 14th century, the majority of the inhabitants of Prussia were German-speaking, though the Old Prussian language did not die out until the 17th century. By the 17th century the indigenous population was thoroughly assimilated.

The latter part of the 14th century was characterized in eastern Europe by a strong reaction among Slavs and Balts against the Germans. Poland and Lithuania formed their first dynastic union in 1386 and, in the 15th century, defeated the Teutonic Knights in a series of wars. By the Second Treaty of Toruń (1466) the Polish crown acquired direct sovereignty over the Teutonic Order’s former possessions to the west of the lower Vistula River, together with the Kulmerland (or Chełmno district) and Ermland (Warmia) to the east; and that part of Prussia east of the Vistula River (i.e., East Prussia) was left to the order only on condition that the grand, or high, master should hold it as fief of the Polish crown. The lands along the Vistula, under Polish sovereignty, became known as Royal Prussia; thus a wedge of predominantly Polish-speaking territory came to be consolidated between German-speaking East Prussia and the German Reich to the west.

Ducal Prussia and the Kingdom of Prussia, to 1786

The Teutonic Order’s last grand master in Prussia, Albert of Hohenzollern, became a Lutheran and, in 1525, secularized his fief, which he transformed into a duchy for himself. Thereafter until 1701 this territory (i.e., East Prussia) was known as Ducal Prussia. When Albert’s son and successor, Albert Frederick, died sonless in 1618, the duchy passed to his eldest daughter’s husband, the Hohenzollern elector of Brandenburg, John Sigismund.

The union of Ducal Prussia with Brandenburg was fundamental to the rise of the Hohenzollern monarchy to the rank of a great power in Europe. John Sigismund’s grandson Frederick William of Brandenburg, the Great Elector (reigned 1640–88), obtained by military intervention in the Swedish-Polish War of 1655–60 and by diplomacy at the Peace of Oliva (1660) the ending of Poland’s suzerainty over Ducal Prussia. This made the Hohenzollerns sovereign over Ducal Prussia, whereas Brandenburg and their other German territories were still nominally parts of the Reich under the theoretical suzerainty of the Holy Roman emperor. Frederick William was also able to set up a centralized administration in Prussia and to wrest control of the duchy’s financial resources from the nobility.

The most significant achievement of the Great Elector’s son Frederick (reigned 1688–1713) was to secure the royal dignity for himself as Frederick I, king in Prussia, crowning himself at Königsberg (now Kaliningrad, Russia) on January 18, 1701. Thereafter, the other Hohenzollern possessions, though theoretically remaining within the German Reich and under the ultimate overlordship of the Holy Roman emperor, soon came to be treated in practice rather as belonging to the Prussian kingdom than as distinct from it.

Frederick I’s son Frederick William I began his reign in 1713 shortly before the conclusion of the Treaty of Utrecht, which assigned to him not only the so-called Upper Quarter of Geldern on the Meuse River but also the principality of Neuchâtel and Valengin on the border of France and Switzerland. Through participation in the Second Northern War, he further acquired much of western Pomerania (1720).

Frederick William I endowed the Prussian state with its military and bureaucratic character. He raised the army to 80,000 men (equivalent to 4 percent of the population) and geared the whole organization of the state to the military machine. One half of his army consisted of hired foreigners. The other half was recruited from the king’s own subjects on the basis of the “canton system,” which made all young men of the lower classes—mostly peasants—liable for military service. While the upper bourgeoisie was exempted from military service, the nobles were under a moral obligation, which the king repeatedly emphasized, to serve in the officers’ corps.

The close coordination of military, financial, and economic affairs was complemented by Frederick William I’s reorganization of the administrative system, and he came to control the whole life of the state. His autocratic temperament and his fanatical addiction to work found expression in complete absolutism. To his son and successor, Frederick II (the Great), he left the best-trained army in Europe, a financial reserve of 8,000,000 thalers, productive domains, provinces developed through large-scale colonization (particularly East Prussia), and a hardworking, thrifty, conscientious bureaucracy.

Frederick II (reigned 1740–86) put the newly realized strength of the Prussian state at the service of an ambitious but risky foreign policy. Hailed by Voltaire as “the philosopher king” personifying the Enlightenment and its ideal of peace, Frederick astonished Europe within seven months of his accession to the throne by invading Silesia in December 1740. This bold stroke precipitated the War of the Austrian Succession, and the Austro-Prussian Silesian Wars continued, with uneasy intermissions, until the end of the Seven Years’ War in 1763. Silesia, a rich province with many flourishing towns and an advanced economy, was an important acquisition for Prussia. Frederick’s wars not only established his personal reputation as a military genius but also won recognition for Prussia as one of the Great Powers.

Besides Silesia, Frederick also acquired East Frisia on the North Sea coast, and later, at the First Partition of Poland in 1772, he obtained West Prussia, that is, Polish Royal Prussia, thus forming a territorial link between East (Ducal) Prussia and the rest of his domains to the west.

NASA engineers asked Sally Ride if she needed 100 tampons for her first trip into space, which lasted six days.
See All Good Facts

Frederick made no substantial changes in the administrative system as organized by his father, but he did effect improvements in the judicial and educational systems and in the promotion of the arts and sciences. The freedom of conscience that Frederick instituted was the product not merely of his own skeptical indifference to religious questions but also of a deliberate intention to bring the various churches together for the benefit of the state and to allow more scope to the large Roman Catholic minority of his subjects in relation both to the Protestant majority and to the Evangelical establishment.