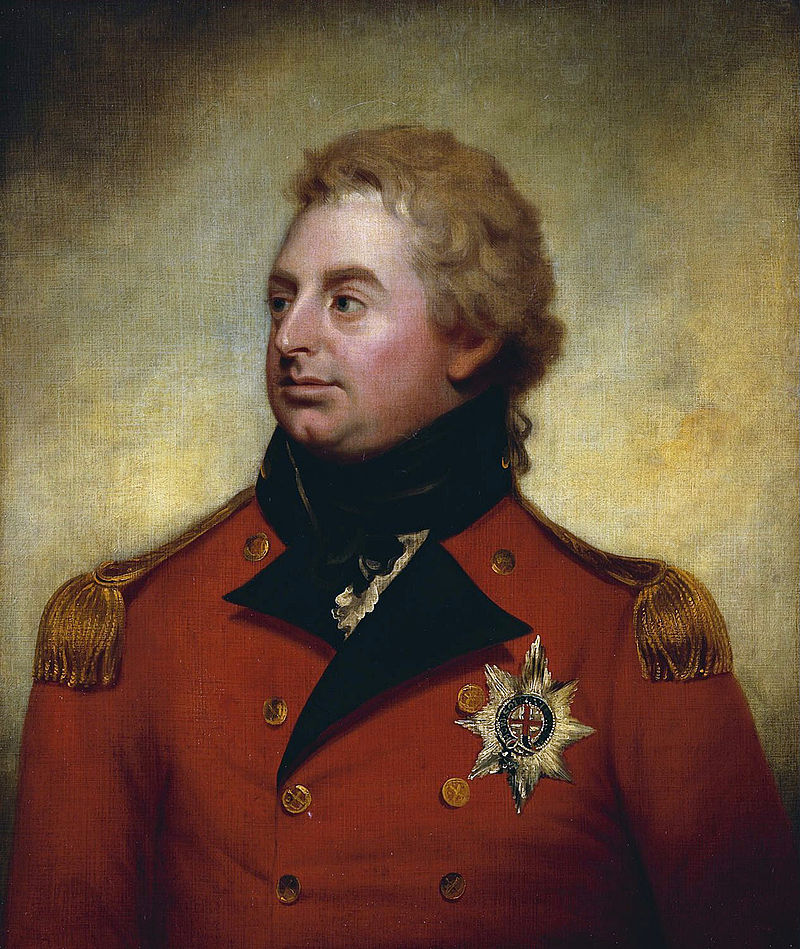 Prince Frederick, Duke of York was born on August 16, 1763, at St. James Palace in London, England. He was the second son and the second of the fifteen children of King George III of the United Kingdom and Charlotte of Mecklenburg-Strelitz. At the time of his birth, his father King George III was the reigning monarch and baby Frederick was second in the line of succession after his elder brother George.

The infant prince was christened Frederick Augustus on September 14, 1763, in the Presence Chamber at St James’s Palace by Thomas Secker, Archbishop of Canterbury. His godparents were: 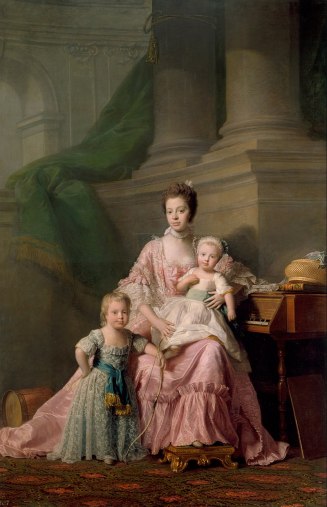 Frederick with his mother Queen Charlotte and his older brother George (left), painted by Allan Ramsay in 1764; Credit – Wikipedia

Queen Charlotte painted by Benjamin West in 1779 with her 13 eldest children; Credit – http://www.royalcollection.org.uk

When Frederick was six months old, he was elected Prince-Bishop of Osnabrück in Lower Saxony. The Bishopric of Osnabrück was ruled alternately by a Catholic bishop and a Protestant bishop from the Duchy of Brunswick-Lüneburg under the provisions of the Peace of Westphalia. King George III as Elector of Hanover alternated the selection of the bishopric with the Catholic Archbishop of Cologne. Frederick was created Knight of the Most Honorable Order of the Bath in 1767 and a Knight of the Order of the Garter in 1771.

Frederick was brought up and educated with his elder brother George, Prince of Wales (the future King George IV) at Kew Palace. Robert Darcy, 4th Earl of Holderness was their governor and William Markham, Bishop of Chester was their chief tutor. After Markham became Archbishop of York, Richard Hurd, Bishop of Worcester became the princes’ chief tutor. The young princes spent eight hours a day with their tutors and learned to ride and fence.

In 1780, King George III decided that Frederick would have a career in the army and made the 17-year-old a colonel. Shortly after Christmas 1780, Frederick was sent off to Hanover for military training under the supervision of Lieutenant-Colonel Robert Fulke Greville. The people of Hanover had not seen their Elector since the reign of King George II, so they enthusiastically welcomed their Elector’s second son.

From 1781 to 1787, Frederick lived in Hanover, where he participated in maneuvers with the Austrian and Prussian armies and attended the University of Göttingen with his brothers Edward, Ernest, Augustus, and Adolphus. While in Hanover, Frederick was swiftly promoted in the army.

Frederick was created Duke of York and Albany and Earl of Ulster on November 27, 1784, and became a member of the Privy Council. On his return to England in 1787, Frederick, as Duke of York, took his seat in the House of Lords. In the summer of 1788, King George III’s mental health deteriorated, possibly as the result of the hereditary disease porphyria, and Parliament began debating a regency. On December 15, 1788, in the House of Lords, Frederick strongly opposed the Regency Bill proposed by William Pitt in a speech supposedly inspired by George, Prince of Wales.

On September 29, 1791, in the Charlottenburg Palace in Berlin, Kingdom of Prussia now in the German state of Brandenburg, Frederick married Princess Frederica Charlotte of Prussia, daughter of King Friedrich Wilhelm II of Prussia and his first wife Elisabeth Christine of Brunswick-Lüneburg.  When the new Duchess of York arrived in London, she received an enthusiastic welcome. A second marriage was held on November 23, 1791, at the Queen’s House (now Buckingham Palace) because the Archbishop of Canterbury was not authorized to grant a license for a ceremony held in Prussia. The marriage was unsuccessful. Frederick was unfaithful and the couple was unable to have children. In 1794, the couple separated and Frederica lived out her life at Oatlands Park in Weybridge, Surrey England. Frederick and Frederica remained on good terms and the couple never caused any scandal. Frederica did not like London and did not get involved in the quarrels of her in-laws, instead, she spent her time in Weybridge helping the needy. 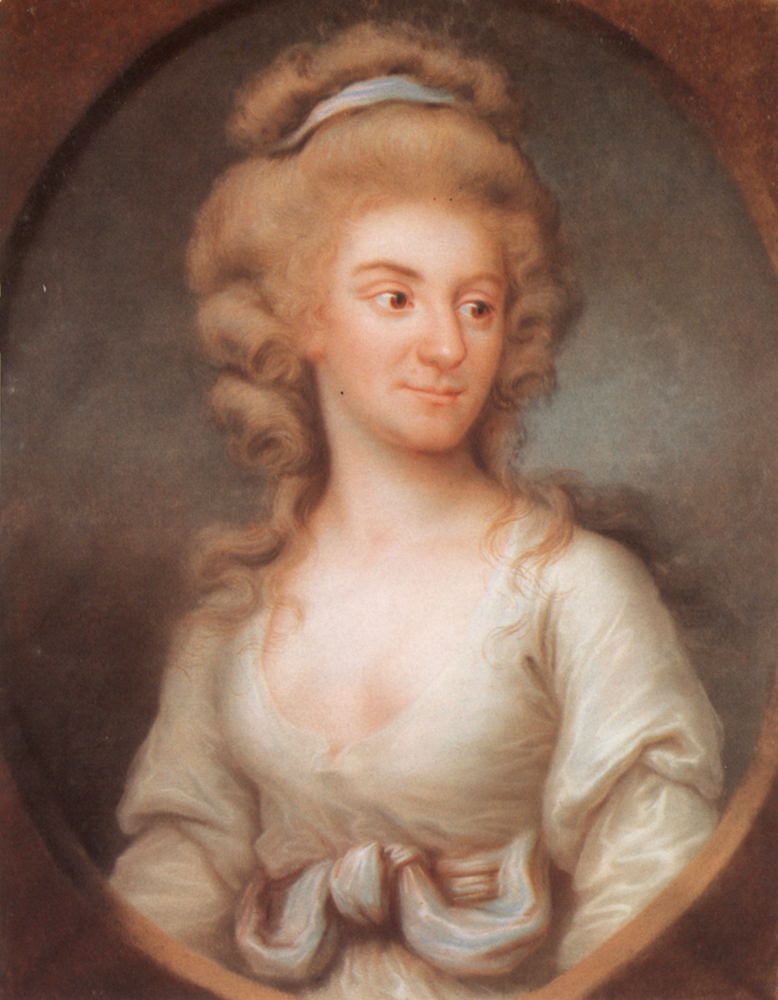 In 1793, Frederick was promoted to full general. In that same year, the Flanders Campaign began and lasted until 1795. It was a coalition of military forces along the French borders, with the goal to invade France and end Napoleon’s French First Republic. Frederick was the commander of the British forces and took part in the successful Siege of Valencienne in July of 1793. After a few more successes and several defeats, Frederick was recalled to England in 1795. Ultimately, the coalition was unable to advance beyond the French border fortresses and was eventually forced to withdraw.

A well-known nursery rhyme is supposedly about Frederick’s defeat at the Battle of Tourcoing during the Flanders Campaign.

Frederick was promoted to Field Marshal and made Commander-in-Chief of the Forces of Great Britain and Ireland in 1795. As Commander-in-Chief, Frederick instituted a number of reforms in the British Army. In 1801, he supported the founding of the Royal Military College, Sandhurst for training infantry and cavalry officers. He was also in charge of the preparations against Napoleon’s planned invasion of the United Kingdom in 1803. Frederick’s program of reforms enabled a stronger British Army to serve with the armies of other countries in the Peninsular War that finally defeated Napoleon.

In 1803, Frederick started an affair with Mary Anne Clarke.  In 1809 charges were brought up against Frederick in the House of Commons by Gwyllym Wardle, Member of Parliament for Okehampton, that Frederick allowed Clarke to influence him in the granting of commissions in the army. A national scandal arose when Clarke testified before the House of Commons that she had sold army commissions with Frederick’s knowledge. The scandal was the subject of much humor and mockery, especially by caricaturists such as Isaac Cruikshank who created cartoons making fun of the scandal. Isaac Cruikshank’s cartoon below shows Mary Anne Clarke, wearing the Duke of York’s military cloak, extending it to cover a crowd of miniature soldiers, civilians, and clergymen clustering around her with outstretched arms. Gwyllym Wardle is standing to the right side, gazing at her and declaring his fascination. Frederick was acquitted of any implications, but ten days after the cartoon’s publication, he resigned as Commander-in-Chief of the British Army. Two years later, it was revealed that Clarke had received payment from Frederick’s chief accuser, Gwyllym Wardle. Frederick’s brother George, who had become Prince Regent in 1811 when his father was deemed unfit to reign, reappointed Frederick as Commander-in-Chief on May 29, 1811. Frederick held the position until his death and thereafter exercised strict impartiality with officer commissions and promotions.

“The modern Circe or a sequel to the petticoat” by Isaac Cruikshank, March 15, 1809; Credit – Wikipedia

In 1817, there was a succession crisis. King George III was still living but not reigning due to his mental incapacity. Eleven of the king’s fifteen children were living, but only four of them had married and only one had managed to produce a legitimate grandchild: Princess Charlotte of Wales, the daughter of George, Prince of Wales. On November 6, 1817, a great tragedy struck the British Royal Family. Twenty-one-year-old Princess Charlotte died after delivering a stillborn son. Frederick was now second in line to the throne. Unless his brother George had another child, Frederick would be the heir presumptive upon the death of King George III. Frederick’s unmarried brothers rushed to find brides, but any children born to them would be behind Frederick in the line of succession.

In 1819, Frederick was entrusted with the care of King George III, blind, deaf, and in a state of dementia, living at Windsor Castle. Under the care of Frederick, King George III lived on until January 29, 1820, six days after the death of his fourth son, Edward, Duke of Kent, the father of the infant Princess Victoria. Frederick’s brother succeeded as King George IV and Frederick became heir presumptive to the throne. Frederica, Frederick’s wife, died on August 6, 1820, and requested to be buried at her Weybridge church.

During January 1827, Frederick was staying at Rutland House, Arlington Street in London, England, the home of his friend, John Manners, 5th Duke of Rutland, while his home was being redecorated. It was there that Frederick, Duke of York died on January 5, 1827, at the age of 63. He was buried in the Royal Vault at St. George’s Chapel, Windsor Castle in Windsor, England.