You have reached the cached page for https://carmensandiego.fandom.com/wiki/Finn_Wolfhard
Below is a snapshot of the Web page as it appeared on 4/14/2021 (the last time our crawler visited it). This is the version of the page that was used for ranking your search results. The page may have changed since we last cached it. To see what might have changed (without the highlights), go to the current page.
You searched for: +Finn Wolfhard We have highlighted matching words that appear in the page below.
Bing is not responsible for the content of this page.
Finn Wolfhard | Carmen Sandiego Wiki | Fandom

Finn Wolfhard is a Canadian actor. He voiced Player in the 2019 Netflix animated series Carmen Sandiego.

At 16, the young actor from Vancouver,British Columbia, Canada has already made a name for himself. He plays Mike Wheeler in the Netflix series Stranger Things. He played Richie "Trashmouth" Tozier in the 2017 film adaptation of Stephen King's It. He is the lead vocalist and guitarist for the rock band Calpurnia. 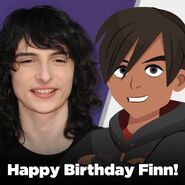 Retrieved from "https://carmensandiego.fandom.com/wiki/Finn_Wolfhard?oldid=36262"
Community content is available under CC-BY-SA unless otherwise noted.