Ernest the Iron (German: Ernst der Eiserne; 1377 – June 10, 1424) was Duke of Styria, Carinthia and Carniola (collectively Inner Austria) from 1406 until his death. He was a member of the Habsburg dynasty, of the Leopoldian line, whose head of the family he was from 1411 to 1424.

Ernest was born in Bruck an der Mur, Styria, the third son of Leopold III, Duke of Inner Austria. After the death of his father in the Battle of Sempach in 1386, he stood under the guardianship of Albert III. In 1401 he accompanied the German King Rupert on his campaign in Italy. Upon the death of their eldest brother William, Duke of Inner Austria in 1406, the remaining three brothers agreed about the future partition of their patrimony. In the separation agreement of 1406, Ernest received Styria, Carinthia and Carniola, and jointly with his elder brother duke Leopold IV (the head of the Leopoldian line), held the guardianship over young Albert V, Duke of Austria. In 1407, conflicts between Leopold and Ernest resulted in a civil war that lasted until May 1409. When Leopold died without a male heir in 1411, Ernest became the uncontested head of the Leopoldian family. In 1414, he became the last Duke to be enthroned according to the traditional rite in Carinthia, and from that time on called himself Archduke. He was the first Habsburg to actually use this title, which had been invented by Rudolf IV. 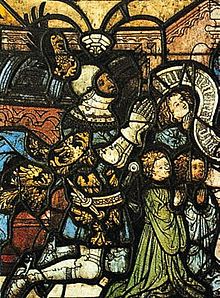 Ernest the Iron with his sons.

He was made a member of the Order of the Dragon, but later became bitter with Emperor Sigismund from 1412 onwards when his brother Frederick IV, Duke of Further Austria (ruler of Tirol) was banned by the Emperor in 1417, Ernest first attempted to gain control over Frederick's territories himself, but then came to an agreement with him and successfully defended Tirol against the Emperor's pretensions.

Ernest died at Bruck an der Mur, and was buried in the Cistercian monastery of Rein. His nickname the Iron only came into use after his death.

On 14 January 1392, Ernest married his first wife Margaret of Pomerania. She was a daughter of Bogusław V, Duke of Pomerania and his second wife Adelheid of Brunswick-Grubenhagen. They had no children. She died in 1407 or 1410 according to contradictory necrologies.

On 25 January 1412, Ernest married his second wife Cymburgis of Masovia, who was his equal in vitality and with whom he had nine children:

As the ruler of Inner Austria and the founder of the older Styrian Line of the Habsburg family, which, by his son, Emperor Frederick III survived the Albertinian-Austrian and the Tyrolean Lines, he became the ancestor of all later Habsburg emperors.

All translations of Ernest, Duke of Austria