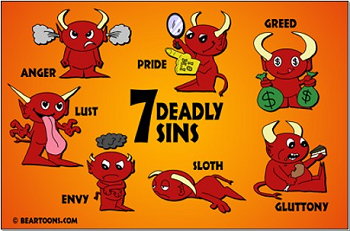 Used with permission.
The Operative: Do you know what your sin is, Mal?
Mal: Aw hell, I'm a fan of all seven. [headbutt] But right now, I'm gonna have to go with wrath.
— Serenity
Advertisement:

The Seven Deadly Sins is a classic interpretation of seven basic concepts that will lead your soul to ruin. Originally they were termed the seven deadly vices (which are the opposite of "virtues"… Ah-ha, Theme Naming!).

In alphabetical order, here are the big seven, along with a few examples of tropes embodying each (keep in mind that there are plenty of tropes that reference them, but including them all would make this entry nigh-unreadable):

Orthodox Christianity, interestingly, adds an eighth sin: Despair. In theology this sin refers mostly to thinking you're too wretched to go to heaven, so sort of the opposite extreme of Pride. You often hear people talking about "succumbing to the eighth deadly sin" in old Russian novels as a result. (Catholicism, for the record, folds Despair into Sloth, on the grounds that someone who has given in to despair is no longer working to improve their situation and has instead decided to "let nature take its course.")

Technically, in its original form when created by Evagrius Ponticus, there were eight Deadly Sins, including Despair, yet it did not have Envy (Despair took that role) nor Lust (Prostitution took that role somewhat explaining why Lust is often embodied by beautiful women). Instead, it had Vainglory/Deceitful Boasting as the eighth, separate from Pride. The three worst sins are Wrath (3rd), Envy (2nd) and Pride (1st) according to Purgatorio of The Divine Comedy, due to their nature as perverted love aimed at harming others.

Remember them with the handy acronym WASPLEG!note Wrath, Avarice, Sloth, Pride, Lust, Envy, Gluttony, or you can relabel "Wrath" as "Anger" and "Avarice" as "Greed" to get "PAGGLES". Alternatively, to sound more mysterious and intellectual, use the Latin names for the sinsnote Superbia (Pride), Avaritia (Avarice), Luxuria (Lust), Invidia (Envy), Gula (Gluttony), Ira (Wrath), Acedia (Sloth)., which can be arranged to form another handy acronym: SALIGIA (roughly, "salt").

Subtrope of Virtue/Vice Codification. For the good counterpart, see the Seven Heavenly Virtues. Compare the Scale of Scientific Sins. See also Mr. Vice Guy, Embodiment of Vice and Evil Virtues. No relation to the Seven Dirty Words, except maybe that people are likely to use them wrathfully. Nor to the Eight Deadly Words, even if they're meant to combine the apathy and despair of the audience. Nor to the manga and anime series The Seven Deadly Sins and Seven Mortal Sins.

Leave it to the Simpsons to give their own spin on the Seven Deadly Sins.

Leave it to the Simpsons to give their own spin on the Seven Deadly Sins.