You have reached the cached page for http://www.unofficialroyalty.com/elisabeth-of-bavaria-empress-of-austria/
Below is a snapshot of the Web page as it appeared on 10/23/2020 (the last time our crawler visited it). This is the version of the page that was used for ranking your search results. The page may have changed since we last cached it. To see what might have changed (without the highlights), go to the current page.
You searched for: +Elisabeth of Bavaria We have highlighted matching words that appear in the page below.
Bing is not responsible for the content of this page.
Elisabeth of Bavaria, Empress of Austria | Unofficial Royalty

Elisabeth Amalie Eugenie, Duchess in Bavaria, known as Sisi, was born on December 24, 1837 at Herzog-Max-Palais (Duke Max Palace) in Munich, Kingdom of Bavaria, now in Bavaria, Germany. Today the palace is the Munich headquarters of the Deutsche Bundesbank, formerly the State Central Bank of Bavaria, and there is a plaque on the building commemorating Sisi’s birth.

Plaque on the Deutsche Bundesbank in Munich commemorating the birth of Elisabeth, Empress of Austria; Photo Credit – Susan Flantzer, August 2012

Sisi’s father was Maximilian Joseph, Duke in Bavaria, from a junior branch of the House of Wittelsbach.  Maximilian Joseph did much to promote Bavarian folk music. He played the zither, which is the national instrument of Bavaria, and composed music for it.

Sisi’s mother was Princess Ludovika of Bavaria, the daughter of Maximilian I Joseph, King of Bavaria and his second wife Caroline of Baden. 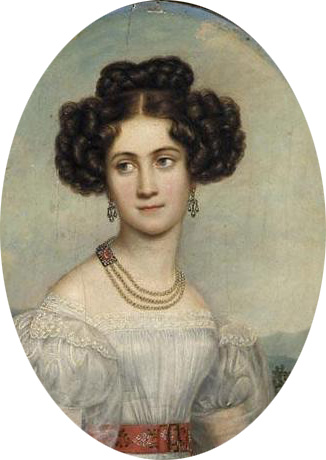 Although the family had a home in Munich, Herzog-Max-Palais (Duke Max Palace), Sisi’s parents had no obligations with the Bavarian royal court and their nine children spent much time living a carefree, unstructured, unrestrained childhood at Schloss Possenhofen on Lake Starnberg.  Sisi had a close relationship with her father, and he allowed her to stay away from classes to spend time with him. Her hobbies included horseback riding, drawing, and writing poems. 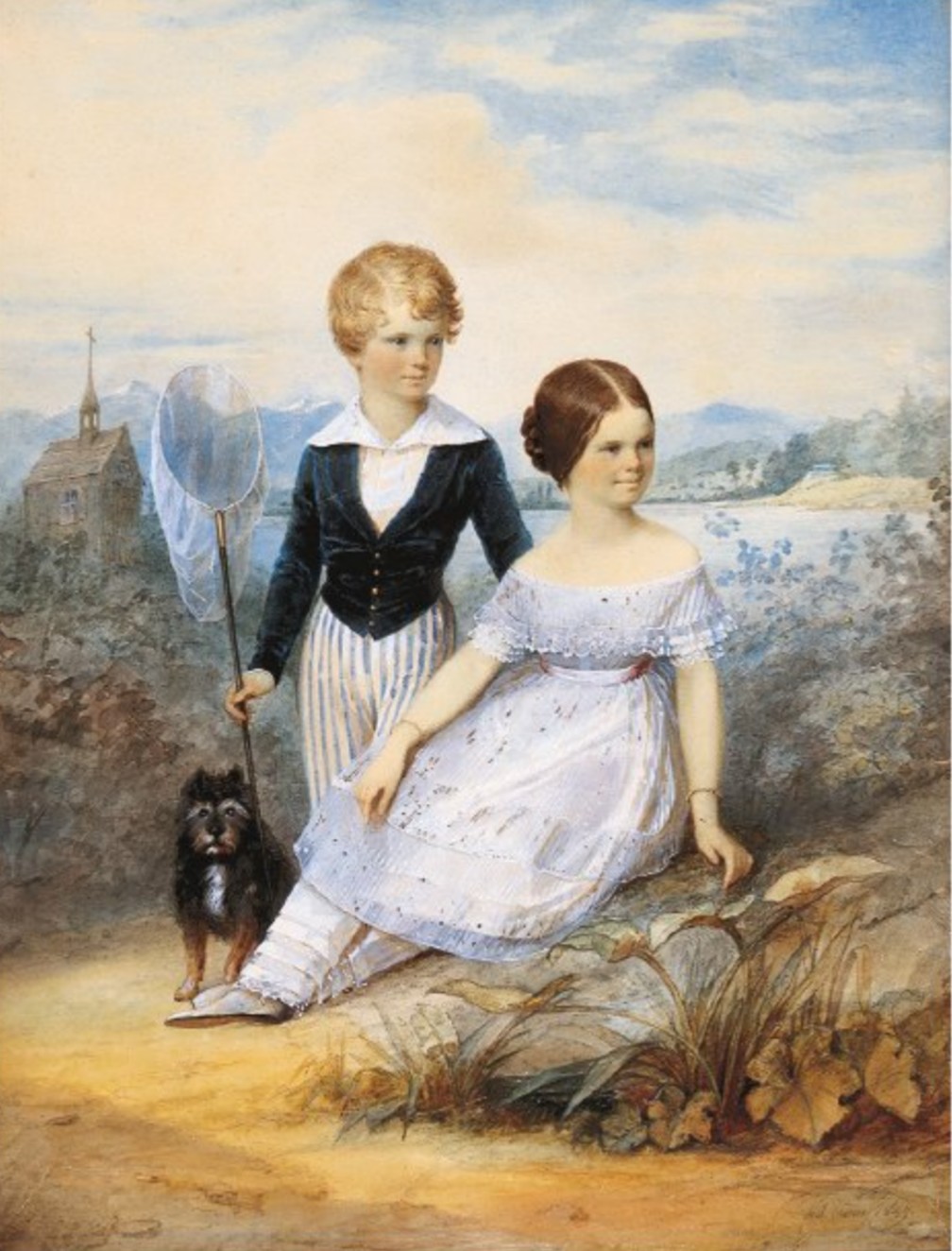 In 1848, Emperor Ferdinand of Austria abdicated and his 18-year-old nephew Franz Joseph succeeded him. The feeling in the Imperial Court was that the young emperor should marry and produce heirs as soon as possible. Franz Joseph’s domineering mother, Princess Sophie of Bavaria was the sister of Sisi’s mother. Sophie considered several princesses as the future empress, however, Sophie wanted to forge a relationship with her familial House of Wittelsbach of Bavaria and the House of Habsburg-Lorraine. She arranged for a match between Franz Joseph and Helene, Duchess in Bavaria, Sisi’s eldest sister. In 1853, Helene traveled with her mother and her younger sister Sisi to the resort of Bad Ischl, Upper Austria to meet her first cousin Franz Joseph with the hopes that she would become his bride. Instead, Franz Joseph fell in love with the 15-year-old Sisi. Franz Joseph told his mother that if he could not marry Sisi, he would not marry at all. Five days later their engagement was officially announced. 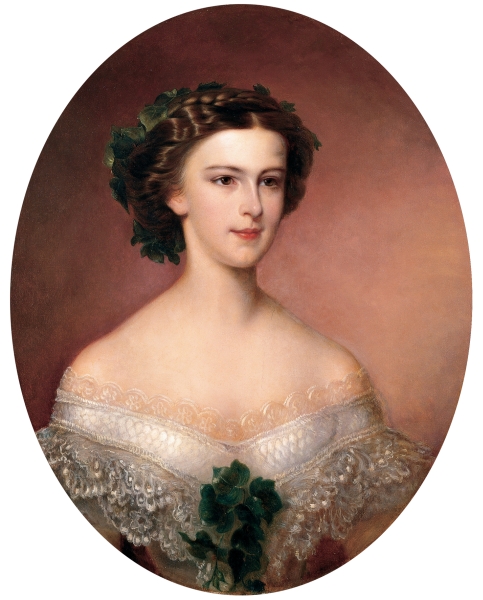 Franz Joseph and Sisi were married at 4 PM on April 24, 1854, at the Augustinerkirche, the parish church of the Imperial Court of the Habsburgs, a short walk from Hofburg Palace in Vienna, Austria. It had taken an hour for the wedding procession to walk through the palace corridors and courtyards and down the street to the church. The ceremony was conducted by Cardinal Joseph Othmar Rauscher, Archbishop of Vienna with 1,000 guests in attendance including 70 bishops.

Sisi, who had been brought up in a relaxed atmosphere, was bored and tired after the wedding, but her duties were not yet done. After the wedding, the newlyweds proceeded down a 50-yard carpet back to the Hofburg Palace where for two hours they received their wedding guests. When dinner was finally served at 10 PM, Sisi had no appetite. The strict and formal reality of the Habsburg court’s protocol had astonished her. When her family left Vienna to return to Bavaria, Sisi’s father told her that he could not tolerate the Vienna court etiquette and that she would have to visit him at Schloss Possenhofen. Her sister Helene expressed her relief that Franz Joseph had not chosen her as his bride.

The couple had four children:

Sisi with her two eldest surviving children, Gisela and Rudolf in 1858; Credit – Wikipedia

The marriage was not a happy one for Sisi. Although her husband loved her, Sisi had difficulties adjusting to the Austrian court and did not get along with Imperial family members, especially her mother-in-law. Sisi felt emotionally distant from her husband and fled from him as well as her duties of at court, by frequent traveling.  In 1885, Franz Joseph began a long-standing private relationship with actress Katharina Schratt that would last the rest of his life. The exact nature of their relationship is unclear. Some believe that Katharina and Franz Joseph were lovers while others believe that their relationship was platonic. Katharina always maintained the strictest discretion regarding her relationship with Franz Joseph. Sisi tolerated the relationship and even seemed to encourage it. 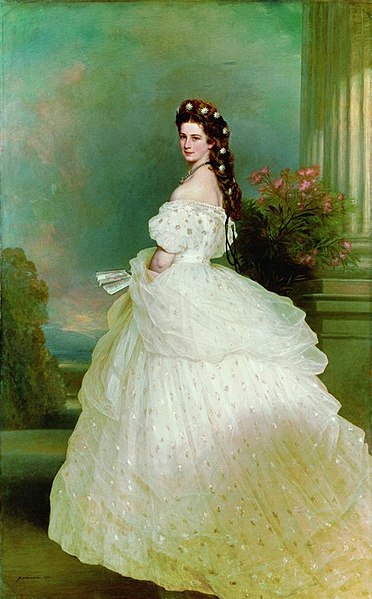 In 1860, Sisi suffered from severe coughing. The diagnosis of lung disease and the recommendation of a cure in Madeira, Portugal was used by Sisi as a pretext to escape from court life and take her first trip alone away from Vienna. When Sisi returned to Vienna, she suffered a severe relapse. The doctors diagnosed pulmonary consumption and Sisi escaped to the Greek island of Corfu in the Ionian Sea. Sisi quite liked Corfu and in 1889-1891, she had the Achilleion Palace built there. Sisi’s travels to escape life at court continued for the rest of her life.

Sisi had very rigorous exercise habits. Besides riding every day for hours, she had a gymnasium with wall bars, a high bar, and rings in the frame of a door. When she was in her 40s, Sisi began to suffer from sciatica and could not ride anymore. She then increased her gymnastic routines and began fencing lessons. In addition, she took long walks, sometimes walking 20 miles a day.

Franz Joseph kept his heir Crown Prince Rudolf away from all state affairs. Under pressure from his father, Rudolf married Princess Stephanie of Belgium, daughter of King Leopold II of the Belgians. The couple had one child, Elisabeth Marie. On January 30, 1889, at Mayerling, a hunting lodge in the Vienna Woods which Rudolf had purchased, in an apparent suicide plot, Rudolf shot his 17-year-old mistress Baroness Mary Vetsera and then shot himself. Crown Prince Rudolf had no sons, so the succession would pass to Emperor Franz Joseph’s brother, Archduke Karl Ludwig and his eldest son, Archduke Franz Ferdinand. In a matter of days, Archduke Karl Ludwig renounced his succession rights in favor of his son Archduke Franz Ferdinand, whose assassination in 1914 sparked World War I.

After Rudolf’s death, Sisi spent little time with her husband, preferring to travel. However, a warm and friendly correspondence between the couple existed. In 1898, despite being warned about possible assassination attempts, Sisi traveled incognito to Geneva, Switzerland. She stayed at the Hotel Beau-Rivage, where she enjoyed a meal of timbale de volaille, crème glacèe à l’Hongroise, and iced champagne. She asked her lady-in-waiting Irma, Countess Sztáray to send the menu to Franz Joseph because she had enjoyed the meal so much. Afterward, Sisi visited the aviaries, aquarium, and conservatories, and bought presents for her grandchildren.

Last photograph of Sisi and her lady-in-waiting the day before her death; Credit – Wikipedia

The next day, September 10, 1898, Sisi was due to take a ferry across Lake Geneva to the town of Territet. As Sisi and her lady-in-waiting were walking to the ferry’s landing, the Italian anarchist Luigi Lucheni rushed at her and stabbed her in the heart with a pointed file. The puncture wound was so small that it was initially not noticed and it was thought that Sisi had just been punched in the chest. Sisi thanked all the people who had rushed to help and conversed with her lady-in-waiting about the incident. Only when onboard the ferry did she finally collapse and then the severity of her wound came to light. The ferry captain ordered the ferry back to Geneva and Sisi was taken back to the hotel on an improvised stretcher. A doctor and a priest were summoned. The doctor confirmed that there was no hope and the priest administered the Last Rites. Sisi died without regaining consciousness.

File that was used to stab Sisi on display at the Hofburg Palace; Credit – http://www.hofburg-wien.at 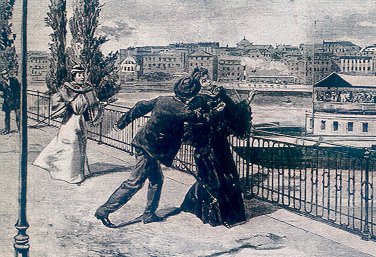 An artist’s rendition of the stabbing of Sisi by the Italian anarchist Luigi Lucheni; Credit – Wikipedia

Luigi Lucheni originally wanted to assassinate Prince Philippe, Duke of Orléans, but the duke had left Geneva earlier. He then selected Sisi as his victim when a Geneva newspaper revealed that the woman traveling under the pseudonym of “Countess of Hohenembs” was Empress Elisabeth of Austria.  Lucheni was sentenced to life imprisonment, and in 1910 he hanged himself with his belt in his prison cell.

Franz Joseph never fully recovered from his wife’s death. Sisi was buried in Franz Josephs Gruft (Franz Joseph’s Crypt) in the Imperial Crypt in Vienna, Austria where her son Rudolf had been buried. When Franz Joseph died in 1916, his tomb was placed between the tombs of his wife and son. 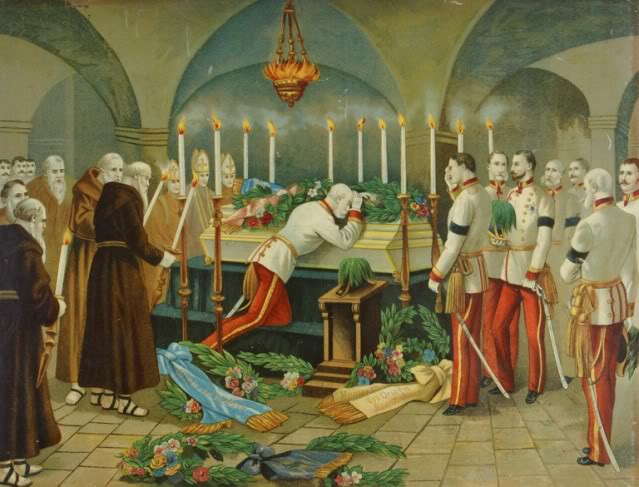 Emperor Franz Joseph at Sisi’s coffin in the Imperial Crypt 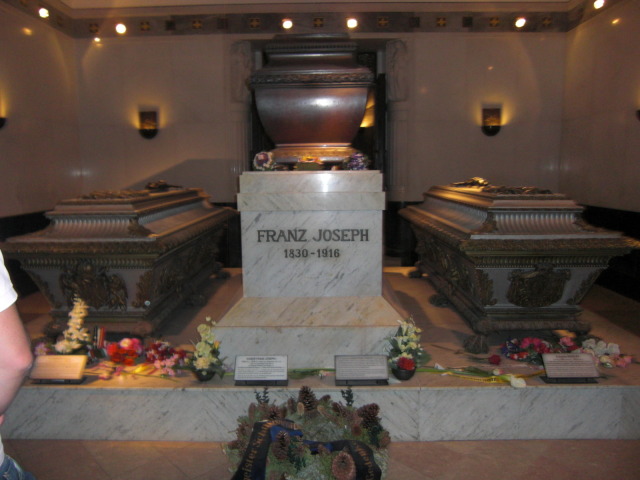