When it comes to the British royal family, some members are more visible than others. For example, everyone knows the late Queen Elizabeth, King Charles, and younger royals like Prince Harry and Prince William. But some might be surprised to learn that the Queen and Prince Philip actually had four children: King Charles, Princess Anne, Prince Andrew, and Prince Edward. All four of them walked behind their mother's coffin as it made its way from Buckingham Palace to Westminster Hall, where she will lie in state until the funeral on Monday, September 19. 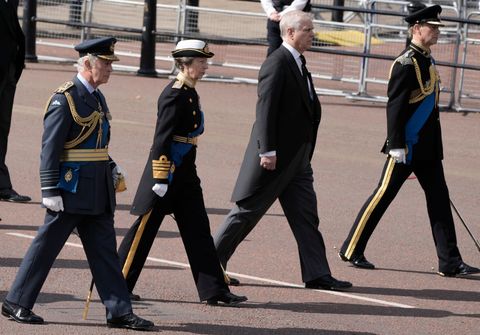 All four of the Queen’s children walking side by side behind her casket.
WPA Pool//Getty Images

Here's everything you need to know about the Queen's son, Prince Edward, Earl of Wessex.

Prince Edward was born on March 10, 1964. At the time of his birth, he was third in line to the throne, behind his two older brothers, Prince Charles and Prince Andrew, but before his older sister Princess Anne. Now, following the Queen's death, he's 14th in the order of succession. Upon news that the Queen was not in good health, he and his wife Sophie immediately traveled to Balmoral to be by her side.

Edward currently holds the titles of Earl of Wessex and Earl of Forfar, in addition to Prince.

Upon marriage, royal princes often receive a dukedom from the monarch; however, on Edward's wedding day, he was given the title of Earl of Wessex. He will reportedly take on his father's title of Duke of Edinburgh, perhaps when Prince Charles becomes King.

In March of 2018, he was also given the title of Earl of Forfar to use in Scotland, as a birthday gift from his mother.

Edward is the only one of his siblings who has not divorced. He married Sophie Rhys-Jones back in June of 1999 in a relatively private ceremony (by royal standards) in St. George's Chapel at Windsor Castle, and in June of 2019, the couple celebrated their 20th wedding anniversary. The happy couple have two children together, Lady Louise Windsor, and James, Viscount Severn.

After a stint in the marines and an attempt at a television production career, Edward began to take over many of the responsibilities and engagements of his late father, Prince Philip, who retired from public duties in 2017. He is particularly involved in work for the Duke of Edinburgh's Award, which Philip founded in 1956 to help young people develop life and work skills, as well as the youth-focused The Earl and Countess of Wessex Trust. He has been the Chairman of the Trustees of The Duke of Edinburgh’s International Award Foundation since 2015.

Both he and his wife were rumored to be favorites of the Queen.

They are only rumors, to be certain, but the couple had a special relationship with the Queen.

"[Countess Sophie] is trusted and relied on by the Queen in a way I couldn't say applied to the Duchess of Cambridge or the Duchess of Cornwall," a royal aide told the Daily Mail. "She is like another daughter to Her Majesty, they are that close."

Similarly, a royal insider told Express: "Edward has moulded into a quiet and efficient figure who does not seek attention or acquire headlines. He and Sophie are liked for being dutiful and uncomplaining."

(It should also be noted that there is speculation that Prince Andrew was the Queen's favorite, and Princess Anne was favored by her father, so who knows?)

As the digital director for Town & Country, Caroline Hallemann covers culture, entertainment, and a range of other subjects

There's a New Royal Baby on the Way in Luxembourg

Debate Over a Queen Elizabeth Memorial

The Queen's Maid of Honor Died Days After Her

Meghan Markle's Podcast Is on Hold