You have reached the cached page for https://griffinrampant.wordpress.com/2020/03/27/arms-of-eberstalzell-austria/
Below is a snapshot of the Web page as it appeared on 6/2/2020 (the last time our crawler visited it). This is the version of the page that was used for ranking your search results. The page may have changed since we last cached it. To see what might have changed (without the highlights), go to the current page.
You searched for: +Duke of Bavaria We have highlighted matching words that appear in the page below.
Bing is not responsible for the content of this page.
Arms of Eberstalzell, Austria | European Heraldry 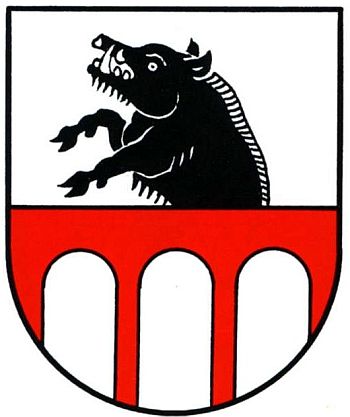 Blazon: Argent a bridge of three arches in base gules, issuant therefrom a demi-boar rampant sable

The boar (Eber) does double duty here as both a canting element and a symbol of the town’s connection with Kremsmünster Abbey. The abbey was founded in 777 by Tassilo III, Duke of Bavaria, on the site where his son Gunther had been killed by a wild boar. (The last part is legend, but does help explain the abbey’s use of a boar as a heraldic symbol). Eberstalzell was one of a few towns the duke donated to the new abbey. The bridge doesn’t have quite the same long pedigree; it’s a representation of the local autobahn bridge, which is built of stone.