You have reached the cached page for https://www.britannica.com/biography/Henry-III-duke-of-Bavaria-and-Saxony
Below is a snapshot of the Web page as it appeared on 4/5/2020 (the last time our crawler visited it). This is the version of the page that was used for ranking your search results. The page may have changed since we last cached it. To see what might have changed (without the highlights), go to the current page.
You searched for: +Duke of Bavaria We have highlighted matching words that appear in the page below.
Bing is not responsible for the content of this page.
Henry III | duke of Bavaria and Saxony | Britannica
Henry III
duke of Bavaria and Saxony
Media
Print
Please select which sections you would like to print:
Thank you for your feedback

Henry the Lion was the only son of Henry the Proud, duke of Saxony and Bavaria, and Gertrude, the daughter of the Holy Roman emperor Lothar III. In May 1142 he recovered Saxony, one of the two duchies of which his father had been divested by Conrad III, the first Hohenstaufen German king. In 1147 Henry laid claim to Bavaria, which Conrad III had granted to Henry II Jasomirgott, margrave of Austria, and in 1151 he tried in vain to take possession of the duchy. In 1147 or 1148 he married Clementia, the daughter of Conrad, duke of Zähringen, but this marriage was dissolved in 1162.

When Frederick I Barbarossa of Hohenstaufen, his cousin, was elected king of Germany in 1152, the Hohenstaufen made peace with the rival dynasty of the Welfs, of which Henry was a member. In 1154 Frederick granted Henry the right to invest the bishops of the new bishoprics beyond the Elbe and also recognized his territorial claims to Bavaria. In September 1156 Henry secured possession of the Duchy of Bavaria; Austria was subsequently separated from Bavaria and was given to Henry Jasomirgott and elevated into its own duchy.

Henry, in turn, for 20 years supported Frederick Barbarossa. He accompanied him with a large army on his first Italian campaign (1154/55) and, after Frederick’s coronation as emperor, suppressed a rising of the Romans. In 1157 he took part in Frederick’s expedition against the Poles. During Frederick’s second Italian campaign, Henry provided valuable assistance to the Emperor at the siege of Crema in 1160 and in the war against the Milanese cities in 1161.

One year after recovering Bavaria, Henry laid the foundations of the city of Munich by establishing a new market on the Isar River. But his main effort was directed toward expanding the Duchy of Saxony, especially in the lands beyond the Elbe. In 1159 he refounded the city of Lübeck on territory he had taken from Adolf II, count of Holstein, who had first founded Lübeck in 1143. By treaties with the merchants of Gotland and the princes of Sweden and Novgorod, he considerably enhanced Lübeck’s position as a commercial centre. In 1160 the bishopric of Oldenburg was also transferred to that city. From 1158 on Henry had subdued the Slavic Obodrites in several expeditions, extending his power all over Mecklenburg and thus opening the way for its Christianization and colonization.

In 1160 Schwerin became the seat of the bishopric of Mecklenburg and was granted the privileges of a city. Even the princes of western Pomerania temporarily acknowledged Henry’s feudal sovereignty. When Valdemar I, king of Denmark, conquered the island of Rügen, in the Baltic Sea, a long, drawn-out struggle broke out between him and Henry that lasted until 1171, when the dispute was settled and Henry’s daughter married Valdemar’s son.

In those years Henry also consolidated his position in Saxony by seizing the properties of several extinct dynasties without regard to the hereditary claims of other families. He made Brunswick his capital, and, in front of the castle he had built, he erected the statue of a lion as a symbol of his family and a sign of his sovereignty. But Henry’s arrogant nature and his propensity for aggrandizement evoked growing opposition. Beginning in the middle 1150s, several Saxon princes entered into alliances against him. Ten years later, a great coalition led by Albert I the Bear, margrave of Brandenburg, and the Archbishop of Cologne posed a serious threat to him. It was only after the Emperor intervened in 1168 that peace was restored in Saxony.

At that time, Henry was at the zenith of his power. In early 1168 he married Matilda, the daughter of Henry II of England, and soon afterward was sent to France and England as ambassador of Frederick I on a mission to arrange an armistice between both nations. In 1172 he went on a pilgrimage to Jerusalem with a large following and was received with great ceremony by the Byzantine emperor Manuel I Comnenus at Constantinople (now Istanbul).

When in 1176 Frederick Barbarossa asked for support against the Lombard cities in northern Italy, Henry’s price for aiding the Emperor was the important imperial city of Goslar, together with its silver mines. But Frederick refused to cede it, and his old alliance with Henry came to an end.

When fighting broke out again in Saxony in 1177, Frederick, after his return to Germany in 1178, instituted proceedings based on the charge of the Saxon nobles against Henry for breach of the king’s peace. Henry, who had refused to answer the charges in the king’s court, was deprived of his two duchies and of all imperial fiefs, in 1180. The Emperor then proceeded to break up Henry’s former domain. In the same year the Saxon duchy was divided into two parts. The lands of the two bishoprics of Cologne and Paderborn were given to the Archbishop of Cologne as the new Duchy of Westphalia; the eastern part of Saxony was given as a fief to a son of Albert the Bear of Brandenburg. The Duchy of Bavaria was granted to an ally of Frederick’s, Otto von Wittelsbach.

Henry was at first able to maintain his position against Barbarossa in northern Saxony, but in the summer of 1181 he had to submit. Allowed to retain his hereditary lands of Brunswick and Lüneburg, he was exiled for several years to the court of his father-in-law, Henry II of England. On his return in 1185 he tried to regain his influence in Saxony. For his refusal to participate in the Third Crusade or to renounce his claims to Saxony, he was again banished, in 1189, rejoining Henry II in Normandy.

After Frederick Barbarossa’s death in 1190, Henry returned once more to Saxony. King Henry VI of Germany now took the field against him but made peace with him at Fulda in July 1190. After Henry the Lion renewed the fighting during Henry VI’s campaign in Italy, the Emperor and Henry became reconciled at a meeting in 1194. The following year Henry the Lion died in Brunswick; he was buried in the cathedral he had built there, at the side of his wife.

History at your fingertips
Thank you for subscribing!
Be on the lookout for your Britannica newsletter to get trusted stories delivered right to your inbox. 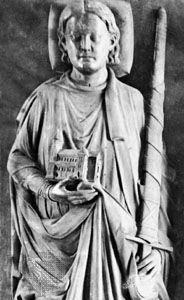