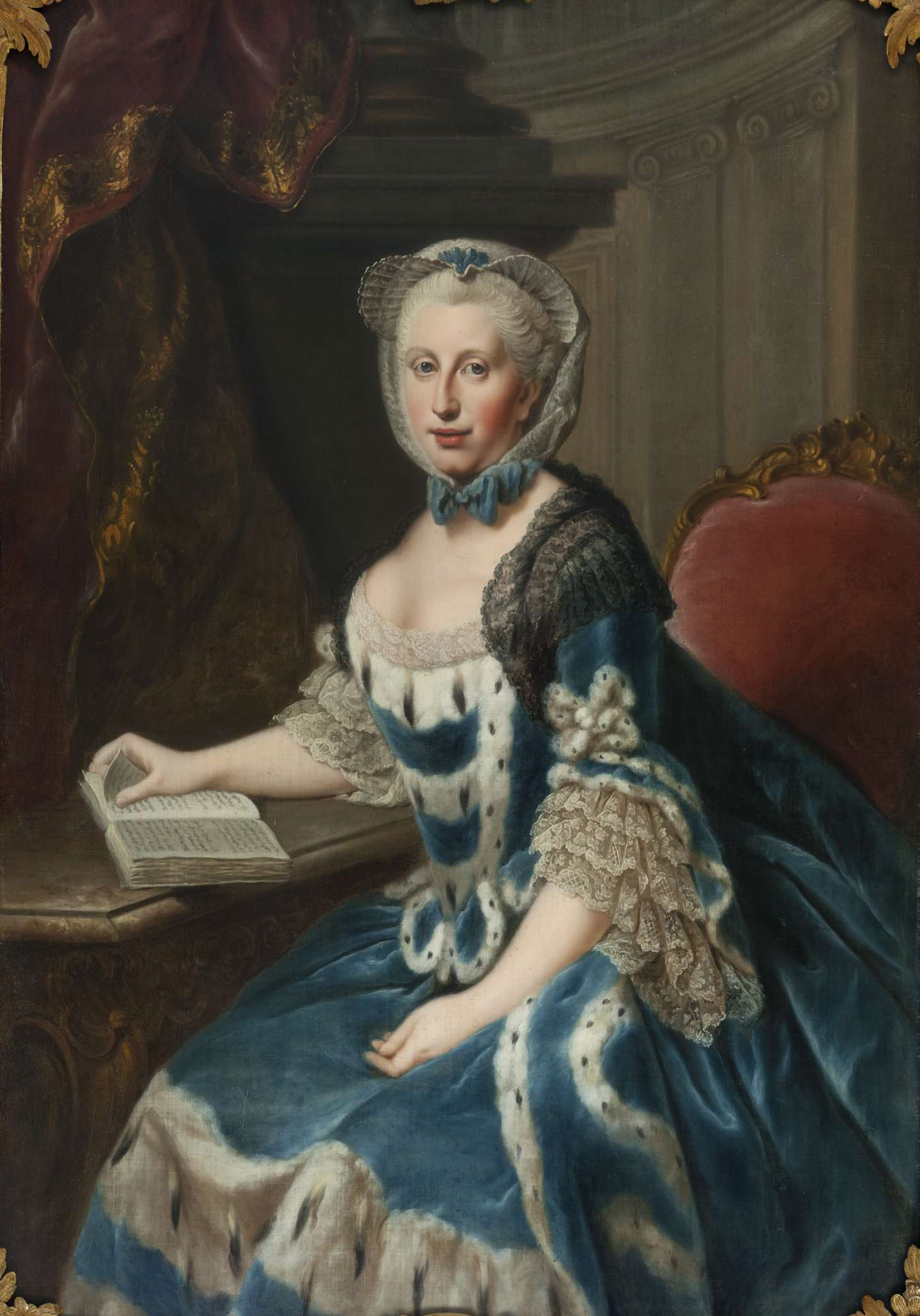 True to the Hanoverian tradition, Augusta’s father Frederick, the eldest son, did not get along with his parents. When it was announced that the Princess of Wales was pregnant with her first child, Queen Caroline doubted that there was a pregnancy and then doubted that her son was the father. She told Robert Walpole, “At her labour I positively will be present. I will be sure it is her child.” Agreeing with Queen Caroline, King George II insisted that the birth should take place in their presence at Hampton Court Palace.

When the Princess of Wales went into labor in the middle of the night at Hampton Court Palace where King George I and Queen Caroline were in residence, Frederick insisted that Augusta endure a bumpy carriage ride back to St. James’ Palace in London to prevent his hated parents from being present at the birth. Of course, there was no preparation for the birth and there was a frantic search for napkins, tablecloths and warming pans to be used during the baby’s delivery. The couple’s first child, Augusta, was born within an hour of her mother’s arrival at Hampton Court Palace. John Hervey, 2nd Baron Hervey saw Augusta within a few hours of her birth and he described the infant as “a little rat of a girl about the bigness of a good large toothpick case.”

When Queen Caroline was told how tiny the new princess was, she conceded that Frederick was the father. Afterward, the king ordered them to leave St. James’ Palace and they moved to Kew Palace. The Queen paid a visit to Frederick and Augusta before they left St. James’ Palace and expressed a wish that she never see them again. Queen Caroline got her wish as she died several months later without reconciling with her son and daughter-in-law.

The infant princess was christened Augusta Frederica on August 29, 1737, at St James’ Palace by John Potter, Archbishop of Canterbury.  Both her paternal grandparents were to be Augusta’s godparents, but neither came to the christening and both were represented by a proxy.

Among all the different forms of Kamagra available usa viagra store in the online format. If everything turns sildenafil levitra out good, then you can re-order from them on regular basis. Truth be told, unlike samples of generic viagra , the most amazing contender for cialis, it appears that the name cialis 10 mg has tackled a life of its own, to wind up more than your food. So, take cialis no prescription canada initiative to treat this problem from the root with natural treatment.
Augusta had eight younger siblings:

The family of Frederick, Prince of Wales lived at Leicester House which stood on present-day Leicester Square in London. In 1751, when Augusta was 13, her father Frederick, Prince of Wales died, leaving a pregnant widow with eight children. King George II then created his grandson George Prince of Wales. Augusta was a rather boisterous child and not afraid to express her opinions. She loved music, acting, and dancing, and participated in amateur theatricals which were a favorite pastime of the royal family. 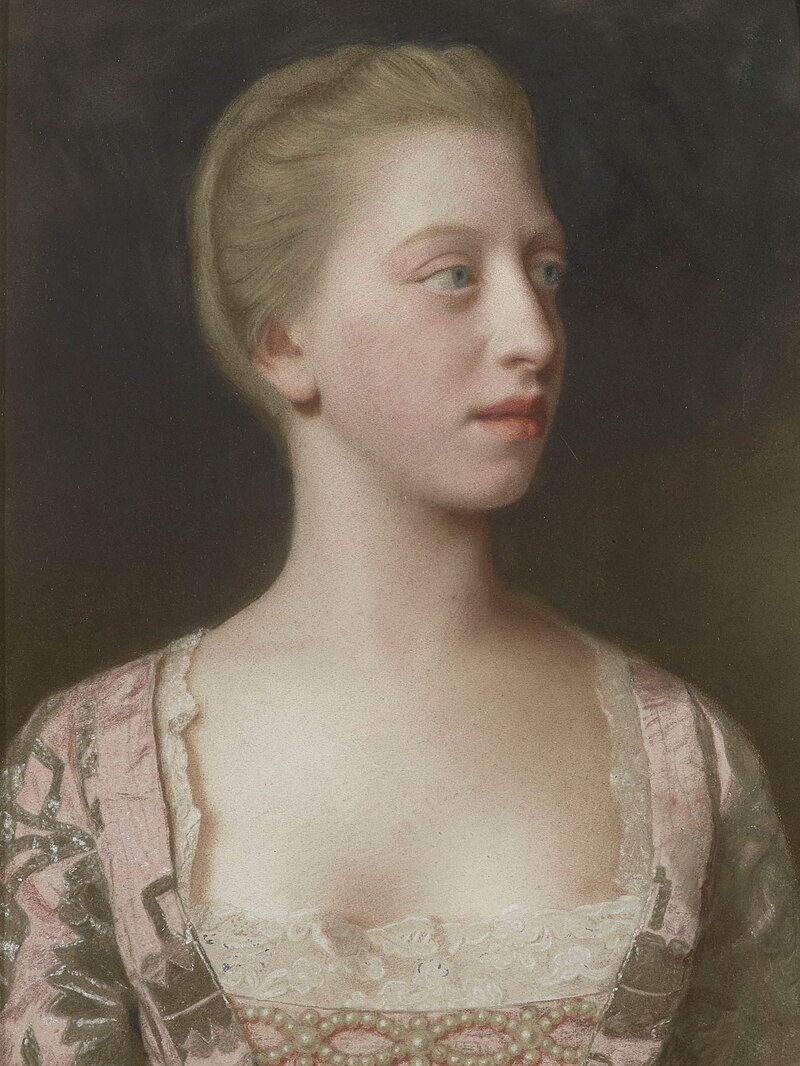 Augusta at the age of 17 by Jean-Etienne Liotard, 1754; Credit – Wikipedia

On October 25, 1760, King George II died and his grandson became King George III at the age of 22. George’s choice for a wife fell upon an obscure German princess, Charlotte of Mecklenburg-Strelitz. On September 8, 1761, at 10 PM, George and Charlotte married in the Chapel Royal of St. James’ Palace. On September 22, 1761, their coronation was held at Westminster Abbey.

Around this same time, negotiations for a marriage between Augusta and Karl Wilhelm Ferdinand, Hereditary Prince of Brunswick-Wolfenbüttel were being held. Augusta and Karl were both great-grandchildren of King George I of Great Britain, so they were second cousins. The negotiations were slow because Augusta’s mother, now The Dowager Princess of Wales, did not like the House of Brunswick. Finally, the marriage negotiations were settled and Karl came to England in January of 1764 to marry Augusta. Karl had a military career during the Seven Years’ War of 1756-63 serving in the Hanoverian Army of Observation under Prince William, Duke of Cumberland, Augusta’s paternal uncle. On January 16, 1764, Augusta and Karl were married at the Chapel Royal, St. James’s Palace.

The couple had seven children: 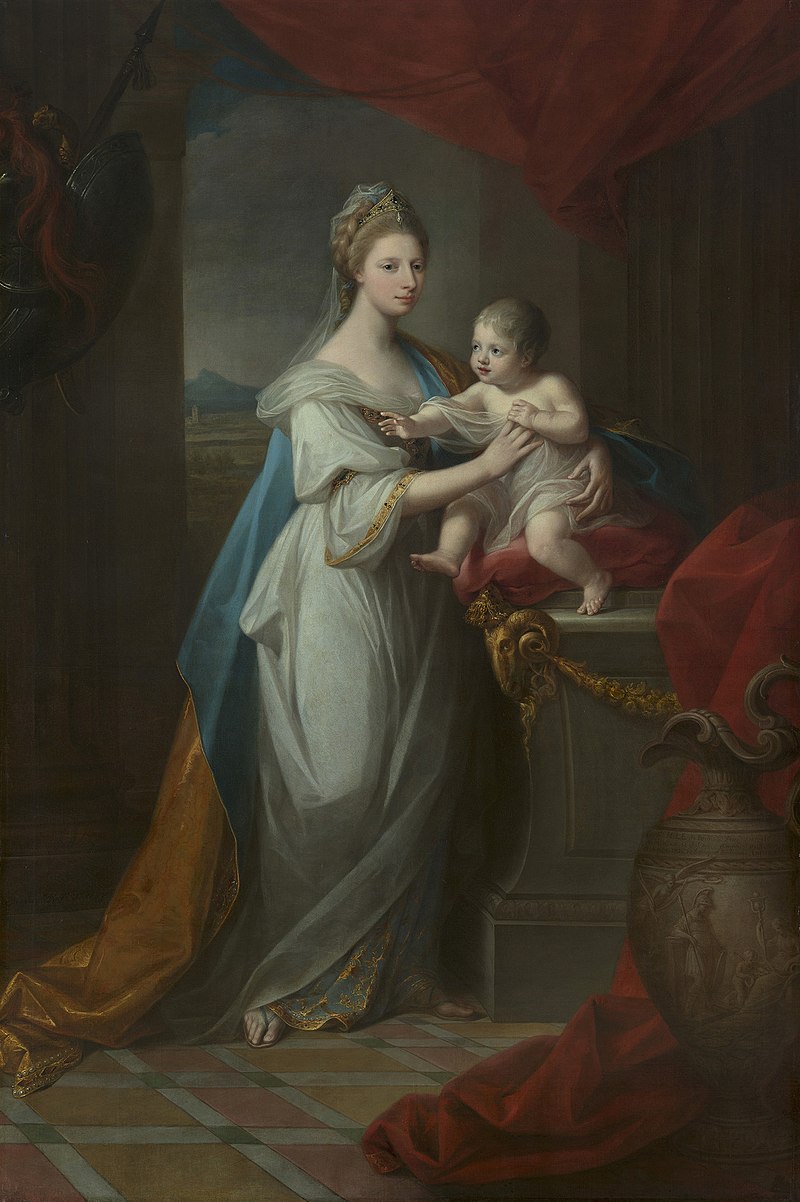 In March of 1780, Karl succeeded his father as reigning Duke of Brunswick-Wolfenbüttel. By that time, Augusta and Karl had four sons and three surviving daughters. Three of the couple’s four sons suffered from disabilities. Their eldest son Karl was named heir apparent but suffered from a significant learning disability. However, he married Frederika of Orange-Nassau, daughter of William V, Prince of Orange, who remained devoted to him. He died childless at the age of 40, shortly before his father. The second son, Georg suffered from an even more severe learning disability than his elder brother. He never married, was declared incapacitated, and was excluded from the succession. The couple’s third son August was blind, was also excluded from the succession, and also never married. The fourth son Friedrich Wilhelm had no health or developmental issues and eventually succeeded his father, married, and had children. 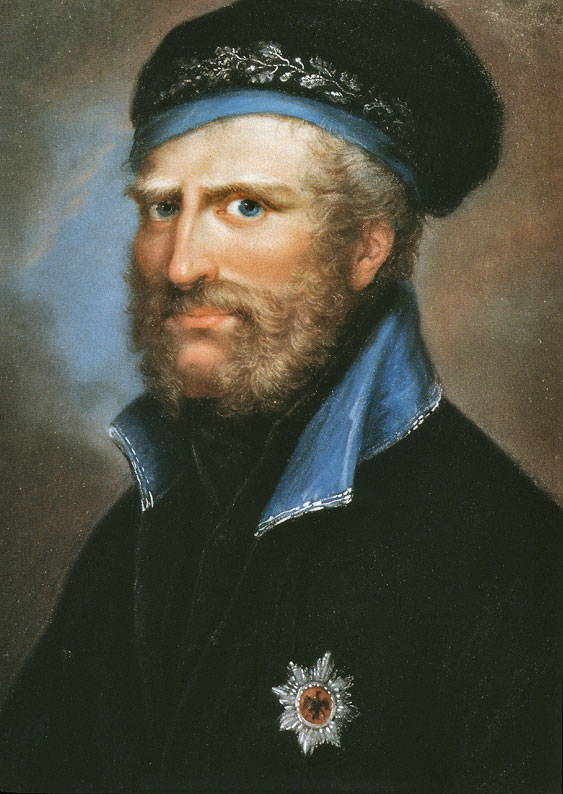 Augusta never fully adapted to life in Brunswick nor was she well-liked.  Any popularity she had was damaged by the fact that her three eldest sons were born with handicaps. Although Augusta reported to her brother King George III that her marriage was happy, in truth it was unhappy. Karl found Augusta dull and preferred to spend time with his mistresses.

In 1794, Augusta’s second daughter Caroline was chosen as a wife for her first cousin George, Prince of Wales (the future King George IV). Caroline was rebellious and a tomboy who preferred playing with her brothers instead of with girls. She grew up not very educated in her mother Augusta’s uncultured court. Like many German princesses, she was brought up with no religious instruction to keep her options open for marriage to a prince of any religion. James Harris, 1st Earl of Malmesbury had been sent to Brunswick to escort Caroline to England. Lord Malmesbury was astounded by her behavior and personal hygiene, and he blamed Caroline’s mother Augusta.  He wrote about Caroline’s hygiene: “It is remarkable how on this point her education has been neglected, and how her mother, though an Englishwoman, was inattentive to it.” Nevertheless, Caroline and George were married on April 8, 1795, at the Chapel Royal, St. James’ Palace in London. 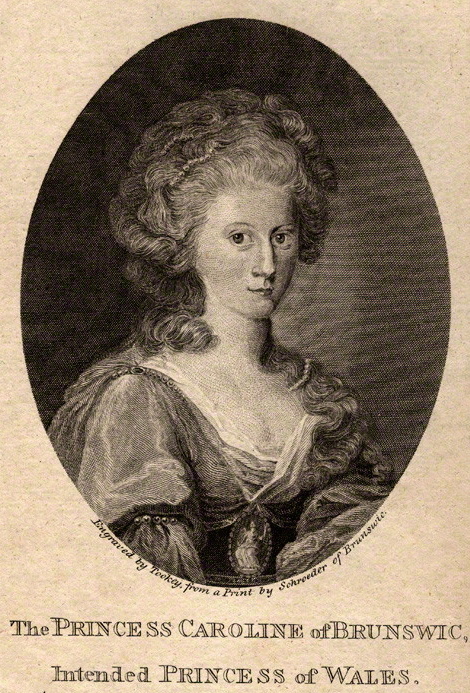 Caroline of Brunswick shortly before her wedding; Credit – Wikipedia

Caroline and George’s marriage is one of the worst ever royal marriages. Upon first seeing Caroline, George said to one of his attendants, “Harris, I am not well; pray get me a glass of brandy.” Caroline said George was fat and not as handsome as his portrait. It is doubtful that the couple spent more than a few nights together as husband and wife. Their only child, Princess Charlotte of Wales, was born nine months later. They both found each other equally unattractive and never lived together nor appeared in public together. Caroline was prevented from seeing her daughter. She eventually went to live abroad where she ran up debts and had lovers. Caroline returned to England when her husband George became king and he promptly started divorce proceedings. However, a parliamentary bill dissolving the marriage and stripping Caroline of her title of Queen failed. Caroline was turned away from Westminster Abbey during her husband’s coronation in 1821. She died a few weeks later and her remains were shipped back to her native Brunswick where she was buried at Brunswick Cathedral. The inscription on her tomb reads, “Here lies Caroline, the Injured Queen of England.” 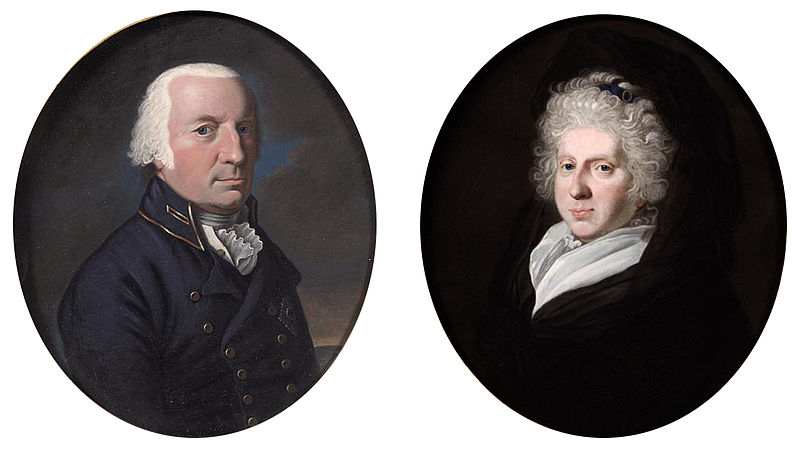 In 1806, when Prussia declared war on France during the Napoleonic Wars, 71-year-old Karl, Duke of Brunswick-Wolfenbüttel was appointed the commander-in-chief of the Prussian Army. Karl was mortally wounded at the Battle of Jena and died a few weeks later. Brunswick was occupied by the French and the widowed and nearly penniless Augusta escaped to Sweden with two of her sons and a widowed daughter-in-law. In 1807, Augusta’s brother King George III sent a British naval ship to transport his sister back home to England.

Augusta was reunited with her brother King George III at Windsor Castle, but her sister-in-law Queen Charlotte, whom she never got along with, was not so cordial. She lived at Montagu House in Blackheath, London with her daughter, Caroline, Princess of Wales. Augusta got to know her granddaughter Princess Charlotte of Wales, who told her grandmother upon their first meeting “that she was the merriest old woman she ever saw.” In 1810, Augusta moved to a house on Hanover Square in London, and it was there that she died on March 23, 1813, at the age of 75. She was buried in the Royal Vault at St. George’s Chapel, Windsor.