You have reached the cached page for https://www.yidio.com/movie/crossroads/30891
Below is a snapshot of the Web page as it appeared on 11/25/2020 (the last time our crawler visited it). This is the version of the page that was used for ranking your search results. The page may have changed since we last cached it. To see what might have changed (without the highlights), go to the current page.
You searched for: +Crossroads movie We have highlighted matching words that appear in the page below.
Bing is not responsible for the content of this page.
Watch Crossroads Online | 1986 Movie | Yidio

"Where second best never gets a second chance."
Add to Watchlist

Crossroads brings the acting talents of Ralph Macchio and Joe Seneca together to create a music-inspired comedy-drama. A young classical guitar player, Eugene Martone, dreams of playing the blues under the tutelage of Willie Brown, a legend of the blues genre. The pair make a life-changing journey back to the beginning of Willie's career. Along the way, they meet up with a feisty runaway named Frances, played by Jami Gertz, and the devil.

Eugene soon learns that his desire to play the blues is nothing compared with the desire to save his friend. Eugene's talent for the classical guitar becomes a crucial turning point in the movie.

Crossroads is an Drama, Music, Mystery, Romance movie that was released in 1986 and has a run time of 1 hr 36 min. It has received moderate reviews from critics and viewers, who have given it an IMDb score of 7.1 and a MetaScore of 55.

Crossroads is available to watch and stream, buy on demand at Amazon, Vudu, Google Play, Microsoft Movies & TV, iTunes, YouTube VOD online. Some platforms allow you to rent Crossroads for a limited time or purchase the movie and download it to your device. 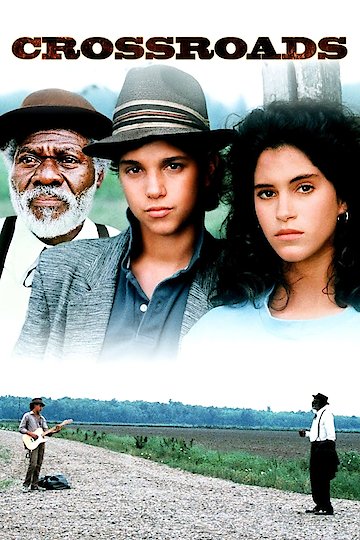