king of Great Britain and Ireland
verifiedCite
While every effort has been made to follow citation style rules, there may be some discrepancies. Please refer to the appropriate style manual or other sources if you have any questions.
Select Citation Style
Share
Share to social media
Facebook Twitter
URL
https://www.britannica.com/biography/Charles-II-king-of-Great-Britain-and-Ireland
Feedback
Thank you for your feedback

Join Britannica's Publishing Partner Program and our community of experts to gain a global audience for your work!
External Websites
Britannica Websites
Articles from Britannica Encyclopedias for elementary and high school students.
print Print
Please select which sections you would like to print:
verifiedCite
While every effort has been made to follow citation style rules, there may be some discrepancies. Please refer to the appropriate style manual or other sources if you have any questions.
Select Citation Style
Share
Share to social media
Facebook Twitter
URL
https://www.britannica.com/biography/Charles-II-king-of-Great-Britain-and-Ireland
Feedback
Thank you for your feedback 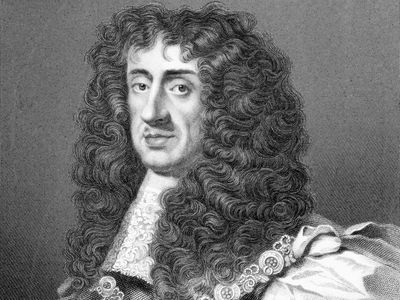 Charles II, byname The Merry Monarch, (born May 29, 1630, London—died February 6, 1685, London), king of Great Britain and Ireland (1660–85), who was restored to the throne after years of exile during the Puritan Commonwealth. The years of his reign are known in English history as the Restoration period. His political adaptability and his knowledge of men enabled him to steer his country through the convolutions of the struggle between Anglicans, Catholics, and Dissenters that marked much of his reign.

Charles II, the eldest surviving son of Charles I and Henrietta Maria of France, was born at St. James’s Palace, London. His early years were unremarkable, but before he was 20 his conventional education had been completely overshadowed by the harsh lessons of defeat in the Civil War against the Puritans and subsequent isolation and poverty. Thus Charles emerged into precocious maturity, cynical, self-indulgent, skilled in the sort of moral evasions that make life comfortable even in adversity.

Britannica Quiz
Kings and Emperors (Part III) Quiz
What emperor was known as the “Little Corporal? Who was the longest living monarch in Japanese history? Test your knowledge of the history of leadership with this quiz.

But though the early years of tawdry dissipation have tarnished the romance of his adventures, not all his actions were discreditable. He tried to fight his father’s battles in the west of England in 1645; he resisted the attempts of his mother and his sister Henrietta Anne to convert him to Catholicism and remained openly loyal to his Protestant faith. In 1648 he made strenuous efforts to save his father; and when, after Charles I’s execution in 1649, he was proclaimed Charles II by the Scots in defiance of the English republic, he was prepared to go to Scotland and swallow the stringently anti-Catholic and anti-Anglican Presbyterian Covenant as the price for alliance. But the sacrifice of friends and principles was futile and left him deeply embittered. The Scottish army was routed by the English under Oliver Cromwell at Dunbar in September 1650, and in 1651 Charles’s invasion of England ended in defeat at Worcester. The young king became a fugitive, hunted through England for 40 days but protected by a handful of his loyal subjects until he escaped to France in October 1651.

His safety was comfortless, however. He was destitute and friendless, unable to bring pressure against an increasingly powerful England. France and the Dutch United Provinces were closed to him by Cromwell’s diplomacy, and he turned to Spain, with whom he concluded a treaty in April 1656. He persuaded his brother James to relinquish his command in the French army and gave him some regiments of Anglo-Irish troops in Spanish service, but poverty doomed this nucleus of a royalist army to impotence. European princes took little interest in Charles and his cause, and his proffers of marriage were declined. Even Cromwell’s death did little to improve his prospects. But George Monck, one of Cromwell’s leading generals, realized that under Cromwell’s successors the country was in danger of being torn apart and with his formidable army created the situation favourable to Charles’s restoration in 1660.

Most Englishmen now favoured a return to a stable and legitimate monarchy, and, although more was known of Charles II’s vices than his virtues, he had, under the steadying influence of Edward Hyde, his chief adviser, avoided any damaging compromise of his religion or constitutional principles. With Hyde’s help, Charles issued in April 1660 his Declaration of Breda, expressing his personal desire for a general amnesty, liberty of conscience, an equitable settlement of land disputes, and full payment of arrears to the army. The actual terms were to be left to a free parliament, and on this provisional basis Charles was proclaimed king in May 1660. Landing at Dover on May 25, he reached a rejoicing London on his 30th birthday.

The unconditional nature of the settlement that took shape between 1660 and 1662 owed little to Charles’s intervention and must have exceeded his expectations. He was bound by the concessions made by his father in 1640 and 1641, but the Parliament elected in 1661 was determined on an uncompromising Anglican and royalist settlement. The Militia Act of 1661 gave Charles unprecedented authority to maintain a standing army, and the Corporation Act of 1661 allowed him to purge the boroughs of dissident officials. Other legislation placed strict limits on the press and on public assembly, and the 1662 Act of Uniformity created controls of education. An exclusive body of Anglican clergy and a well-armed landed gentry were the principal beneficiaries of Charles II’s restoration.

But within this narrow structure of upper-class loyalism there were irksome limitations on Charles’s independence. His efforts to extend religious toleration to his Nonconformist and Roman Catholic subjects were sharply rebuffed in 1663, and throughout his reign the House of Commons was to thwart the more generous impulses of his religious policy. A more pervasive and damaging limitation was on his financial independence. Although the Parliament voted the king an estimated annual income of £1,200,000, Charles had to wait many years before his revenues produced such a sum, and by then the damage of debt and discredit was irreparable. Charles was incapable of thrift; he found it painful to refuse petitioners. With the expensive disasters of the Anglo-Dutch War of 1665–67 the reputation of the restored king sank to its lowest level. His vigorous attempts to save London during the Great Fire of September 1666 could not make up for the negligence and maladministration that led to England’s naval defeat in June 1667.