Australian actress
verifiedCite
While every effort has been made to follow citation style rules, there may be some discrepancies. Please refer to the appropriate style manual or other sources if you have any questions.
Select Citation Style
Share
Share to social media
Facebook Twitter
URL
https://www.britannica.com/biography/Cate-Blanchett
Feedback
Thank you for your feedback

External Websites
Britannica Websites
Articles from Britannica Encyclopedias for elementary and high school students.
print Print
Please select which sections you would like to print:
verifiedCite
While every effort has been made to follow citation style rules, there may be some discrepancies. Please refer to the appropriate style manual or other sources if you have any questions.
Select Citation Style
Share
Share to social media
Facebook Twitter
URL
https://www.britannica.com/biography/Cate-Blanchett
Feedback
Thank you for your feedback 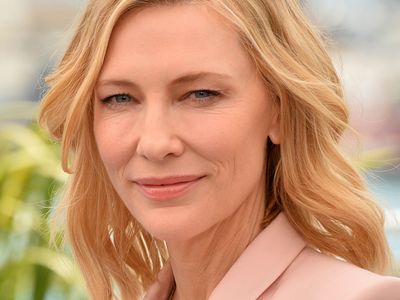 Blanchett grew up in suburban Melbourne with an Australian mother and an American father, who died when Blanchett was 10 years old. She studied art history at the University of Melbourne before graduating from the National Institute of Dramatic Art in 1992. Her professional acting career began on the Australian stage. She performed with the Sydney Theatre Company in Caryl Churchill’s Top Girls and Timothy Daly’s Kafka Dances. In 1993 she starred opposite Geoffrey Rush in David Mamet’s Oleanna, as a student who accuses her teacher of sexual harassment.

Films: Elizabeth and the Lord of the Rings series

Blanchett made her television debut in 1993, and she soon landed leading roles in the miniseries Heartland (1994) and Bordertown (1995). She moved to feature films with Paradise Road (1997), a historical drama about a Japanese war camp in World War II. Blanchett’s reputation grew with her next two feature films: the bittersweet romantic comedy Thank God He Met Lizzie (1997; later released as The Wedding Party) and Oscar and Lucinda (1997), in which she played a rebellious heiress ostracized from Australian society. Her breakthrough role was as young Queen Elizabeth I in the 1998 film Elizabeth, which earned her an Academy Award nomination and a Golden Globe Award for best actress. Blanchett was praised for capturing the emotional complexity of the queen’s development from a lovestruck adolescent to an indomitable political force who represses her emotional vulnerability.

Blanchett subsequently appeared in films that covered numerous genres and character types, securing her reputation as a versatile actress. She took supporting parts in Pushing Tin (1999), a comedy about air traffic controllers, and in the dramatic thriller The Talented Mr. Ripley (1999). As the lead character in The Gift (2000), she played a psychic whose visions involve her in the investigation of a local woman’s murder. In 2001 she portrayed a kidnapped housewife who falls in love with her captors in Bandits. She next appeared as the elf queen Galadriel in The Lord of the Rings trilogy (2001, 2002, and 2003), the film adaptations of J.R.R. Tolkien’s epic fantasy.

In the western The Missing (2003), Blanchett brought her trademark complexity to the role of a young woman forced to confront her estranged father (played by Tommy Lee Jones) in order to reclaim her kidnapped daughter. She earned further critical acclaim for her performance as an Irish journalist who runs afoul of the mob in Veronica Guerin (2003). In 2004 she starred in Wes Anderson’s offbeat comedy The Life Aquatic with Steve Zissou, playing a pregnant reporter in a bizarre love triangle with the ship’s captain (played by Bill Murray) and someone who may be his son (played by Owen Wilson).

Returning to her study of historical characters, Blanchett portrayed Hollywood star Katharine Hepburn in The Aviator (2004), Martin Scorsese’s biopic of the eccentric millionaire Howard Hughes, and won an Academy Award for the role. She later appeared in the dramas Babel (2006), The Good German (2006), and Notes on a Scandal (2006). In the unconventional biopic I’m Not There (2007), she starred as one of several characters based on the musician Bob Dylan at different stages in his life. As the character Jude, a star making the dramatic shift from acoustic folk to electric rock, Blanchett was praised for capturing the elusive and bewildering qualities attributed to Dylan. Her performance earned her another Academy Award nomination and a Golden Globe Award for best supporting actress.

In 2007 Blanchett reprised her role as the English queen in Elizabeth: The Golden Age, which explores Elizabeth’s political battles with Spain and her personal relationship with Sir Walter Raleigh; she earned another Oscar nomination for her performance. The following year she played the Soviet villain Irina Spalko in Steven Spielberg’s Indiana Jones and the Kingdom of the Crystal Skull (2008), another addition to the series of action-adventure films following the dashing archaeologist. In 2008 she also starred opposite Brad Pitt in The Curious Case of Benjamin Button, a drama about a man who ages backward. Two years later she appeared as Marion Loxley in Ridley Scott’s Robin Hood. The action drama starred Russell Crowe in the title role as the outlaw hero.

In the thriller Hanna (2011), Blanchett portrayed a CIA agent in pursuit of a former agent and his teenage daughter, whom he has trained to be an assassin. Blanchett again assumed the role of Galadriel in the Hobbit trilogy—An Unexpected Journey (2012), The Desolation of Smaug (2013), and The Battle of the Five Armies (2014), all based on the Tolkien novel that preceded The Lord of the Rings. Her performance in Woody Allen’s Blue Jasmine (2013), as a socialite struggling to cope with a decline in circumstances, won her further acclaim, including an Oscar for best actress. She played a French art historian and Resistance member in The Monuments Men (2014), which fictionalized Allied efforts to recover art stolen by the Nazis during World War II.

Blanchett then sank her teeth into the role of the wicked stepmother of the title character in Cinderella (2015). In Truth (2015) she played CBS producer Mary Mapes, who was fired after the accuracy of a segment by reporter Dan Rather on U.S. Pres. George W. Bush’s military service was called into question. Carol, a drama in which she played a married socialite who enters a romantic relationship with a younger store clerk (Rooney Mara), earned her a seventh Oscar nomination. She then joined the ensemble of Knight of Cups (2015), Terrence Malick’s experimental meditation on Hollywood, and later appeared in his film Song to Song (2017), a romantic drama set against the Austin, Texas, music scene. Also in 2017 Blanchett earned critical praise for her vivacious portrayal of Hela, the goddess of death, in Thor: Ragnarok. The next year she starred in Ocean’s 8, the female-driven reboot of the Ocean’s Eleven franchise from the early 2000s, and The House with a Clock in Its Walls, an adaptation of a 1973 children’s fantasy novel.

Blanchett was then lauded for her guest appearance as a performance artist akin to Marina Abramović on the mockumentary TV series Documentary Now! in 2019. That year she also played the eponymous character in Where’d You Go, Bernadette, a film based on the best-selling novel. Blanchett’s credits from 2020 included the TV miniseries Mrs. America, in which she portrayed the activist Phyllis Schlafly, who opposed the Equal Rights Amendment. In 2021 Blanchett appeared in the films Don’t Look Up, a dramedy about an impending comet strike that will destroy Earth, and  Guillermo del Toro’s Nightmare Alley. In the latter, a film noir adapted from a novel by William Lindsay Gresham, the actress played a manipulative psychoanalyst who meets a scheming carnival worker (Bradley Cooper). Blanchett earned widespread acclaim for her performance in Tár (2022), a character study about a trailblazing conductor whose career is derailed by allegations of sexual misconduct.

In addition to her film work, Blanchett remained active in the theatre. In 2008 she and her husband, writer Andrew Upton, became artistic directors of the Sydney Theatre Company. Blanchett left the position in 2013, though Upton remained. Her performances with the company included Hedda Gabler (2004) and The War of the Roses (2009). In 2017 she made her Broadway debut in The Present, which was based on a play by Anton Chekhov. For her performance, Blanchett received a Tony Award nomination.