queen of France
verifiedCite
While every effort has been made to follow citation style rules, there may be some discrepancies. Please refer to the appropriate style manual or other sources if you have any questions.
Select Citation Style
Share
Share to social media
Facebook Twitter
URL
https://www.britannica.com/biography/Catherine-de-Medici
Feedback
Thank you for your feedback

External Websites
print Print
Please select which sections you would like to print:
verifiedCite
While every effort has been made to follow citation style rules, there may be some discrepancies. Please refer to the appropriate style manual or other sources if you have any questions.
Select Citation Style
Share
Share to social media
Facebook Twitter
URL
https://www.britannica.com/biography/Catherine-de-Medici
Feedback
Thank you for your feedback 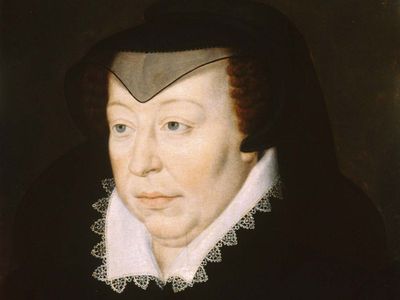 Role In:
Massacre of St. Bartholomew’s Day Wars of Religion

Who was Catherine de’ Medici?

Catherine de’ Medici was the queen consort of Henry II of France (1547–59) and regent of France. She was one of the most influential personalities of the Catholic–Huguenot wars (Wars of Religion; 1562–98). Three of her sons were kings of France: Francis II, Charles IX, and Henry III.

Where was Catherine de’ Medici born and raised?

Catherine de’ Medici was born in Florence, Italy, on April 13, 1519. She was educated by nuns in Florence and in Rome.

Who were Catherine de’ Medici’s parents?

Catherine de’ Medici was the daughter of Lorenzo di Piero de’ Medici, duca di Urbino, and Madeleine de La Tour d’Auvergne, a Bourbon princess related to many of the French nobility. Both of her parents died within weeks of her birth, leaving her an orphan.

What was Catherine de’ Medici best known for?

Catherine de’ Medici was best known for being the queen consort of Henry II of France (1547–59) and regent of France. She is also known for her involvement in the Massacre of St. Bartholomew's Day (1572)—part of the Catholic–Huguenot wars (Wars of Religion; 1562–98)—and for being mother to three kings of France.

Catherine was the daughter of Lorenzo di Piero de’ Medici, duca di Urbino, and Madeleine de La Tour d’Auvergne, a Bourbon princess related to many of the French nobility. Orphaned within days, Catherine was highly educated, trained, and disciplined by nuns in Florence and Rome and married in 1533 by her uncle, Pope Clement VII, to Henry, duc d’Orléans, who inherited the French crown from his father, Francis I, in April 1547. Artistic, energetic, and extraverted, as well as discreet, courageous, and gay, Catherine was greatly esteemed at the dazzling court of Francis I, from which she derived both her political attitudes and her passion for building. Of the chateaus she designed herself—including the Tuileries—Chenonceaux was her unfinished masterpiece.

In spite of Henry’s abiding attachment to his mistress Diane de Poitiers, Catherine’s marriage was not unsuccessful and, after 10 anxious years, she bore him 10 children, of whom 4 boys and 3 girls survived. She herself supervised their education. Thus occupied, Catherine lived privately though she was appointed regent in 1552 during Henry’s absence at the siege of Metz. Her ability and eloquence were acclaimed after the Spanish victory of Saint-Quentin in Picardy in 1557, possibly the origin of her perpetual fear of Spain, which remained, through changing circumstances, the touchstone of her judgments. It is essential to understand this in order to discern the coherence of her career.

Catherine’s first great political crisis came in July 1559 upon the accidental death of Henry II, a traumatic bereavement from which it is doubtful that she ever recovered. Under her son, Francis II, power was retained by the Guise brothers. Thus began her lifelong struggle—explicit in her correspondence—with these extremists who, supported by Spain and the papacy, sought to dominate the crown and extinguish its independence in the commingled interests of European Catholicism and personal aggrandizement. It is also necessary to understand this political struggle of the Catholic crown with its own ultramontane extremists and to perceive its fluctuations in changing circumstances, in order to realize the fundamental consistency of Catherine’s career. Her essentially moderate influence was first perceptible during the Conspiracy of Amboise (March 1560), an instance of tumultuous petitioning by the Huguenot gentry, primarily against Guisard persecution in the name of the King. Her merciful Edict of Amboise (March 1560) was followed in May by that of Romorantin, which distinguished heresy from sedition, thereby detaching faith from allegiance.

Catherine’s second great political crisis came with the premature death on December 5, 1560, of Francis II, whose royal authority the Guises had monopolized. Catherine succeeded in obtaining the regency for Charles IX, with Antoine de Bourbon, king of Navarre and first prince of the blood, as lieutenant general, to whom the Protestants vainly looked for leadership.

The 10 years from 1560 to 1570 were, politically, the most important of Catherine’s life. They witnessed the first three civil wars and her desperate struggle against the Catholic extremists for the independence of the crown, the maintenance of peace, and the enforcement of limited toleration. In 1561, with the support of the distinguished chancellor Michel de L’Hospital, she began by trying to propitiate the leaders of both religious factions, to effect reforms and economies by unassailably traditional methods, and to settle the religious conflict. Religious reconciliation was the conveners’ purpose of the Colloquy of Poissy (September–November 1561). Catherine appointed a mixed commission of moderates that devised two formulas of consummate ambiguity, by which they hoped to resolve the basic, Eucharist controversy. Possibly Catherine’s most concrete achievement was the Edict of January 1562, which followed the failure of reconciliation. This afforded the Calvinists licensed coexistence with specific safeguards. Unlike the proposals of Poissy, the edict was law, which the Protestants accepted and the Catholics rejected. This rejection was one basic element in the outbreak of civil war in 1562, in which—as she had predicted—Catherine fell, politically, into the clutches of the extremists, because the Catholic crown might protect its Protestant subjects in law but could not defend them in arms. Thenceforth the problem of religion was one of power, public order, and administration.

Catherine ended the first civil war in March 1563 by the Edict of Amboise, an attenuated version of the Edict of January. In August 1563 she declared the King of age in the Parlement of Rouen and, from April 1564 to January 1566, conducted him on a marathon itinerary round France. Its principal purpose was to execute the edict and, through a meeting at Bayonne in June 1565, to seek to strengthen peaceful relations between the crown and Spain and to negotiate for Charles’s marriage to Elizabeth of Austria. During the period 1564–68, Catherine was unable, for complex reasons, to withstand the cardinal Lorraine, statesman of the Guises, who largely provoked the second and third civil wars. She quickly terminated the second (September 1567–March 1568) with the Peace of Longjumeau, a renewal of Amboise. But she was unable to avert its revocation (August 1568), which heralded the third civil war. She was not primarily responsible for the more far-reaching Treaty of Saint-Germain (August 1570), but she succeeded in disgracing the Guises.

For the next two years Catherine’s policy was one of peace and general reconciliation. This she envisaged in terms of the marriage of her daughter Marguerite to the young Protestant leader, Henry of Navarre (later Henry IV of France), and alliance with England through the marriage of her son Henry, duc d’Anjou, or, failing him, his younger brother François, duc d’Alençon, to Queen Elizabeth. The complexity of Catherine’s position during these years cannot be briefly explained. To some extent she was eclipsed by Louis of Nassau and a group of Flemish exiles and youthful Protestants who surrounded the King and urged him to make war upon Spain in the Netherlands, which Catherine inevitably resisted.