You have reached the cached page for https://www.e-borghi.com/en/village/Torino/491/agli%C3%A8
Below is a snapshot of the Web page as it appeared on 6/24/2020 (the last time our crawler visited it). This is the version of the page that was used for ranking your search results. The page may have changed since we last cached it. To see what might have changed (without the highlights), go to the current page.
You searched for: +Castle d'Agliè, Piedmont We have highlighted matching words that appear in the page below.
Bing is not responsible for the content of this page.
The italian village of Agliè, Torino in Piedmont, Italy - e-borghi
The most complete online resource about Italian villages
« Villages » Torino » Piedmont

Share
A small village located a few kilometers from Turin, Agliè houses one of the Royal Residences of Piedmont, recognized since 1997 as a World Heritage Site by Unesco: the Ducal Castle of Agliè. Do not miss a walk along the narrow streets of the village, under the suggestive arcades and admiring the beautiful churches. After taking a dip into history, you cannot miss a taste of the local cuisine in one of the restaurants in the area and typical products such as Torcetti di Agliè and local wines.

A look at Agliè 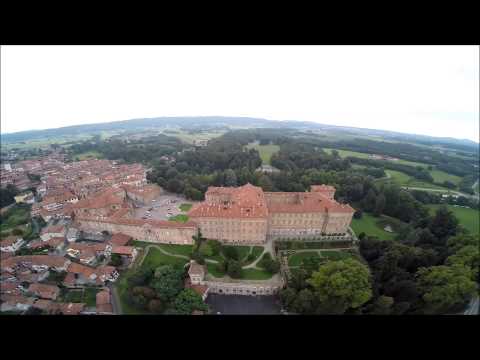 The original nucleus of Agliè (Ajé in Piedmontese), built on the ruins of the ancient Roman city of Alladium, was probably located on the hills in Madonne delle Grazie, was mentioned for the first time in 1019. At the time Agliè was a castle, built to defend Macugnano. The current name appears instead in 1141, when the feudal lords of the Canavese divided the territory and the village passed under the control of the San Martino di Rivarolo and Agliè.

In 1386 the peasants around the village gave rise to a revolt, remembered with the name of Tuchinaggio, and violently cut off by Amedeo VII of Savoy, also called Conte Rosso. Perhaps thanks to his good governance, Aglie did not take part in this rebellion. Agliè was involved in the struggles between the Guelphs of San Martino d'Agliè and the Ghibellines of the Counts of Valperga. In 1391 thanks to the Savoy peace came. The Alliadese asked their lords, the Counts of Agliè, some concessions and privileges obtaining them thanks to the loyalty shown to their feudal lords at the time of Tuchinaggio. Later in 1448 the municipal statutes were granted. After the mid-sixteenth century, Aglie also had to suffer the consequences of the war between Savoy and France.

Peace came in 1561, when the Counts of Agliè swore loyalty to the Duke Emanuele Filiberto of Savoy. The seventeenth century saw the appearance on the historical scene a very important figure for the country, Filippo San Martino di Agliè, to whom we owe the restoration and expansion of the castle of Agliè. After the death of Philip, which took place in 1667, it is necessary to wait about a century before the enlargements of the castle are completed, which we can still admire today. In 1796 the village was invaded by the French and the castle was looted. In 1825 Carlo Felice came into possession of the castle and entrusted its restoration to the architect Borda di Saluzzo, who also built the small internal theater.

The ducal castle of Agliè is one of the main attractions of the village, together with Villa Il Meleto, which was the summer residence of the poet Guido Gozzano.

Count Filippo Giuseppe of San Martino di Agliè was born in 1604, he was the second of nine sons of Count Giulio Cesare of San Martino d'Agliè marquis of San Germano and his wife Ottavia Gentile.Filippo, being a cadet, undertook ecclesiastical studies which he abandoned soon to devote himself to the military career. He was later a chamber gentleman of the cardinal Maurizio di Savoia from 1627 to 1630, when he was appointed lieutenant in the Corazza company of Duke Vittorio Amedeo I. He was also Minister of State, Superintendent General of Finance, Marshal General of the Army, Grand Master of House, Knight of the Supreme Order of the SS. Annunziata and many other things.

When Duke Vittorio Amedeo I died in 1637, his son Carlo Emanuele II was too young to succeed him and so his mother, Maria Cristina of France (first Madama Reale, daughter of King Henry IV), assumed power as regent. His regency, between 1637 and 1648, divided into two factions the ducal court of Savoy: Principalists and Madamists. Philip sided in favor of Cristina and became the favorite, personal advisor and Minister of State. They mainly had his political and diplomatic skills that managed to preserve the throne to the young duke and the independence of the Duchy.

The Regent Maria Cristina and Filippo d 'Agliè had to oppose the intentions of the French king Louis XIII (brother of the Regent) and at the same time the anti-French opposition of the pro-Spaniard brothers-in-law, Prince Cardinal Maurizio and Prince of Carignano, Tommaso Francesco di Savoia, brothers of the late Duke Vittorio Amedeo I. For these choices, Philip was antagonized by a few powerful people, including Cardinal Richelieu who, by a stratagem, arrested him in 1640 and held him prisoner in the castle of Vincennes in France. Two years later, at the death of the Cardinal, by the interest of Maria Cristina at his brother Louis XIII, Philip was finally freed.

Back in Turin, in 1645 he was appointed marshal general of the army and finally Grand Master of the House of Savoy. He remained in the service of the ducal house until 1663, when he retired to private life. In recent years, he regularly attended the convent of Monte dei Cappuccini in Turin.

Count Filippo d'Agliè was also famous for his excellent artistic skills, a good musician and a brilliant choreographer: he wrote and directed countless ballets for the Court of Turin, including "Il Gridelino" and "Il Tabacco".

Philip died, probably in the Royal Palace of Turin, July 19, 1667. He was buried, as he requested, in the bare land of the convent of Monte dei Cappuccini. Currently his remains rest in the vestibule of the Capuchin church.

Village of Agliè
Municipality of Agliè

Unesco site:
Residences of the Royal House of Savoy
and Sacred Mounts of Piedmont and Lombardy

Ducal Castle
The Castle of Agliè, originally built in 1141, was destroyed and rebuilt several times.
Piazza del Castello, 2, Agliè
Church of the Confraternity of Santa Marta
In the heart of Agliè is the Confraternity of Santa Marta.
Via Cesare Battisti, Agliè
Church of the Madonna delle Grazie
According to an ancient tradition not far from the present church, there was a pylon with a fresc...
Via Chiesa Madonna delle Grazie, Agliè
Guido Gozzano's Villa Meleto
Il Meleto, summer residence of the poet Guido Gozzano is a nineteenth-century villa located at th...
Via Meleto, 23, Agliè
Church of San Rocco
The Church of San Rocco di Agliè was built by the alladiesi in the first half of 1600, when the g...
Via Principe Amedeo, Agliè
Chapel of San Grato
The primitive chapel of San Grato in Agliè dates back to a period between the end of the seventee...
Via San Grato, Agliè
Church of San Michele Arcangelo in Beaulard
the parish church of San Michele Arcangelo in Beaulard is known since 1065 and is one of the most...

La Grotta della Beaume, Oulx (Torino)
81.43 Kilometers from Agliè
Benedictine Abbey of SS. Peter and Andrew
the abbey of Novalesa was founded in 726 by Abbone, a Merovingian noble, in Cenischia valley.

Borgata San Pietro, 4, Novalesa (Torino)
62.94 Kilometers from Agliè
Puy-Beulard Xerothermic Oasis
The pine grove along the riverbed of Dora of Bardonecchia, in Susa Valley, is known by hikers and...

Borgata Constans, 15, Oulx (Torino)
84.89 Kilometers from Agliè
Former Social Daily Etnographic Museum
the ethnographic museum of Chiusa di San Michele in Susa Valley is housed in the premises of the ...

5 unmissable destinations in Piedmont in November
It is in November that Piedmont releases all its poetry. The colors of autumn enhance the essence of its villages. Grinzane Cavour, Vogogna, Avigliana, Serralunga d'Alba and Agliè are certainly among the most spectacular. Here autumn is completed with the wonder of each individual center, mingling with the treasures of a unique landscape, where nature seems to welcome, wrap, embrace the architectural treasures, where the magic of the f...
Continue

With the patronage of: