You have reached the cached page for https://de.zxc.wiki/wiki/Schloss_Lichtenburg
Below is a snapshot of the Web page as it appeared on 10/11/2021 (the last time our crawler visited it). This is the version of the page that was used for ranking your search results. The page may have changed since we last cached it. To see what might have changed (without the highlights), go to the current page.
You searched for: +Castle Lichtenburg We have highlighted matching words that appear in the page below.
Bing is not responsible for the content of this page.
Lichtenburg Castle - zxc.wiki 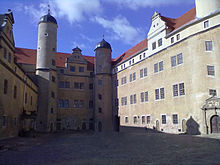 The light castle was build in the 16th century Renaissance castle in Prettin . It stands on the site of an earlier monastery and was built as a widow's seat for the Electresses of Saxony .

The Lichtenbergk house was the name given to a main establishment of the Antonite Order in the spa district near Prettin . His last preceptor, Wolfgang Reissenbusch , frequented Luther's house. Since the last remaining Antonite monks turned to the Reformation in 1525, the monastery was closed. Individual monks received an annuity. In 1518, in the Antoniterhaus Lichtenbergk, Martin Luther first met Georg Spalatin , Chancellor of the Electorate of Saxony , who assured him of the support of the Saxon Elector Friedrich the Wise for his ecclesiastical reform efforts.

The Antoniterkloster Lichtenbergk was first mentioned in a document in 1315. After its dissolution , the Brandenburg Electress Elisabeth , who had fled from her old-believing husband, Elector Joachim I of Brandenburg , lived in the former monastery from 1536 to 1546 .

Gate to the museum

Later August I of Saxony had the monastery buildings demolished and, at the request of his wife Anna, built a castle, the "Lichtenburg", in the style of the Saxon Renaissance . The outstanding resident was the Saxon Electress Hedwig , widow of Elector Christian II , who had her widow's residence here from 1611 to 1641 . Other residents: Electress Anna (1532–1585), builder of the Renaissance - St. Anna Castle Church from 1581, Electress widow Anna Sophie (1647–1717), mother of Augustus the Strong, and her sister Wilhelmine Ernestine von der Pfalz (1650–1706 ).

The Lichtenburg became an Electoral Saxon prison from 1812 - moved here from Torgau . Lichtenburg later became the Prussian penal institution, which, after the Prussian Penal Code was introduced, served as a penitentiary for male prisoners in the province of Saxony from 1851 until its closure in 1928 . Under the National Socialists , the Lichtenburg concentration camp was set up here for men from 1933 to 1937 and then for women until 1939.

Today the Lichtenburg Museum of the City of Prettin and since January 1st 2007 also part of the Foundation Memorials Saxony-Anhalt.