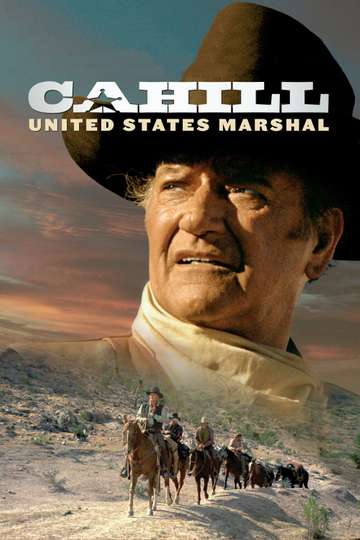 Fancy watching 'Cahill U.S. Marshal' on your TV or mobile device at home? Hunting down a streaming service to buy, rent, download, or view the Andrew V. McLaglen-directed movie via subscription can be confusing, so we here at Moviefone want to do right by you.

Read on for a listing of streaming and cable services - including rental, purchase, and subscription options - along with the availability of 'Cahill U.S. Marshal' on each platform. Now, before we get into all the details of how you can watch 'Cahill U.S. Marshal' right now, here are some particulars about the Batjac Productions, Warner Bros. Pictures western flick.

Released July 11th, 1973, 'Cahill U.S. Marshal' stars John Wayne, George Kennedy, Gary Grimes, Neville Brand The PG movie has a runtime of about 1 hr 43 min, and received a user score of 61 (out of 100) on TMDb, which assembled reviews from 93 top users.

You probably already know what the movie's about, but just in case... Here's the plot: "J.D. Cahill is the toughest U.S. Marshal they've got, just the sound of his name makes bad guys stop in their tracks, so when his two young boy's want to get his attention they decide to rob a bank. They end up getting more than they bargained for."

Two Mules for Sister Sara
Hogan, on his way to do some reconnaissance for a future mission to ca...

Big Jake
An aging Texas cattle man who has outlived his time swings into action...

She Wore a Yellow Ribbon
After Custer and the 7th Cavalry are wiped out by Indians, everyone ex...

Paint Your Wagon
A Michigan farmer and a prospector form a partnership in the Californi...

The War Wagon
An ex-con seeks revenge on the man who put him in prison by planning a...

True Grit
The murder of her father sends a teenage tomboy on a mission of 'justi...

Belfast
Drawing on inspiration from his own life, writer and director...
Read full review

Eternals
Drowning in too many characters, convoluted plotting and disappointingly...
Read full review

Welcome to hellâ€”a.k.a. Belle Reve, the prison with the highest mortality rate...