You have reached the cached page for https://www.amazon.com/Born-Into-Brothels-Calcuttas-Light/dp/B000AJHITM
Below is a snapshot of the Web page as it appeared on 9/30/2020 (the last time our crawler visited it). This is the version of the page that was used for ranking your search results. The page may have changed since we last cached it. To see what might have changed (without the highlights), go to the current page.
You searched for: +Born Into Brothels: Calcutta's Red Light Kids We have highlighted matching words that appear in the page below.
Bing is not responsible for the content of this page.
Amazon.com: Born Into Brothels: Calcutta's Red Light Kids: Movies & TV 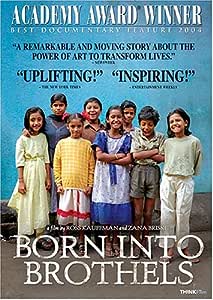 BORN INTO BROTHELS is an inspiring look at the transformative journey of a group of extraordinary children in Calcuttas red light district. Voted Best Documentary by the National Board of Review and the Los Angeles Film Critics Association. BORN INTO BROTHELS, which was produced and directed by New York based filmmakers Zana Briski and Ross Kauffman, also garnered over 20 major film festival awards including the Audience Award at the Sundance Film Festival and the Best Documentary Award at the Seattle International Film Festival.

A tribute to the resiliency of childhood and the restorative power of art, BORN INTO BROTHELS is a portrait of several unforgettable children who live in the red light district of Calcutta where their mothers work as prostitutes. Zana Briski, a New York based photographer, gives each of these youngsters a camera and teaches them how to take pictures, simultaneously causing them to look at their world with new eyes. Together with Ross Kauffman, Briski captures the magical way in which beauty can be found in the most unlikely of places and how a bright and promising future becomes a possibility for children who previously had no future at all.

Touching and heartfelt, yet devoid of sentimentality, BORN INTO BROTHELS defies the tear-stained tourist snapshot of the global underbelly. Briski spent years with these children and became a part of their lives. Their photographs are prisms into their souls, rather than anthropological curiosities, and a true testimony to the power of the indelible creative spirit.

"A REMARKABLE AND MOVING STORY ABOUT THE POWER OF ART TO TRANSFORM LIVES." -- David Ansen, NEWSWEEK

4.5 out of 5 stars
4.5 out of 5
132 global ratings
How are ratings calculated?
To calculate the overall star rating and percentage breakdown by star, we don’t use a simple average. Instead, our system considers things like how recent a review is and if the reviewer bought the item on Amazon. It also analyzes reviews to verify trustworthiness.
Top reviews

Amazon Customer
5.0 out of 5 stars Through the lens we see them as people
Reviewed in the United States on February 26, 2017
Verified Purchase
This documentary is a beautiful and painful look at the lives of the children of women who are prostituted in Calcutta and involved in other illegal industries around the red light district. In the fall of 2016 I spent three months working with children who were trafficked or abused in Nepal. I saw my children in the children in "Born into Brothels." This documentary highlights that these children are children. It is easy to label them and make them statistics and forget that they are children. But they are also children who are growing up in a red light district, forced to recognize that they might follow their mothers into sex work, not have food to eat tomorrow, or simply never leave this area (the biggest desire of many of the children). The filmmaker, Zana Briski, beautiful guides you through their lives as she teaches them photography and strives to improve their futures. I love the focus on their photography. The children are featured as students and as photographers in their own right. It is so empowering. This is a sad story, but it is also inspiring and sheds light on the potential that anyone has when given opportunities. Unfortunately, not all of these children are able to take the opportunities that are presented to them, but the filmmaker's efforts to help them beautifully cross through the line of objectivity. "Born into Brothels" is an important film because it forces the viewer to see these far away children as people and to realize that when we reach out to one another, we can make a difference, even if it is only temporary.
Read more
3 people found this helpful
Helpful
Comment Report abuse

Kylie Hewitt
5.0 out of 5 stars Love this Movie
Reviewed in the United States on August 18, 2016
Verified Purchase
I feel in love with this movie after watching it. There's a complex story that is told, but I believe the best of it is that when given an opportunity, outcast children can thrive. The kids being documented are both street smart and intelligent, but there are hindered by the obstacles put in their way due to the stigma that surrounds them.

There are many issues that are featured in this movie and not nearly enough solutions. but as the critical reviews state it is uplifting to see children find joy through the lens of a camera.
Read more
One person found this helpful
Helpful
Comment Report abuse

nrunn
4.0 out of 5 stars Great Story and Good for Teaching Analysis
Reviewed in the United States on October 23, 2017
Verified Purchase
Bought this to teach analysis in an AP English Language class... was great! I only showed clips to my students, but they 1.) immediately noticed all the layers in each scene; and 2.) really liked the documentary itself. Although it's not one I would watch over and over again on my own, I'll probably show a little more in class next year, and it's definitely a keeper.
Read more
One person found this helpful
Helpful
Comment Report abuse

P. Lazarus
5.0 out of 5 stars God please untwist these children's knotted fate;
Reviewed in the United States on December 17, 2014
Verified Purchase
God please untwist these children's knotted fate; this film gives you a look into the lives of children born in to brothels and the social class structure that dictate who and what they will become but just by getting introduced to film coupled with their own creativity has planned a seed to succeed
Read more
2 people found this helpful
Helpful
Comment Report abuse

Alysia McDonald
5.0 out of 5 stars Eye Opening Film
Reviewed in the United States on March 25, 2013
Verified Purchase
Such a great film! This really opens your eyes to what these children live through each day and their talent amazes me. Their culture and the many differences are evident, which just adds to their amazing photos! The film did seem to be more about the children and their lives rather than photography, which is fine, but unexpected.
Read more
One person found this helpful
Helpful
Comment Report abuse

John Farr
5.0 out of 5 stars Born into Brothels
Reviewed in the United States on July 18, 2007
Verified Purchase
Both sobering and uplifting, Briski and Ross Kauffmann's documentary takes us inside the harsh, closed world of prostitution in Calcutta. Most often the children's parents are foul-mouthed and abusive, and India's caste structure minimizes the chances for these virtual orphans to advance in society. But Briski's attempt is still noble. We're humbled by the innocent spirit emanating from these special kids, most of whom still naively hope for a better life. As we see these dreams fade with the parents reclaiming their futures, we still admire their intent, and mourn their reality.
Read more
3 people found this helpful
Helpful
Comment Report abuse

maytag man
5.0 out of 5 stars censored
Reviewed in the United States on July 29, 2020
Verified Purchase
The movie was censored. It had left out politically incorrect moments. Not exactly the same as what I had seen on PBS.
Read more
Helpful
Comment Report abuse
See all reviews

Carno Polo
4.0 out of 5 stars a good documentary about how art can help social emancipation
Reviewed in the United Kingdom on February 16, 2013
Verified Purchase
An interesting documentary on the condition of children in the red district of Calcutta. Briski spent a lot of time there and obviously identifies with her subject, though unfortunately she is not always successful in achieving her aim of giving children of prostitutes a life out of the condition they are born in. Given the overall situation in Calcutta, these children are not at the bottom, and are generally well fed, but lack opportunities for education and personal achievement.

Briski has been accused of exploiting the children as objects in her documentary, but I think this is unfair: there is nothing wrong in filming your work if this raises awareness and helps with fund raising, which this film certainly did.

At the end of the film, one is left with mixed feelings: on the one hand, a few kids make it and through their photos achieve emancipation from the slums. On the other hand, many don't, either because their parents prevent them or because they can't make the fateful decision to leave home.
Read more
One person found this helpful
Report abuse

Daniel Côté
2.0 out of 5 stars dvd Born into Brotehls
Reviewed in Canada on December 4, 2018
Verified Purchase
The DvD mentions that there is also a french version audio. While the French track is nonexistent.
Read more
Report abuse

H S Marks
5.0 out of 5 stars the story continues on DVD
Reviewed in the United Kingdom on March 27, 2007
Verified Purchase
The follow-up material on this DVD does bring a happy ending.

The releasing company locked down trailers at the disc head which

subtitles. Your player will either display them or not.