You have reached the cached page for https://www.fernbyfilms.com/2021/08/19/movie-review-blood-red-sky/
Below is a snapshot of the Web page as it appeared on 11/22/2021 (the last time our crawler visited it). This is the version of the page that was used for ranking your search results. The page may have changed since we last cached it. To see what might have changed (without the highlights), go to the current page.
You searched for: +Blood Red Sky movie We have highlighted matching words that appear in the page below.
Bing is not responsible for the content of this page.
Movie Review – Blood Red Sky
Skip to content

Boasting an incredible premise, Blood Red Sky is a terrific little slice of airborne horror that works far better than its Netflix platform might give it credit for. If I can paraphrase Speed for a moment: There’s a vampire on a plane. Once the plane reaches 50,000 feet, the terrorists reveal themselves. When the plane drops below 50,000 feet, the vampire attacks. What do you do? What do you do? This electrifying idea builds upon a very human response in almost every airplane disaster film, that of pure survival, although typically it’s either terrorists or vampires, not both at the same time. Through simple storytelling techniques, Blood Red Sky evokes sympathy for the central character, a female vampire trying to eke out a secretive existence brought upon her without her consent, thrust into a terrifying scenario when a gang of terrorists take over her plane, and although the central character commits some unspeakable horrors upon unsuspecting humans aboard the aircraft at various points throughout, there’s a tragedy to her predicament that elicits a measure of understanding from the viewer. 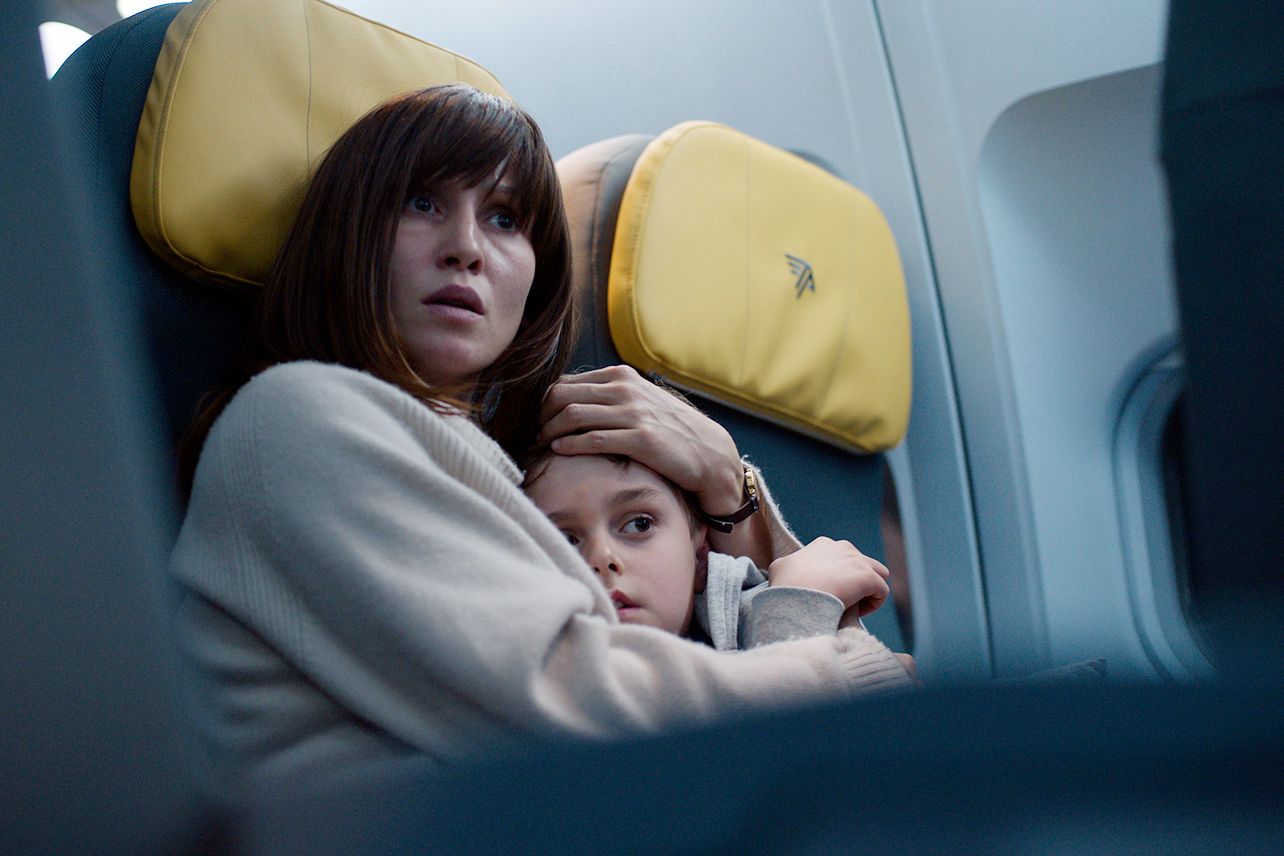 A German woman, Nadja (Peri Baumeister – The Last Kingdom) lives with her son, Elias (Carl Anton Koch) in a secretive, hidden life; Nadja is a vampire, bitten years prior when her husband was killed by another blood-sucker. She seeks respite from the blood craving via a new serum in the United States, and boards a trans-Atlantic flight to get there. Unwittingly, a gang of terrorists are also aboard for their own nefarious purposes. Led by the committed Berg (Dominic Purcell), and including the sadistic soldier Eightball (Alexander Scheer – Pirates Of The Caribbean: Salazar’s Revenge, Enfant Terrible), the terrorists plan to hijack and crash the plane under the pretence of Muslim extremism, while escaping out the door for rendezvous with accomplices. After Eightball shoots Nadja, seemingly killing her, he unleashes her supressed vampire rage, a torment she has until now resisted. Although initially overpowering several of the hijackers, eventually Nadja’s bloodlust takes over and some of her victims begin to turn into vampires themselves, a snowball effect that has dire consequences for all aboard, particularly her young son – who is perfectly normal – and the friendly Farid (Kais Setti – Dogs Of Berlin), who wants to help the young woman and get the plane to safety. Waiting for them on the ground are an elite group of tactical commandos, led by Colonel Alan Drummond (Graham McTavish), who will take absolutely no prisoners in what he sees as a terrorist incident. 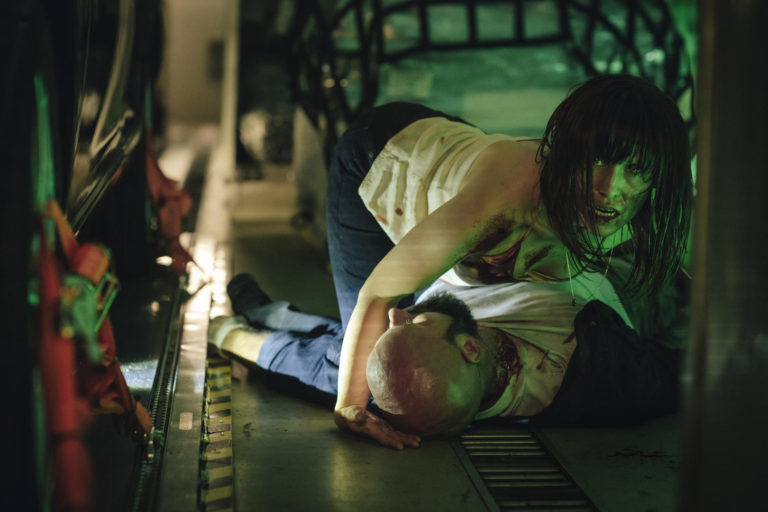 When you think of vampire films, you rarely think of them as heroes. They’re either outright villains or sensual shut-ins, but hardly ever known for being the only hope between human survival and terrorist destruction. Blood Red Sky initially sets up Nadja’s arc as something heroic, with the film offering the vampires in this world as being creatures of tormented animalism but wholeheartedly tragic outcomes, which makes her eventual unshackling of her true form midway through the movie a bit of a hell yes fist-pump moment. This elation for the viewer, that a bunch of asshole terrorists is about to have their asses torn out, is short-lived, however, for the true violence of Nadja’s vampire nature, a creature of rage and violence, blood and death, takes hold and it is a depiction of ferocity and anguish the likes of which we haven’t seen (in the mainstream) in quite some time. The film’s vampires aren’t creatures of refinement or intelligence, rather they’re beasts of pure primal instinct, driven to feed on whatever moves nearby, be it human or animal. Like a shark driven mad by blood in the water, so too are this film’s vampires, and as the numbers increase the situation slowly becomes ever more dire for those remaining humans aboard the aircraft. 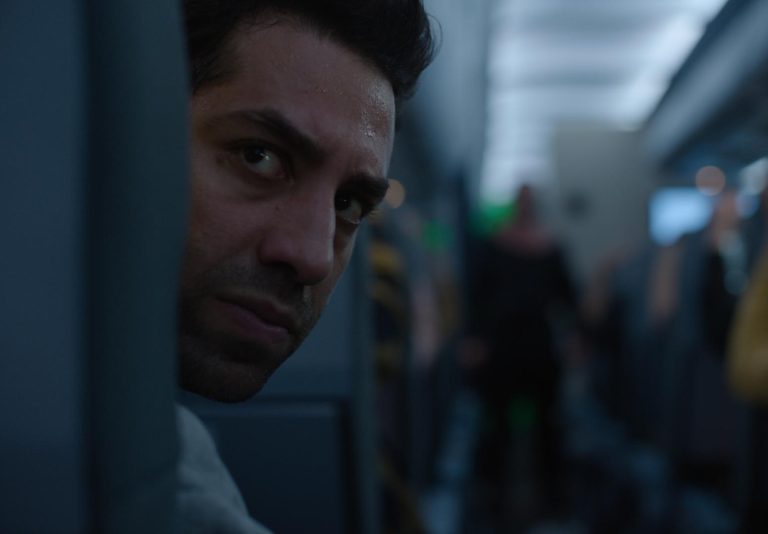 Co-writers Stefan Holtz and Peter Thorwarth (who also directs) have concocted a film that delivers the tropes of both vampire films and hostage thrillers by smashing them together in an orgy of limb-shredding violence. Cleverly, they also throw in a healthy mix of human optimism and tragedy, by making Nadja a vampire by accident and consequently turning her anguish at being driven to kill into something of a plot pivot. The loss of control of her humanity, how that affects her son, how it affects how others perceive her, is a strong element in the film’s funereal first half, with both Nadja and Elias making their way from hotel room to airport lounge to eventually their assigned seats, all without incident. One the stress triggers kick in, however, Nadja’s worst fears are realised as Dominic Purcell’s rag-tag bunch of hijackers kick off their own mission, and the two destructive worlds collide. The script kinda devolves into a series of ever-increasingly violent subgenre tropes, as both the body count rises and the altitude decreases, all with ratcheting hurdles both plot and mechanics to overcome. Who flies the plane if the pilot is dead, and the co-pilot is among the hijacker cohort? What happens when a brown-skinned dude lands the plane and sits squarely in the gunsights of special forces snipers predisposed to assuming he’s a terrorist? All intriguing questions, and all surrounded by a wicked excess of blood and gore that will satisfy even the hardest vampire fanboy.

While the film trades primarily on sheer brutal violence and the audience’s pre-emptive understanding of vampires, the plot mechanics are redolent of the films of Zemeckis in their intricacy, with every spare moment spent turning the thumbscrews of the dire situation at hand to the point you can’t quite work out how it’ll all end. The film does make the fatal flaw of starting off with part of the climax, which has become a problematic issue for modern filmmakers these days in that it undercuts inherent tension and shock-value depicting some certainty when a thriller ought not to, but the journey itself is still worth the price of admission. Circumstance and contrivance do slide into the mix here and there, and there’s a little bit of repetition early on as the hijackers bicker amongst themselves – and there’s always one absolute psycho loony among them to spoil what would have been an otherwise smooth terrorist incident – but the film’s bristling endowment of the viewer to root for the vampires as opposed to the villainous humans is chief among its successes.

Blood Red Sky is led by the solid talent of Peri Baumeister in the lead role of Nadja. Admittedly for most of the film she’s buried beneath a thick layer of vampire prosthetic makeup, but the early sequences setting up her character, as well as mid-film exposition depicting the moment she became one in the first place, is quite well done. Baumeister elicits all the sympathy for her turn as the unwilling creature of myth who turns up when we need her most, and she’s aided in her role by the accompanying child-actor in Carl Koch. Koch isn’t quite a gifted screen actor for his age, but he adequately provides the requisite maternal trajectory for Nadja to propel the narrative forward as needed. Alexander Scheer seems to be having a blast playing the often fingernail-shredding insanity of Eightball, the crucial grit in the wheel of perfection the terrorists have rolled for themselves, and his catalyst for the central idea of the film comes with enormously difficult to believe convenience: as the film’s resident nutjob, you know he’s somehow going to be able to survive long enough to remain problematic for everyone, but exactly how he goes from schizoid hijacker to vampire lore expert in the space of five minutes was a major point of contention for me. 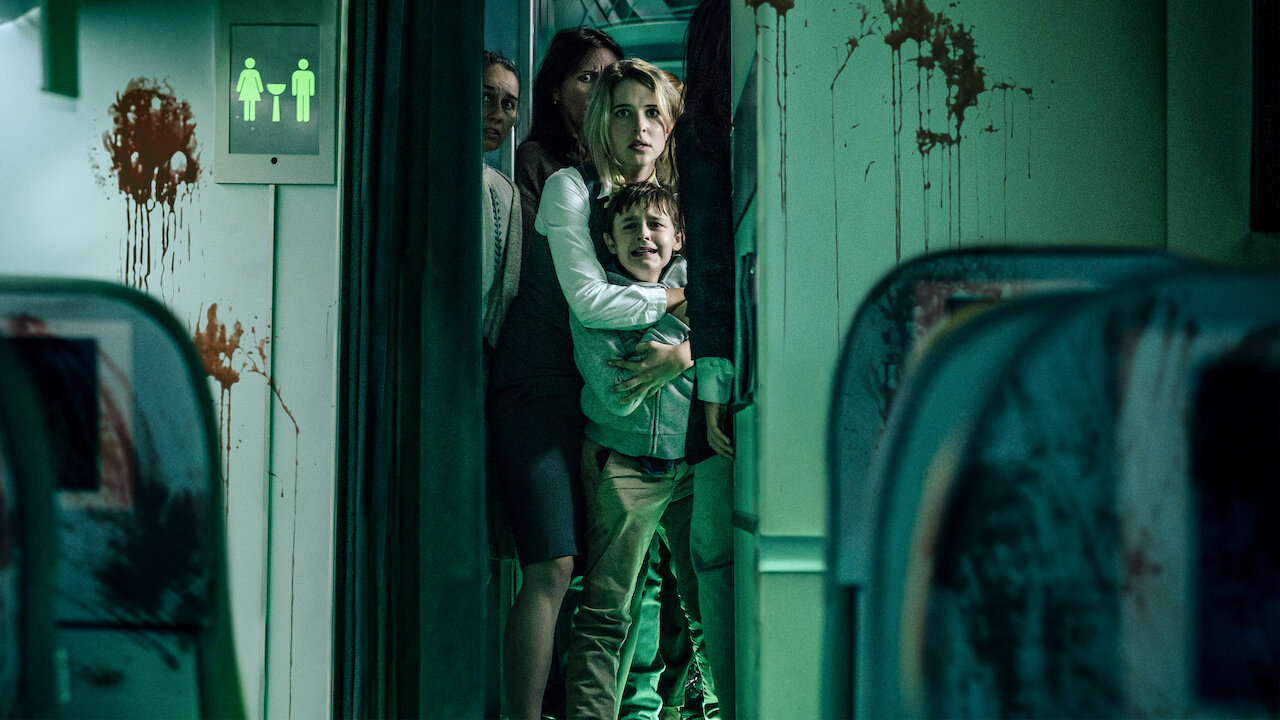 Kais Setti is solid as the straight-arrow Farid, Hollywood star-power ring-ins Dominic Purcell (television’s Prison Break) and Graham McTavish (The Hobbit trilogy) are amenable as their respective characters, and the gaggle of German and Dutch supporting players offer momentary diversions as various passengers aboard this ill-fated flight. Not all of them make it out alive, it has to be said, and the film gives a few of them enough time to become liked by the audience before all hell breaks loose. Nobody really puts a foot wrong here, asked to perform some plainly ludicrous horror gags, and everyone gamely goes about their business. Director Peter Thorwarth doesn’t hold back with the violence and blood, either. There’s gallons of spurting arterial blood across the screen by the time this film ends, although he’s quite often relatively circumspect about showing the flesh-tearing elements, the result of said violence is always visceral. The camerawork in the film is also something to be applauded, with a steady hand behind the lens offering assured and well-designed shots and editorial finesse, as well as shuddering horror at the appropriate moments. Kudos also to German DP Yoshi Heimrath, who gives the film a sense of crisp elegance mixed with raw, gritty horror (a night sequence in an isolated farmhouse in the German forest is scary as hell) and his lensing goes a long way to how effective Blood Red Sky turns out. 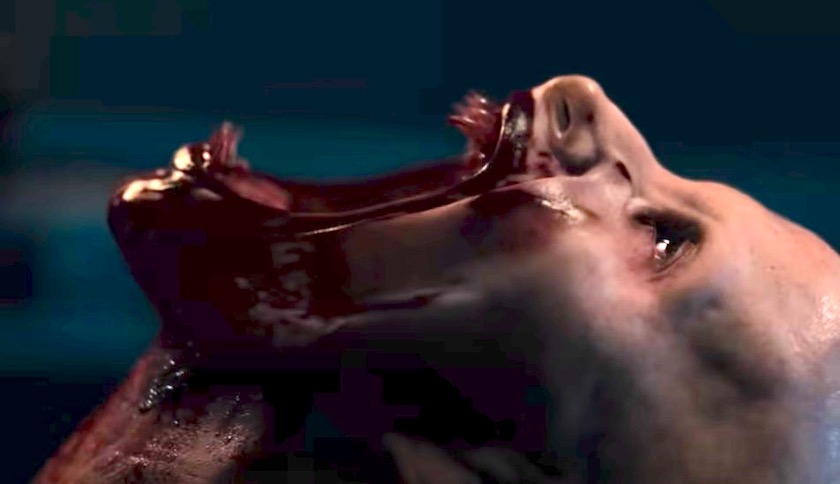 Fans of vampire films will find plenty to delight them in Netflix’ latest horror, although some might complain the in-film mythology doesn’t go far enough. There’s just enough backstory to make the main characters’ journeys interesting more than a purely horror-arc might give us, and the addition of plane hijacking tropes only intrigues more and more. The unique premise doesn’t offer new ideas on either vampire lore or terrorist tropes, but it does collide them together with a skilful exuberance and playful torturing of the viewer into trying to guess who’s the more horrifying; the vampire or the humans she hunts? Blood Red Sky is certainly recommended for fans of either genre because there’s plenty here to go around. A solid little B-movie that delivers all the escapist horror expectations you could want.

If you’re reading this, you’ve now learned that Rodney loves movies and will continue to write about them until he falls over dead. And even then he’ll have some content scheduled post-mortem.