Princess Irene of Hesse and by Rhine was the third daughter of Princess Alice of the United Kingdom, and Grand Duke Ludwig IV of Hesse and by Rhine. She is often overlooked, as history tends to focus on two of her sisters – Ella and Alix – who both married into the Russian Imperial Family and tragically lost their lives at the hands of the Bolsheviks in 1918. Irene’s obscurity would likely be satisfying to the Princess, who much preferred living her life out of the spotlight. She was born Princess Irene Luise Maria Anna on July 11, 1866, at the New Palace in Darmstadt, Grand Duchy of Hesse and by Rhine, now in Hesse, Germany and had six siblings:

Irene was just 12 years old in 1878 when her mother died, following an outbreak of diphtheria in the family which also took the life of her youngest sister, May. Much of the next years were spent, along with her sisters, under the supervision of their grandmother, Queen Victoria. The Queen had taken a particular interest in the children following Alice’s death, overseeing almost every aspect of their lives. Soon, following the marriages of her two elder sisters in 1884, Irene became the eldest daughter living at home, and thus became her father’s companion and often served as hostess for his official events.

On May 24, 1888, in the chapel of Charlottenburg Palace in Berlin, Kingdom of Prussia, now in the German state of Brandenburg, Irene married her first cousin, Prince Heinrich of Prussia. He was the second son of Friedrich III, German Emperor and King of Prussia, and Victoria, Princess Royal of the United Kingdom. Like her own mother, Irene was a carrier of hemophilia and passed it to two of her sons. They were two of the nine descendants of Queen Victoria who suffered from the disease. (Read more here — Unofficial Royalty: Hemophilia in Queen Victoria’s Descendants) 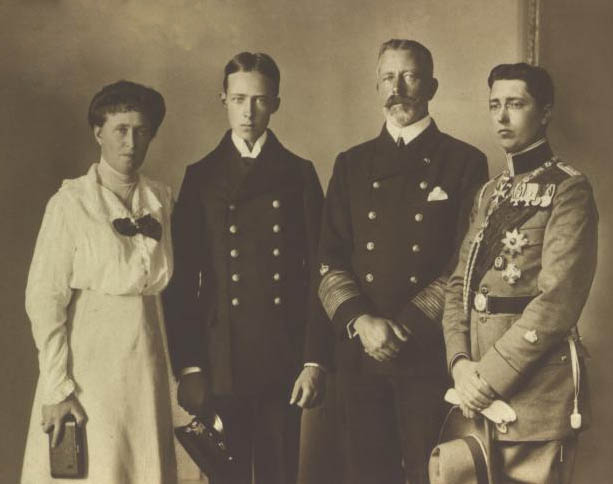 Irene and her husband gained the nickname “The Very Amiables” because of their quiet, unassuming manner. Perfectly happy to stay home and enjoy their family, they were the least royal of the Prussian royals of the time. Heinrich’s primary focus was his military career, and Irene’s was raising her family. In 1894, they bought Hemmelmark, an estate in Eckernförde, in Schleswig-Holstein, KIngdom of Prussia, now in Germany, as it was close to Heinrich’s military base in Kiel. Hemmelmark would become the family’s primary home, with occasional stays in Potsdam and Berlin when royal duty called.

Irene remained very close to her siblings. She and her sister Victoria often traveled to Russia to visit Ella and Alix, and back to Darmstadt to visit their brother Ernie. The families would all gather for vacations in Hesse, often staying at Schloss Wolfsgarten. The above photo shows the siblings with their spouses, gathered in Darmstadt in 1903 for the wedding of Princess Alice of Battenberg. L-R: Ernie, Alix, Nicholas II, Irene, Heinrich, Ella, Serge, Victoria, and Louis.

Irene and her sisters were separated during World War I, with the others being on opposite sides and, for the most part, unable to communicate with each other. It would not be until the end of the war that Irene would learn of the murders of her sisters Ella and Alix, as well as Alix’s whole family. Meanwhile, in Prussia, her brother-in-law (and first cousin) Kaiser Wilhelm II, was forced to abdicate, bringing an end to the Prussian monarchy. While he was banished from the country, Irene and Heinrich were able to remain and lived the remainder of their days at Hemmelmark.

In 1920, Irene met with Anna Anderson, the woman who claimed to be her niece, Grand Duchess Anastasia. Although Irene surely held hope that one of her nieces had survived the family’s execution, she quickly found Anderson to be a fake. It was a subject that caused great stress to Irene, with her husband banning Anderson’s name from being brought up in his wife’s presence. Some years later, Irene’s son would pose some questions to Anderson about their childhood and found that Anderson answered them all to his satisfaction. Many years later, Anderson’s claim was proven false thanks to DNA evidence.

Following her husband’s death in 1929, Irene continued to live at Hemmelmark. More losses would come in the following years. Her brother Ernie died in 1937, followed just weeks later by the horrific plane crash which took the lives of Ernie’s widow, his elder son, daughter-in-law, and grandsons. Then, World War II broke out, once again separating Irene from her only remaining sibling, her sister Victoria.

Following the war, and her sister’s death in 1950, Irene spent her remaining years quietly, often in the company of her granddaughter Princess Barbara of Prussia. On November 11, 1953, Princess Irene passed away at Hemmelmark with Barbara by her side. She was buried beside her husband and youngest son in the chapel on the grounds of Hemmelmark.