You have reached the cached page for https://nypost.com/2019/03/09/bad-moms-let-loose-in-raunchy-facebook-groups/
Below is a snapshot of the Web page as it appeared on 1/16/2021 (the last time our crawler visited it). This is the version of the page that was used for ranking your search results. The page may have changed since we last cached it. To see what might have changed (without the highlights), go to the current page.
You searched for: +Bad Moms We have highlighted matching words that appear in the page below.
Bing is not responsible for the content of this page.
'Bad Moms' let loose in raunchy Facebook groups Skip to main content 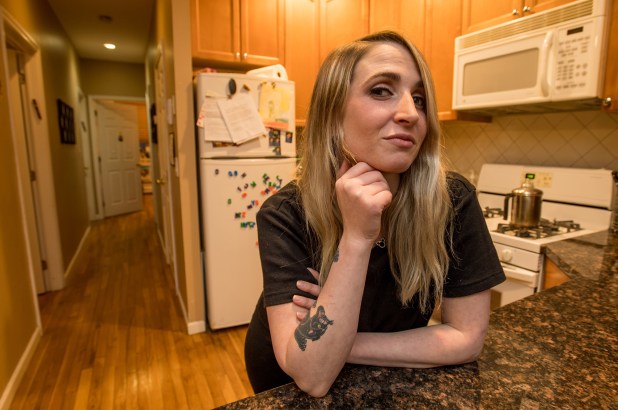 There’s no filter on this social media platform.

Women are spilling all in new “Bad Moms” Facebook groups where the conversations sound more like locker-room talk than school drop-off chatter.

“My husband and I just played life without children this morning . . . it was so quiet and full of sex,” a member of “Bad Moms of Long Island” posted on the group’s Facebook page, which has racked up 8,000-plus members since August.

It’s one of at least five local groups to form in the last year, inspired by the 2016 Mila Kunis comedy “Bad Moms,” in which a group of fed-up mothers form a hard-partying clique to escape side-eye from pretentious, type-A stroller-pushers.

In “Bad Moms (uncensored),” a New Jersey woman — whose husband is pictured in her Facebook profile — told more than 6,800 fellow members: “My husband LOVES my boobs and before having the baby he would play with them during sex. BUT I’m breastfeeding still and I think it’s super weird if he plays with them or licks them. Am I just over thinking it?”

The comments poured in.

“My man is a weirdo,” another breastfeeding Bad Mom replied. “He wasn’t bothered by them leaking at all. He thought it was sexy. I’m like, touch them, I’ll kill you.”

Bad moms share a lot more than meat-loaf recipes or the latest Dr. Phil parenting tips. They dish on their sex lives — some even confess to two-timing their husbands — seemingly oblivious to the privacy issues that plague the internet.

“Just got my husband to spend $100 on cheese, cured meats and olives for sex,” a Long Island mom wrote on the group page.

Many use their own Facebook profiles, with their photos and real names, hoping that the private Facebook groups are strictly vetting new members. Even Facebook recognizes its privacy perils — on Wednesday creator Mark Zuckerberg announced the company would start steering users to communicate privately, instead of posting publicly.

Tara Johnson, 46, co-founder of “Bad Moms of Long Island,” said her group requires prospective members to fill out a questionnaire about where they live and if they have kids.

Johnson said she once had to kick out a member who shared a photo of another mom with a separate Facebook group, because it violated the secrecy code. “It’s like Fight Club,” she said.

The groups are multiplying as women seek support sans judgment.

Johnson founded her Long Island group with co-worker Jesse Curatolo, 29, because they were sick of bullying in other mommy groups.

“Every other moms group has been a bad experience,” Johnson said. “Someone corrected my spelling once.”

The “Bad Moms of New York — the uptight need not apply” was launched in January and has 500-plus members, who often riff on their kids.

“I just walked into my 14 yr olds room, farted and shut the door behind me,” one Bad Mom of New York wrote. “Now I hear him yelling and searching for the Febreze.”

“I wanted mothers to know that it’s OK not to be a cookie-cutter mom because motherhood is hard,” Navarez said. “Everyone has their own tactics, and you don’t need to look perfect to get it done.”

In the “Bad Moms of Marlboro,” a New Jersey ground that has gained 1,400 members in four months, members are embracing the tell-all philosophy.

“Just spent $275 at CVS buying holiday cards,” one Marlboro woman wrote. “We get text alerts when our debit cards are used. My husband texts me ‘please tell me you just spent $275 on condoms.”

Build your credit and save money in 2021 with Self Financial