You have reached the cached page for https://www.amazon.com/Bad-Moms-DVD/dp/B01LXXMWHK
Below is a snapshot of the Web page as it appeared on 11/15/2020 (the last time our crawler visited it). This is the version of the page that was used for ranking your search results. The page may have changed since we last cached it. To see what might have changed (without the highlights), go to the current page.
You searched for: +Bad Moms We have highlighted matching words that appear in the page below.
Bing is not responsible for the content of this page.
Amazon.com: Bad Moms [DVD]: Movies & TV 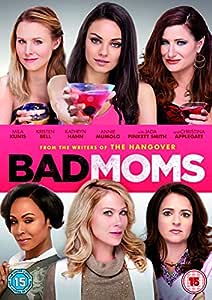 Format: DVD
4.5 out of 5 stars 10,761 ratings
See More
Playback Region 2 :This will not play on most DVD players sold in the U.S., U.S. Territories, Canada, and Bermuda. See other DVD options under “Other Formats & Versions”. Learn more about DVD region specifications here

Jon Lucas and Scott Moore co-write and direct this American comedy starring Mila Kunis, Christina Applegate and Kristen Bell. Amy Mitchell (Kunis) is a 32-year-old, happily married, committed mother-of-two who works as a sales rep for a coffee company. But after finding out her husband is cheating on her, Amy becomes fed up with her stressful life and decides to take action. She quits the PTA in protest of its overbearing leader Gwendolyn (Applegate) and gets together with some of her fellow mothers for a wild and liberating night on the town. Along with town outcast and single mum Carla (Kathryn Hahn) and worn out mother-of-four Kiki (Bell), Amy hits the bars for an all-night bender that allows the trio to let loose in a wild, indulgent trip of liberation before deciding to make some important changes to their lives, including tackling Gwendolyn head-on.

4.5 out of 5 stars
4.5 out of 5
10,761 global ratings
How are ratings calculated?
To calculate the overall star rating and percentage breakdown by star, we don’t use a simple average. Instead, our system considers things like how recent a review is and if the reviewer bought the item on Amazon. It also analyzes reviews to verify trustworthiness.

Rosita
5.0 out of 5 stars Cute and Funny
Reviewed in the United States on August 4, 2018
Verified Purchase
I still can't figure out why the bad reviews keep mentioning the kids and how they were not in a lot of the scenes. Like this one:

"The only scene I enjoyed in this film was the one in which Mila Kunis' character goes to the spa with her daughter. It was a genuine moment between the two, and was equally entertaining and touching. Therin lies the biggest problem with Bad Moms: it too often forgets about the children. When it focuses on the relationships between the struggling mothers and their kids, Bad Moms shines. However, instead it wastes time on partying and petty fighting while the audience is wondering: "who's taking care of the kids?"

This movie was intended to be funny not be heartfelt and touching all the way through. It was not about the children as much as it was about moms being "bad moms" having a good time with friends and taking a break from such a tedious life running errands, working and tending to their children. It didn't waste time on partying or petty fighting and no one (except someone without a sense of humor) is thinking about "who is taking care of the kids?"

Laugh a little and get over it.
Read more
25 people found this helpful
Helpful
Comment Report abuse

notasushifan
5.0 out of 5 stars Extremely funny! Don't listen to the bad reviews!
Reviewed in the United States on November 9, 2017
Verified Purchase
I'm surprised to see so many bad reviews! This movie is absolutely HILARIOUS! I'm not a mom, but if you are a mom, I'm sure you'll laugh even harder than I did. I think some people are too serious nowadays and movies like this aren't funny to them. Mila Kunis did a great job in this movie as being an over-worked and under appreciated mom and she changed her routine and it brought success! This movie IS worth your time. Just watch it and enjoy!
Read more
15 people found this helpful
Helpful
Comment Report abuse

TJsGirl
1.0 out of 5 stars You'll be dumber for wasting the time
Reviewed in the United States on January 4, 2019
Verified Purchase
Didn't expect prude but didn't expect such vulgarity. And I mean embarrassing to my intellect trash. These women are funny and could have delivered without speaking like hardened imprisoned gang bangers. Yes that offensive. Bikers and sailors would blush. What happened to clever writing and timed delivery?
Read more
9 people found this helpful
Helpful
Comment Report abuse

J S.
4.0 out of 5 stars Surprisingly good. Fun and funny!
Reviewed in the United States on August 28, 2018
Verified Purchase
I would give it 5 stars but there were so many gratuitous F-bombs that it felt a bit like a carpet bombing. This movie demonstrates how a very simple premise can be made to work. Great casting, very good script and decent pacing are the keys. So many projects like this just turn out to be merely dumb, or brutishly crafted. This move definitely does not take itself too seriously. Mila Kunis is gorgeous and convincing and lovable in this movie. Her movie daughter gives a great turn as an angst-ridden soccer player that just needs her mom to get out of her way. The millennial workplace is a good counterpoint to the childish behavior these moms exhibit, while somehow also showing Mila's character's maturity.
The dad is a total buffoon. He is an absolute caricature of a loser dad, but it works. The power of the PTA is so stupid that you just have to let it go. Its over the top, just like the tall, hunky soccer coach that feels emasculated by the PTA Nazi. Just let it go. And laugh. And enjoy.
This is one of the rare gimmick-comedy movies that I will willingly watch again.
Read more
8 people found this helpful
Helpful
Comment Report abuse

HindSight
1.0 out of 5 stars Crass 'n' Crude
Reviewed in the United States on February 10, 2017
Verified Purchase
If you're idea of a good movie is crass and crude, then you'll love this one. However, if you're looking for something with substance and character, don't bother.
Read more

Colonel DTop Contributor: Star Wars
VINE VOICE
3.0 out of 5 stars The name says it all
Reviewed in the United States on February 16, 2019
Verified Purchase
This film continues the current trend of raunchy comedies where even women get to behave scandalously. I've liked Kristen Bell since her days on "Veronica Mars" but am disappointed that many of her acting choices since then have been in dubious fare like this (talking about "House of Lies" not "The Good Place"). So, up front if you're offended by nudity (minimal), detailed dialog about sex, and alcohol abuse then you should skip "Bad Moms". Not kid friendly that's for sure.

We meet harried and underappreciated mom, Amy (Mila Kunis) as she fights a losing battle juggling too many commitments to her two kids, lazy hubby, dopey boss, and judgment Alpha-mom's on the PTA board. Reaching a breaking point she allies herself with Kiki (Bell) and Carla (Kathryn Hahn) in taking some much needed "me" time and essentially going wild. There are plenty of laughs if you like sophomoric humor and in real life these women would likely find themselves arrested but hey, it's a movie. Say what you want but it spawned a sequel ("A Bad Mom's Christmas") and there are internet rumors of a third so somebody likes these ribald comedies. Definitely pass if profanity laced dialog is not your thing.
Read more
One person found this helpful
Helpful
Comment Report abuse
See all reviews

Tawny
5.0 out of 5 stars Great humour, good gift for parents
Reviewed in the United Kingdom on October 27, 2017
Verified Purchase
I really enjoyed this film. I found the humour really spot on for me, and the main actress is a favourite of mine so I thought it was great. I bought this for my sister as a gift as she's always trying to be the perfect mum, she said she enjoyed it!
Read more
2 people found this helpful
Report abuse

Nicola
5.0 out of 5 stars Laugh out loud and a little outrageous
Reviewed in the United Kingdom on September 10, 2018
Verified Purchase
I really enjoyed this film, it's an easy funny film to watch and serves as a good pick me up. It had me giggling out loud and I'm sure there are some mums out there that could relate to some of the characters and scenarios in the movie (me included!).
Read more
Report abuse

HJ23
5.0 out of 5 stars Watch again and again
Reviewed in the United Kingdom on May 17, 2020
Verified Purchase
I don't think I could ever get bored of this film. Just decided to give it a go and couldn't stop watching it! One of my all time favourites.
Read more
Report abuse

A Jones
1.0 out of 5 stars Don't bother if you are a man.
Reviewed in the United Kingdom on September 23, 2018
Verified Purchase
This movie is for women only, I made a mistake thinking it was a comedy generally speaking; it's not for a man.
Read more
One person found this helpful
Report abuse
See all reviews