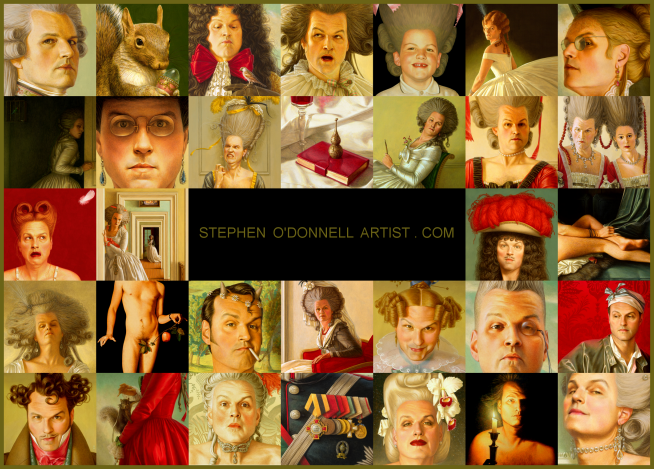 Gathering toward the light - selected work by Anna Ancher 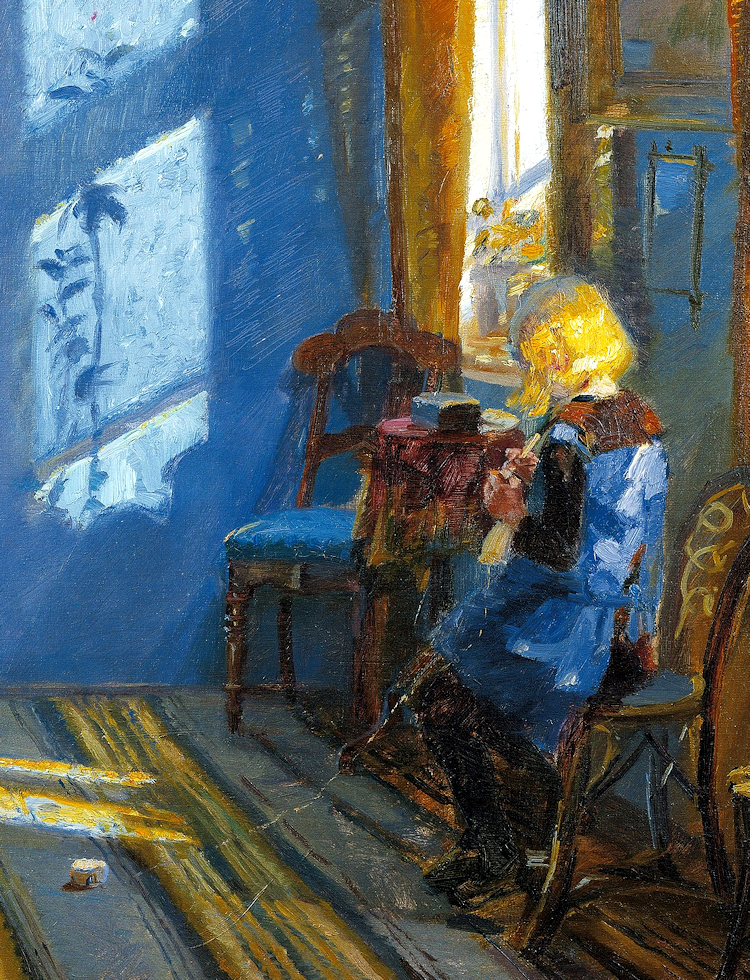 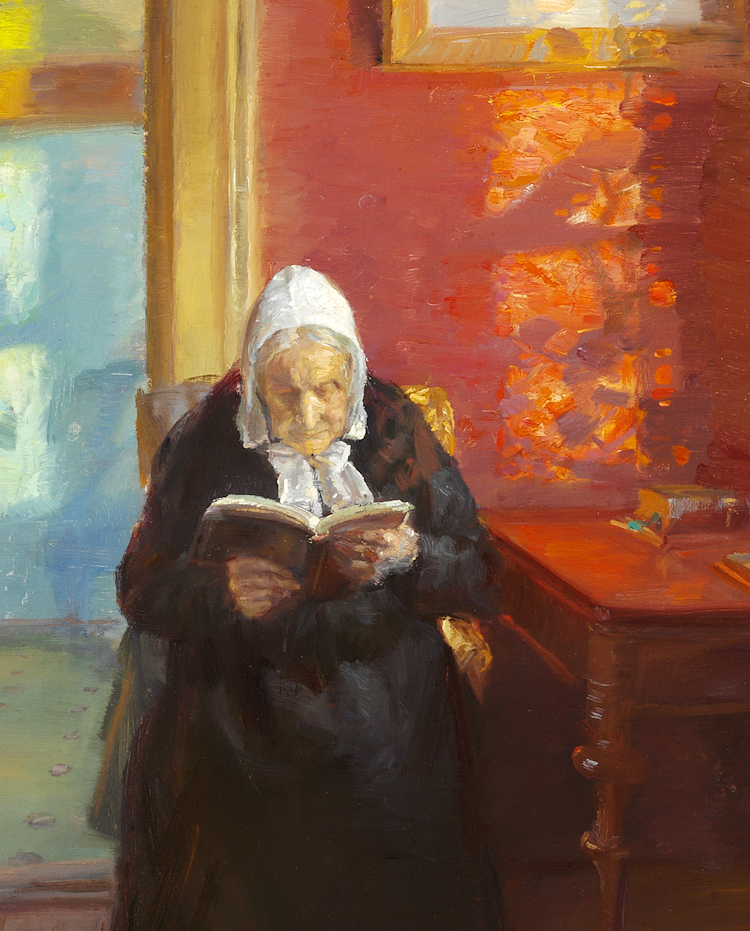 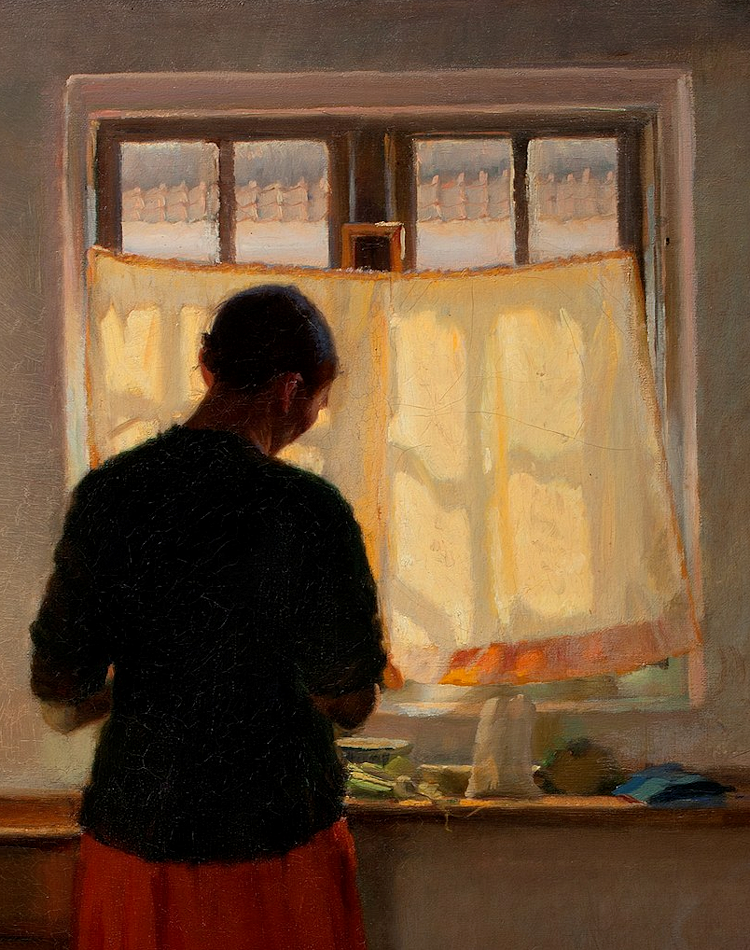 *
Anna Ancher (18 August 1859, Skagen – 15 April 1935, Skagen), Danish artist associated with the Skagen Painters, the celebrated artist colony that gathered on the northern point of Jylland, Denmark. The daughter of a hotel owner, she was the only one of the colony painters who was actually born and grew up in Skagen. Her artistic abilities obvious from an early age, she later studied drawing for three years at the Vilhelm Kyhn College of Painting in Copenhagen. She also studied drawing in Paris at the atelier of Pierre Puvis de Chavannes. In 1880 she married fellow painter Michael Ancher, with whom she had one child, Helga, who later became an artist herself. Despite pressure from contemporary society that married women should solely devote themselves to household concerns, she continued painting after her marriage. Considered one of Denmark's great pictorial artists, she was widely recognized as such even during her lifetime; her work was exhibited at the 1893 World's Columbian Exposition in Chicago, Illinois, and she was awarded the Ingenio et Arti medal in 1913, as well as the Tagea Brandt Rejselegat in 1924. She and her husband purchased a home in Skagen in 1884, and in 1913 added a large studio annex to the property. Upon their daughter's death in 1964, the house and all of its contents were left to a foundation, and the residence was restored and opened as a museum. The Anchers Hus still contains the family's original furniture, as well as paintings created by the Anchers and other Skagen artists.

*
And finally, though it certainly doesn't fit with the theme of this post, I had to include this, Ancher's remarkable, truly profound portrayal of grief.

*
Hervé Guibert (14 December 1955, Saint-Cloud - 27 December 1991, Clamart), French writer and photographer. The author of more than thirty novels and autobiographical studies, he played a considerable role in changing French public attitudes to HIV/AIDS. From a middle-class family, by 1978 he was working for Le Monde and had published his second book; he was not yet twenty-three. In 1984, he shared a best screenplay César with Patrice Chéreau for Chéreau's L'homme blessé. (Coincidentally, one of my favorite twisted and dark - very dark - French films.) Diagnosed with AIDS in 1988, two years later he publicly revealed his HIV status in a roman à clef entitled À l'ami qui ne m'a pas sauvé la vie ("To the friend who did not save my life".) Upon its publication, he immediately found himself the focus of media attention, featured in newspapers and appearing on television talk shows. He continued to publish, including two more books which also detailed the progression of his illness. But two years later, by then almost blind from CMV, he attempted to end his life with an overdose of sleeping pills, one day before his thirty-sixth birthday; he survived, but died two weeks later.
(Ironically, for a time in the 1980s, Guibert was a reader at the institute for the young blind in Paris, Institut National des Jeunes Aveugles, an experience which informed his 1985 novel Des aveugles, published in English as Blindsight.)
Posted by Stephilius at 7:00 AM No comments:

The wages of vengeance - Trittico della Vendetta, a triptych by Francesco Hayez, circa 1847-1853

The Trittico della Vendetta (the Revenge Triptych) is a series of mid-nineteenth-century paintings by Francesco Hayez, the three vignettes centering on a woman named Maria and her revenge upon the lover who has betrayed her. Consiglio alla vendetta (Vengeance is Sworn) was painted in 1851. It was the second work to be produced, but shows the first episode in the story. Now in the Liechtenstein Museum in Vienna, it shows Maria's friend Rachel advising her to use political denunciation to wreak vengeance upon her lover. 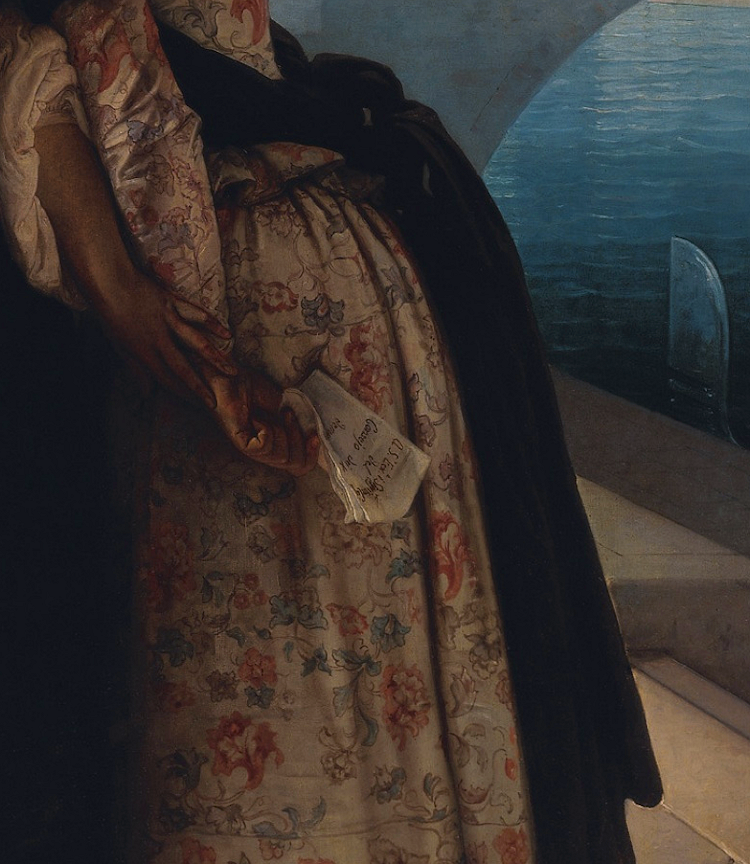 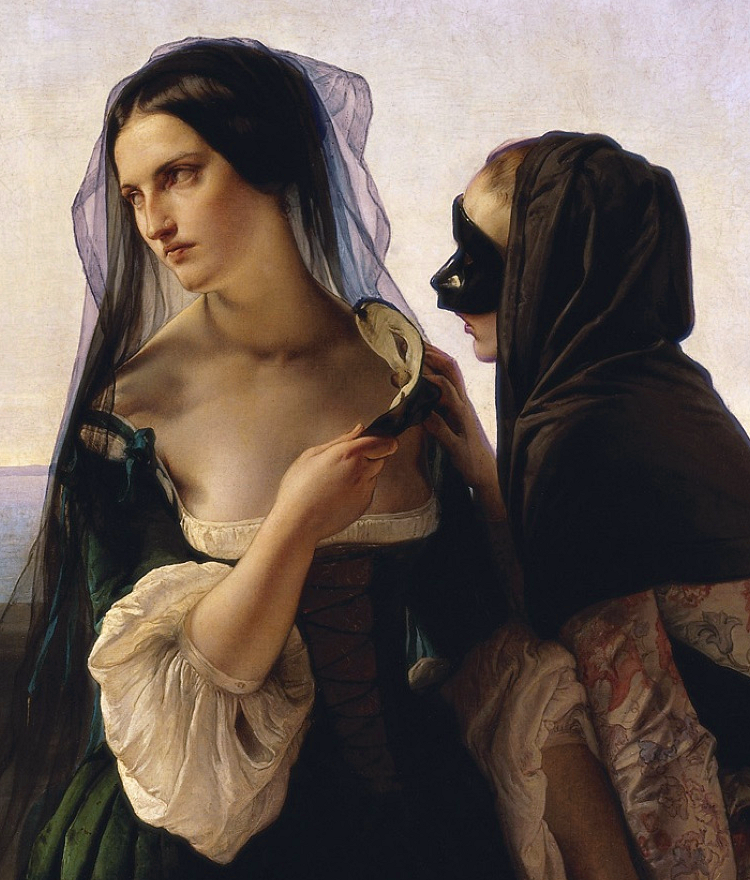 Accusa segreta (Secret Accusation) was painted in 1847-48, and was therefore the first of the three to be completed, though it illustrates the second episode. It is now resides in the collection of the Musei Civici di Pavia. It shows Maria posting the letter, anonymously denouncing her lover. 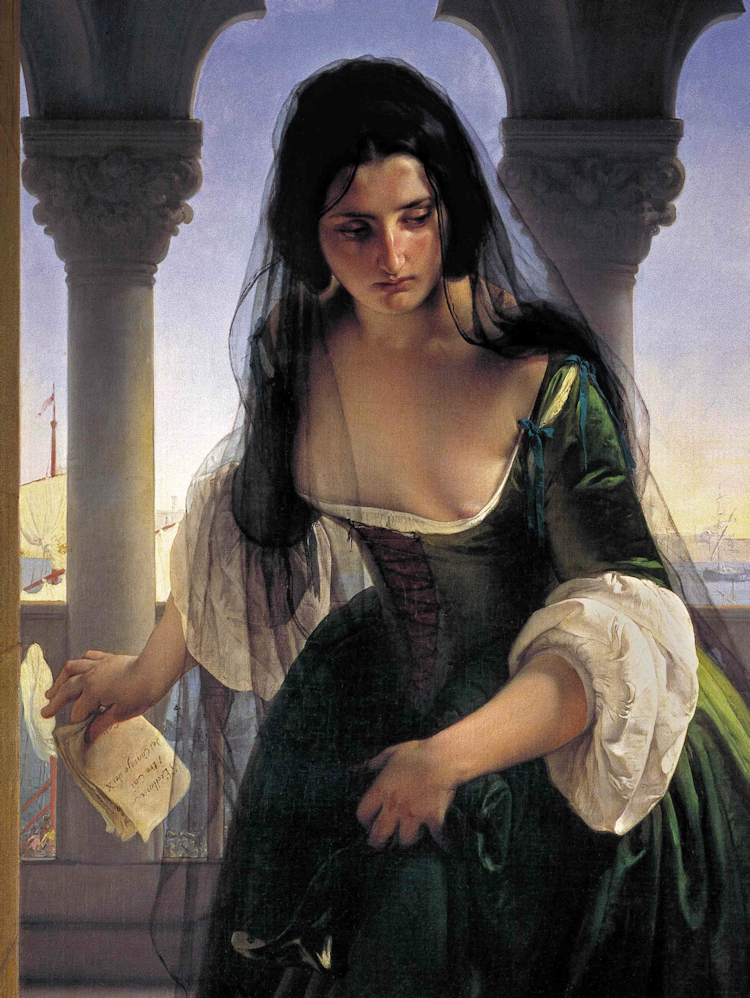 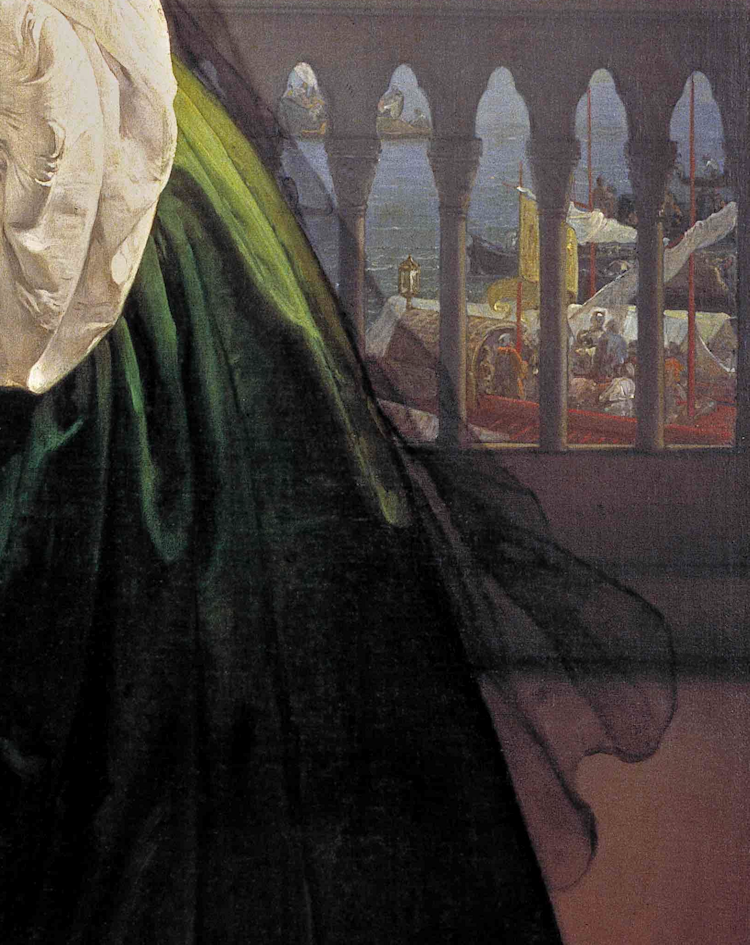 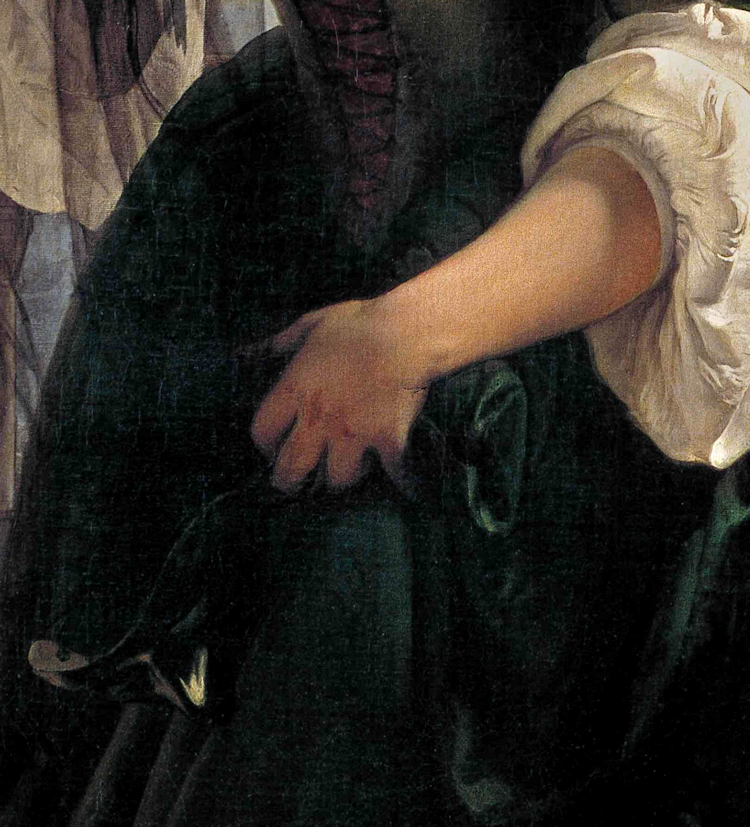 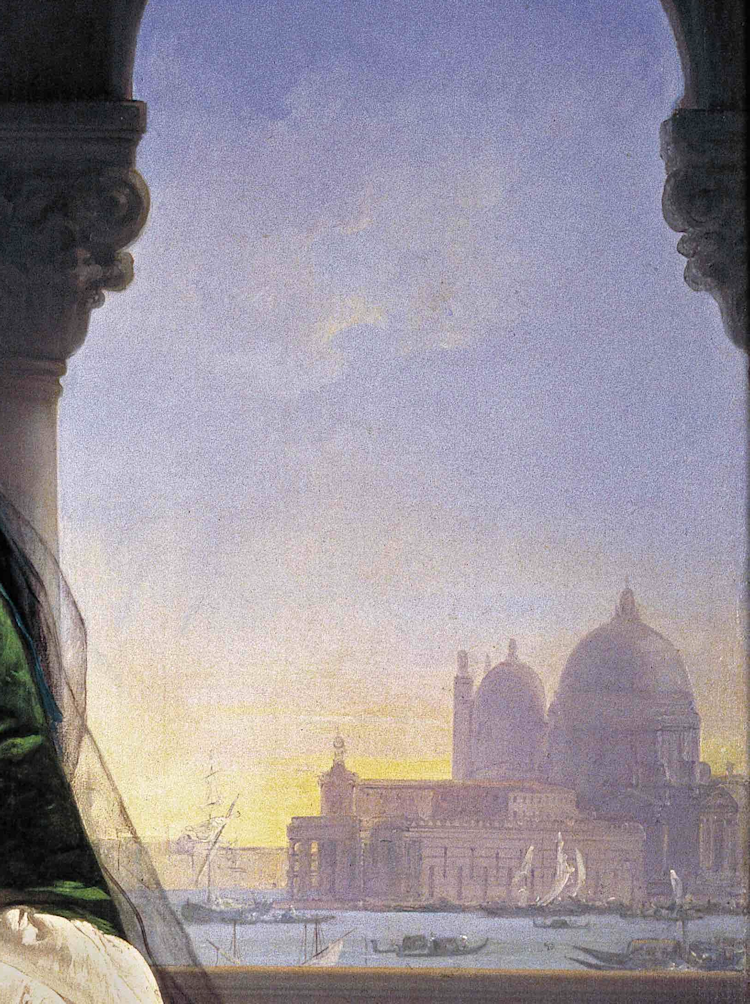 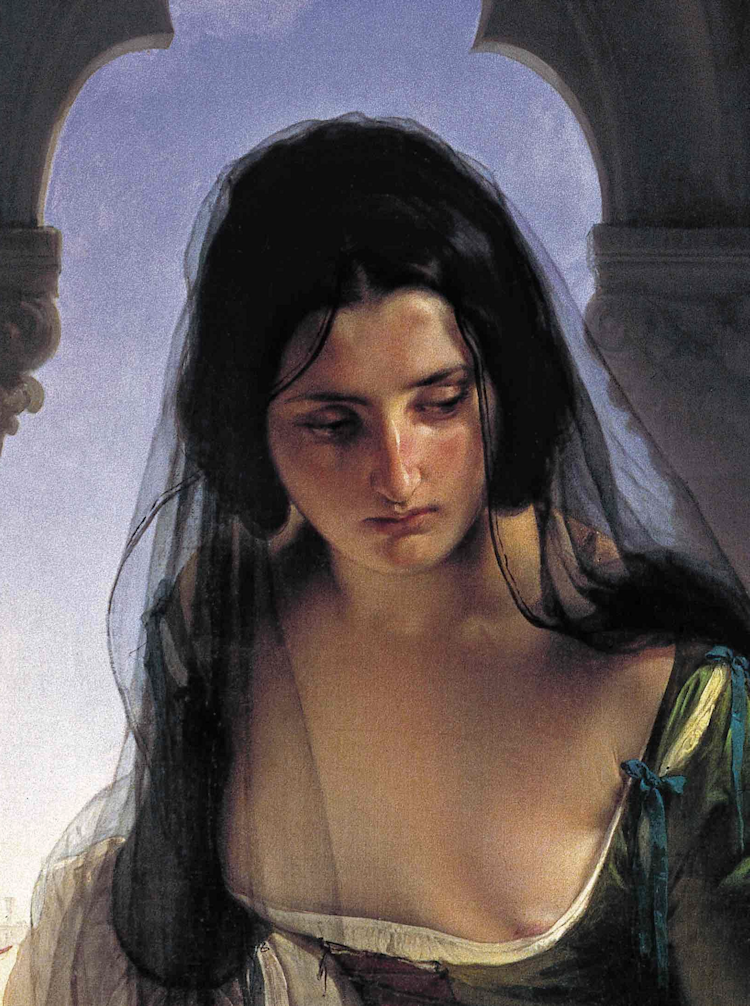 La vendetta di una rivale or Le veneziane (The Revenge of a Rival or The Venetian Woman) dates from circa 1853. It shows the third episode, Maria repenting of her actions and trying to stop her denunciation from being delivered. Sadly, the present location of the original is unknown, though a copy now in the Villa Carlotta was probably made after the its success at the Brera exhibition of 1853. The composition of the third episode was replicated in a bronze bas-relief for the base of Francesco Barzaghi's 1890 monument to Hayez in the Piazzetta di Brera in Milan. 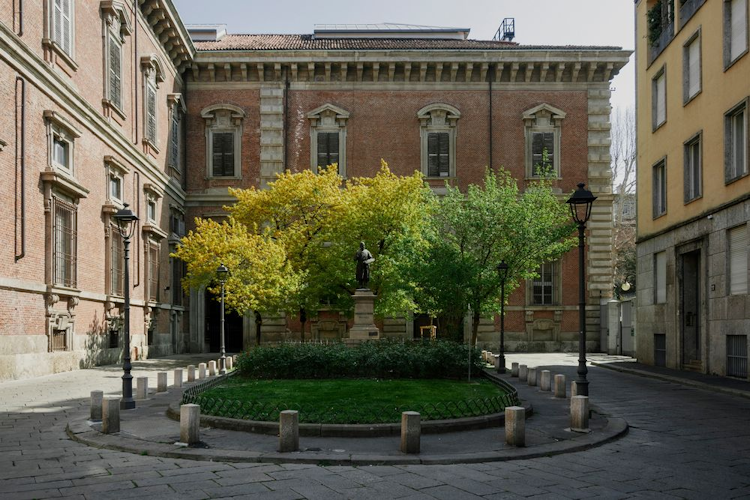 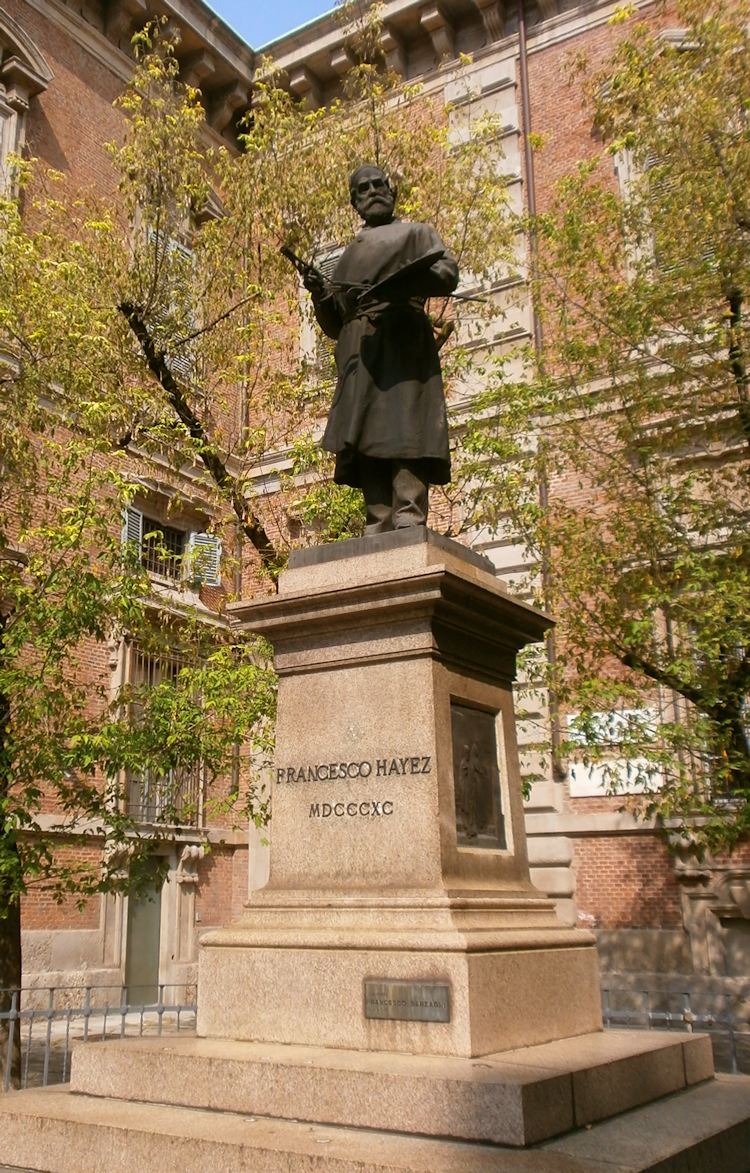 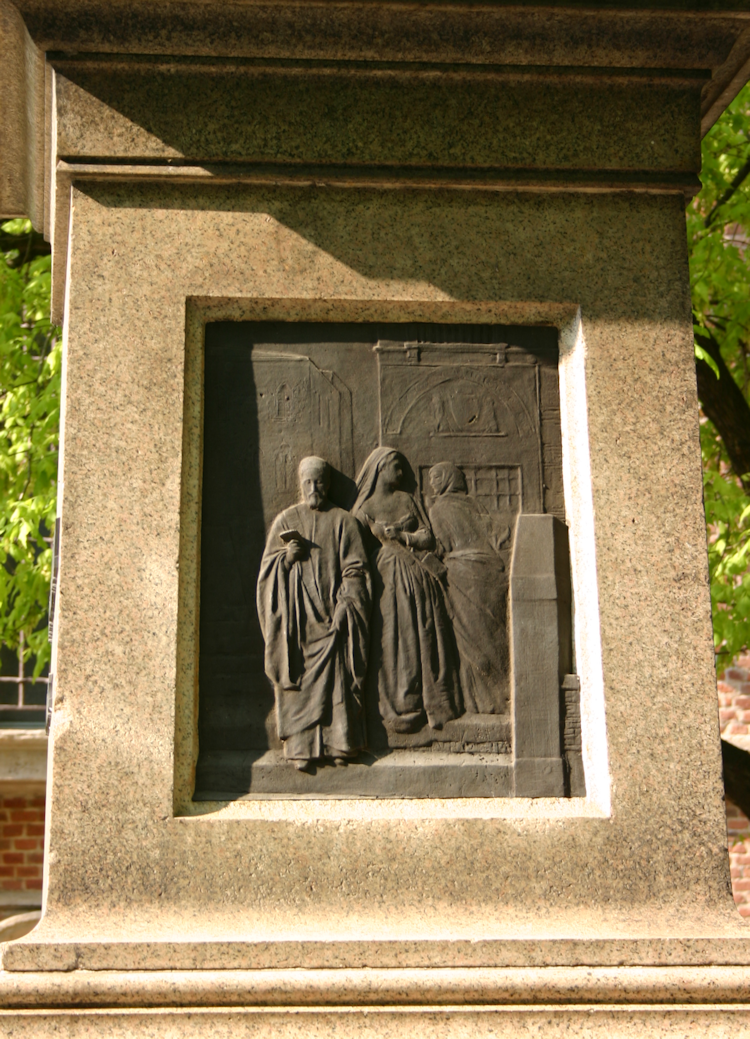 Considering the face of Apollo - preparatory sketch for a mural by Pascal-Adolphe-Jean Dagnan-Bouveret, 1901 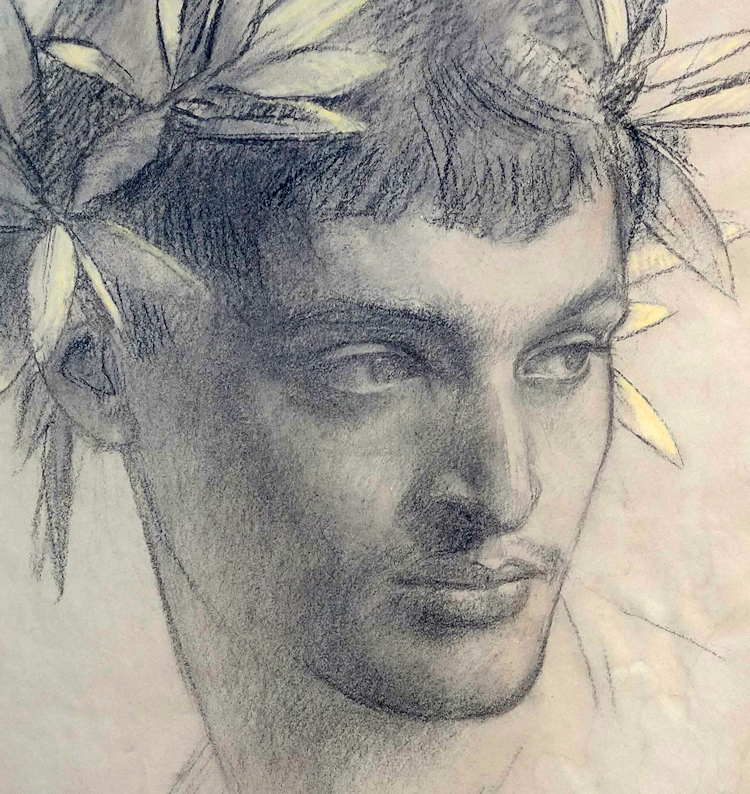 This is a sketch for the face of Apollo in Dagnan-Bouveret's Apollon et les Muses au sommet du Parnasse (Apollo and the Muses at the top of Parnassus), a vast mural - a toile marouflée, actually: oil on canvas glued to the wall - which was completed in 1903 for the Amphithéâtre Richelieu of the Sorbonne.
In looking for information on this piece, I also stumbled across another of Dagnan-Bouveret's preparatory studies of Apollo, the figure rather than the face. 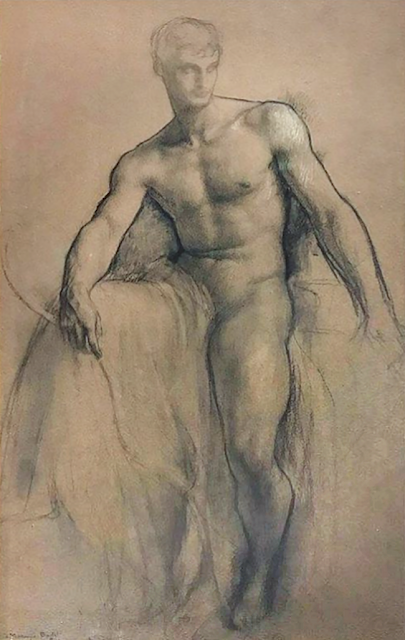 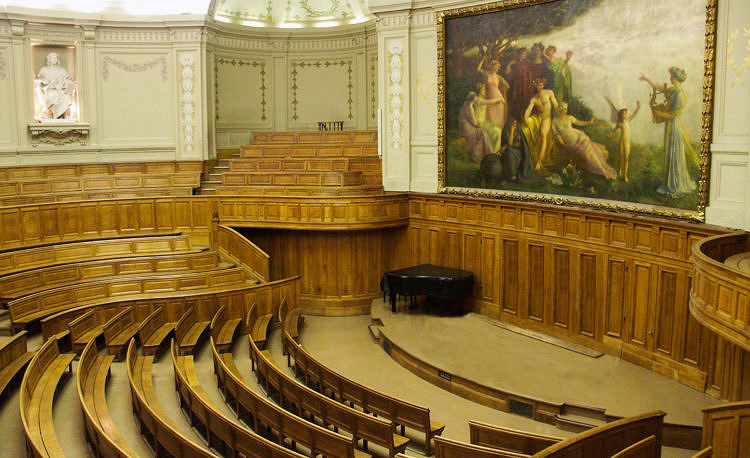 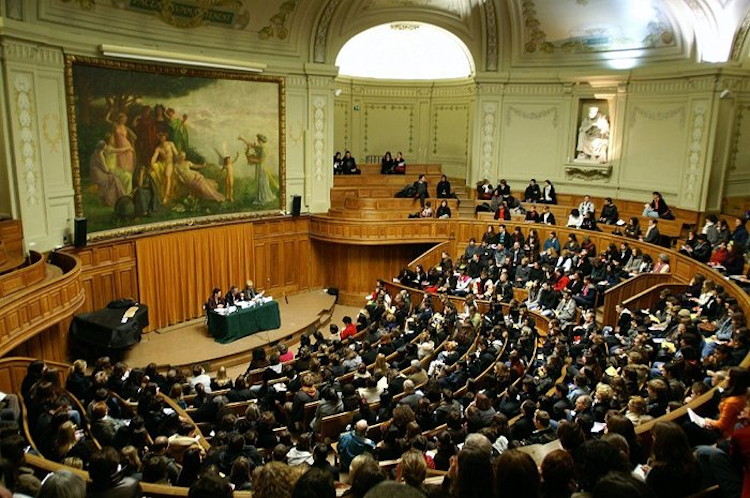 *
As an example of just how confounding the internet can sometimes be, I found these three very different versions of the drawing. All are still clearly the original work, but which is closest to reality? I guess I'll never know for certain. So for my own "edition" I tried to come down somewhere in the middle. 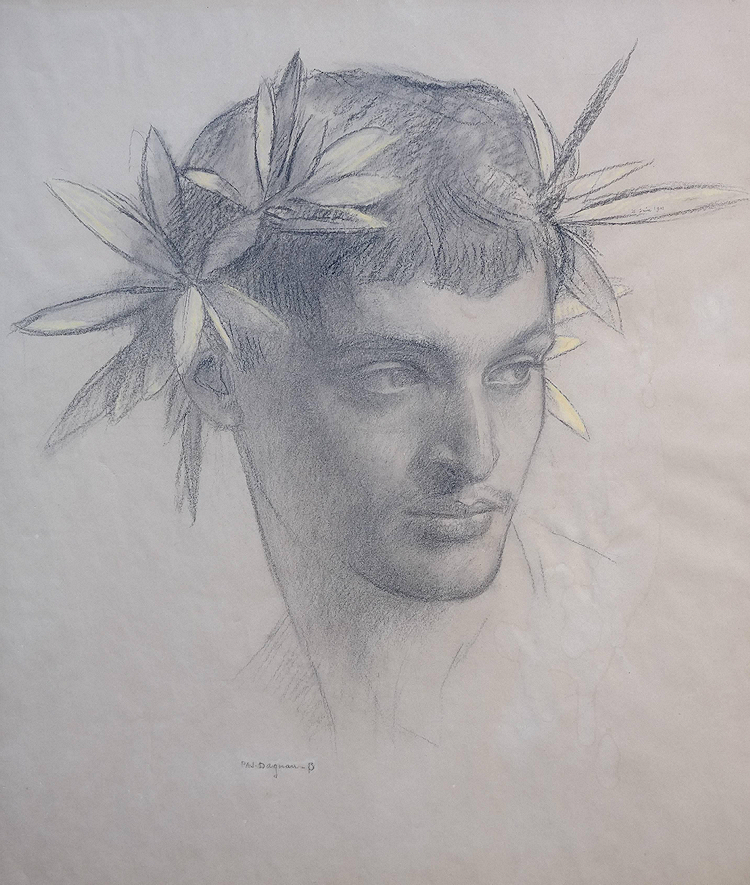 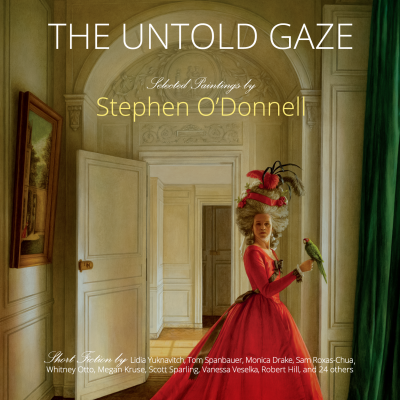 The UNTOLD GAZE is a large format fine art book - 11x11 inches hardbound, 160 pages, full color - a collection of almost ninety of Stephen's paintings paired with short fiction and poetry inspired by his work. Included among the thirty-three authors are Lidia Yuknavitch, Tom Spanbauer, Monica Drake, Sam Roxas-Chua, and Whitney Otto. Click on the image above if you'd like more information on how to purchase the book.

Stephilius
Stephen O’Donnell is a mid-career fine artist, writer, and singer/performer. His paintings are widely collected, both in this country and abroad. Entirely self-taught, he is best known for his self-portraits, paintings which typically employ gender ambiguity and a lot of droll humor. His work most often exemplifies what is known as a portrait historié, in which a recognizable subject is portrayed in period costume or mythological guise, to dramatic or comic effect. He is also known for his small paintings of animals. His work – both literary and visual – has appeared in the literary magazines/journals Nailed, Menacing Hedge, and Gertrude. He is married to writer and graphic designer Gigi Little, with whom he sometimes performs. Their book, The Untold Gaze – a collection of Stephen’s paintings paired with short fiction by 33 authors – was published in October of 2018. They live in Portland, Oregon with their dog Nicholas.