After his first Cabinet meeting as PM: “An extraordinary affair. I gave them their orders and they wanted to stay and discuss them.” 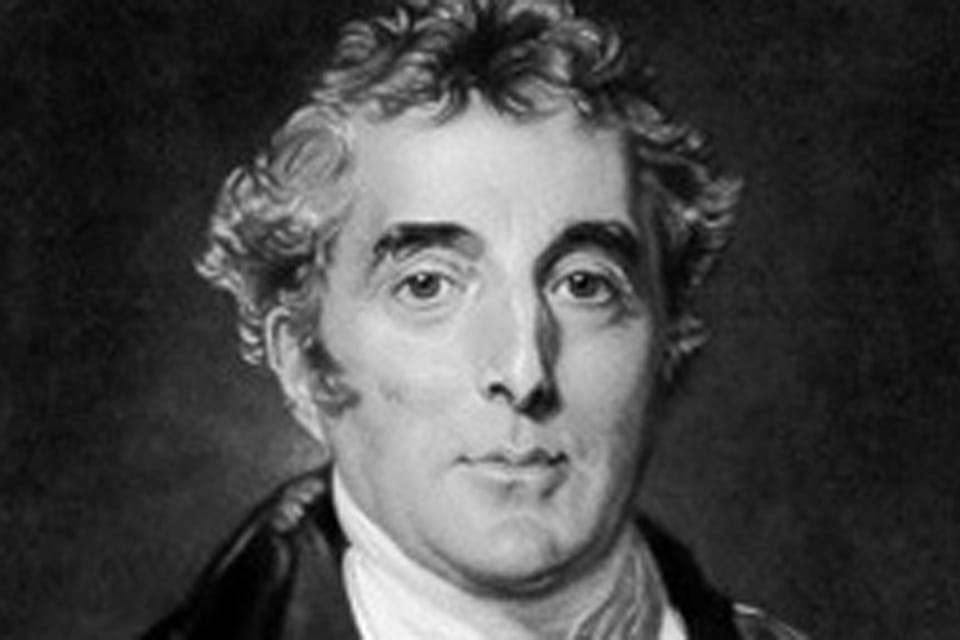 He is famous for his major role in the Napoleonic wars. Wellington boots are named after him.

Arthur Wellesley 1st Duke of Wellington is today more famous as a soldier than as a politician. In fact, as the Prime Minister, he was known for his measures to repress reform, and his popularity sank a little during his time in office.

The Duke of Wellington was born in Dublin to the Earl and Countess of Mornington.

Fatherless at an early age, and neglected by his mother, he was a reserved, withdrawn child. He failed to shine at Eton, and instead attended private classes in Brussels, followed by a military school in Angers.

Ironically, the young duke had no desire for a military career. Instead he wished to pursue his love of music. Following his mother’s wishes, however, he joined a Highland regiment.

He fought at Flanders in 1794, and directed the campaign in India in 1796, where his elder brother was Governor General. Knighted for his efforts, he returned to England in 1805.

In 1806 he was elected Member of Parliament for Rye, and within a year he was appointed Chief Secretary of Ireland by the Duke of Portland. He continued with his military career despite his parliamentary duties, fighting campaigns in Portugal and France, and being made commander of the British Army in the Peninsular War.

He was given the title Duke of Wellington in 1814, and went on to command his most celebrated campaigns in the Napoleonic Wars, with final victory at Waterloo in 1815. When he returned to Britain he was treated as a hero, formally honoured, and presented with both an estate in Hampshire and a fortune of £400,000.

After the Battle of Waterloo, he became Commander in Chief of the army in occupied France until November 1818. He then returned to England and Parliament, and joined Lord Liverpool’s government in 1819 as Master General of the Ordnance. He undertook a number of diplomatic visits overseas, including a trip to Russia.

In 1828, after twice being overlooked in favour of Canning and Goderich, the Duke of Wellington was finally invited by King George IV to form his own government and set about forming his Cabinet.

As Prime Minister, he was very conservative; known for his measures to repress reform, his popularity sank a little during his time in office. Yet one of his first achievements was overseeing Catholic emancipation in 1829, the granting of almost full civil rights to Catholics in the United Kingdom.

Feelings ran very high on the issue. The duke persuaded the King only by his threat of resignation. Lord Winchilsea, an opponent of the bill, claimed that by granting freedoms to Catholics Wellington “treacherously plotted the destruction of the Protestant constitution”.

As a result, he and Winchilsea fought a duel in Battersea Park in March 1829. They deliberately missed each other in firing, and honour was satisfied.

The duke had a much less enlightened position on parliamentary reform. He defended rule by the elite and refused to expand the political franchise.

His fear of mob rule was enhanced by the riots and sabotage that followed rising rural unemployment. His opposition to reform caused his popularity to plummet to such an extent that crowds gathered to throw missiles at his London home.

The government was defeated in the Commons, and the duke resigned, to be replaced by Earl Grey.

He continued to fight reform in opposition, though he finally consented to the Great Reform Bill in 1832.

Two years later he refused a second invitation to form a government, and instead joined Sir Peel’s ministry as Foreign Secretary. He later became Leader of the House of Lords, and upon Sir Peel’s resignation in 1846, retired from politics.

In 1848 he organised a military force to protect London against possible Chartist violence at the large meeting at Kennington Common.

‘The Iron Duke’ died in September 1852 after a series of seizures. After lying in state in London, he was buried in St Paul’s Cathedral, London.

The Wellington Arch still stands in London’s Hyde Park. He also gave his name to the humble Wellington boot.