We've been independently researching and testing products for over 120 years. If you buy through our links, we may earn a commission. Learn more about our review process.

Though The Crown primarily revolves around the life of Queen Elizabeth II, season 3 of the show is also set to shine a light on her sister Princess Margaret (played by Helena Bonham Carter), particularly, the ups and downs of her marriage to Lord Snowdon, a.k.a. Antony Armstrong-Jones (played by Ben Daniels). During the couple's 18-year union, both Antony and Margaret reportedly began seeing other people, which led to their eventual divorce.

From the beginning, Margaret and Antony's relationship was painted as a "rebound." As fans of The Crown season 2 can remember, Margaret initially had her heart set on marrying Captain Peter Townsend. Unfortunately for Margaret and Peter, outside pressure broke the two apart. Peter had been married and divorced, which, at that time, made it impossible for the pair to wed under the rules of the Church of England. Prime Minister Anthony Eden and other British officials told the princess, according to the BBC, that if she insisted on marrying Peter, she would have to renounce her rights of succession. In 1955, Margaret canceled the wedding, claiming that she had "reached this decision entirely alone."

Margaret and Atony in 1960.
Hulton Archive

Little did Margaret know that three years later she would become completely entranced with Antony, a well-liked high-society photographer. Unlike Peter, the royal family approved of Antony.

“They all liked him very much — Tony had great charm, very good manners and he knew exactly how to behave. He felt devotion to the royal family, to the Queen, who he admired immensely. He got on very well with Prince Charles and he adored the Queen Mother."

In 1960, Margaret and Antony tied the knot, making them the first royal wedding to be shown on TV (Town and Country reports that over 300 million watched the ceremony). A year later came their son, David, and three years after that they welcomed their daughter, Sarah.

As explored on The Crown, Margaret and Atony's marriage soon became contentious. Antony had always been obsessed with his career, and when he became an artistic advisor of The Sunday Times, he was forced to travel a lot while on assignments — a situation that encouraged his extramarital flings.

Margaret and Atony in 1966.
George Freston

"Margaret's template of marriage was quite different from Tony's," Anne's book noted. "He had parents who split, while her parents' and sister's marriage were very happy. She expected her husband to be with her more, but one of Tony's strongest motivations was work. He had a workshop in the basement of Kensington Palace, and while she was understanding of his work commitments, Margaret didn't realize it would take him away from her so much."

Infidelity became a huge problem. Antony had an affair with his best friend Jeremy's wife, Camilla Fry, and wound up getting her pregnant. Camilla's daughter Polly, who was born three weeks into Margaret and Atony's honeymoon, grew up thinking that Jeremy was her biological father, but a 2004 DNA test confirmed that Antony was actually her father. Toward the end of the 1960s, according to The Evening Standard, Antony also began a romantic fling with Lady Jacqueline Rufus-Issacs. He also got involved with Lucy Hogg, who he eventually married in 1978. 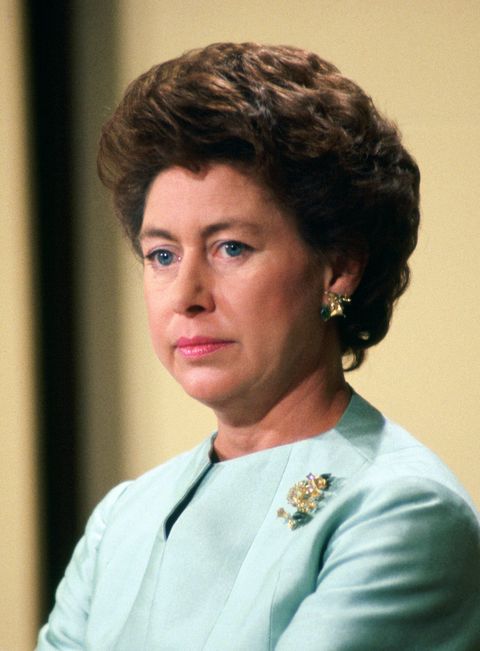 Margaret on the day of her divorce from Atony in 1978.
Tim Graham

Antony wasn't the only one. Margaret was reportedly also romantically intertwined with her husband's friend Anthony Barton and a nightclub pianist Robin Douglas-Home. But what caught the most media attention at the time was Margaret's fling with Roddy Llewellyn, who was 17 years younger than the princess. The media, at the time, unfairly portrayed Margaret as a cougar and Roddy as a toyboy, reports Harper's Bazaar. The two met in Scotland in 1973 and were seen vacationing together on the island of Mustique in 1976 — the same year Atony and Margaret separated.

After a myriad of adultery on both accounts, Atony and Margaret officially divorced in 1978, though they remained "good friends" for the sake of their children.

Kayla Keegan leads Good Housekeeping’s editorial growth strategies in the partnership, news, social, branded, membership and newsletter spaces. Prior to her new position, she was the Senior News and Entertainment Editor for the brand, covering and editing all things in the entertainment, pop culture and celebrity world for Good Housekeeping. She’s also worked as a social editor for House Beautiful and had previous writing stints at Redbook, Cosmopolitan and Seventeen.

The 60 Rom-Coms You Need to Watch in Your Lifetime

👑 Charles Is Switching Up the Royal Fam's Xmas

Why Shania Twain Posed Nude for Her Latest Album