Russian author
verifiedCite
While every effort has been made to follow citation style rules, there may be some discrepancies. Please refer to the appropriate style manual or other sources if you have any questions.
Select Citation Style
Share
Share to social media
Facebook Twitter
URL
https://www.britannica.com/biography/Anton-Chekhov
Feedback
Thank you for your feedback

Join Britannica's Publishing Partner Program and our community of experts to gain a global audience for your work!
External Websites
Britannica Websites
Articles from Britannica Encyclopedias for elementary and high school students.
print Print
Please select which sections you would like to print:
verifiedCite
While every effort has been made to follow citation style rules, there may be some discrepancies. Please refer to the appropriate style manual or other sources if you have any questions.
Select Citation Style
Share
Share to social media
Facebook Twitter
URL
https://www.britannica.com/biography/Anton-Chekhov
Feedback
Thank you for your feedback 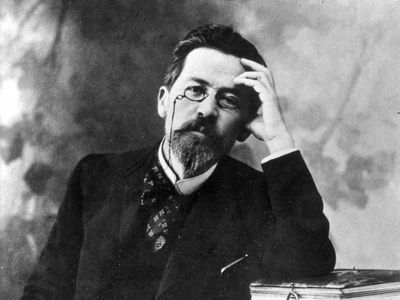 How did Anton Chekhov become famous?

By the time he completed medical school (1884), Chekhov had been writing fiction for several years—mainly anecdotes for humour magazines. His first work in a leading literary review, “Steppe” (1888), depicted a journey in the Ukraine as seen through a child’s eyes. This work, along with the play Ivanov (1887–89), brought Chekhov acclaim.

What was Anton Chekhov’s legacy?

Although Chekhov is best known for his plays, some critics think that his stories are even more creative and significant. Chekhov’s elusive, superficially guileless style of writing—in which what is left unsaid seems much more important than what is said—has defied effective analysis by literary critics and effective imitation by other creative writers.

Why is Anton Chekhov so influential?

Chekhov captured life in the Russia of his time by using a deceptively simple technique devoid of obtrusive literary devices. He is regarded as the outstanding representative of late 19th-century Russian realism. Though already celebrated by the Russian literary public before his death, Chekhov did not become internationally famous until after World War I.

What were Anton Chekhov’s major accomplishments?

Chekhov took his long-winded and ineptly facetious play Wood Demon (1888–89) and converted it—largely by cutting—into Uncle Vanya, one of his greatest stage masterpieces. In another great play, The Cherry Orchard(1904), Chekhov created a poignant picture of Russian landowners in decline, in which characters remain comic despite their very poignancy.

How did Anton Chekhov die?

In March 1897 Chekhov suffered a lung hemorrhage caused by tuberculosis, symptoms of which had appeared considerably earlier. The effects of tuberculosis caused his health to decline over several years, and, some six months after The Cherry Orchard was first performed in Moscow (January 17, 1904), Chekhov died of the disease.

Anton Chekhov, in full Anton Pavlovich Chekhov, (born January 29 [January 17, Old Style], 1860, Taganrog, Russia—died July 14/15 [July 1/2], 1904, Badenweiler, Germany), Russian playwright and master of the modern short story. He was a literary artist of laconic precision who probed below the surface of life, laying bare the secret motives of his characters. Chekhov’s best plays and short stories lack complex plots and neat solutions. Concentrating on apparent trivialities, they create a special kind of atmosphere, sometimes termed haunting or lyrical. Chekhov described the Russian life of his time using a deceptively simple technique devoid of obtrusive literary devices, and he is regarded as the outstanding representative of the late 19th-century Russian realist school.

Chekhov’s father was a struggling grocer and pious martinet who had been born a serf. He compelled his son to serve in his shop, also conscripting him into a church choir, which he himself conducted. Despite the kindness of his mother, childhood remained a painful memory to Chekhov, although it later proved to be a vivid and absorbing experience that he often invoked in his works.

After briefly attending a local school for Greek boys, Chekhov entered the town gimnaziya (high school), where he remained for 10 years. There he received the best standard education then available—thorough but unimaginative and based on the Greek and Latin classics. During his last three years at school Chekhov lived alone and supported himself by coaching younger boys; his father, having gone bankrupt, had moved with the rest of his family to Moscow to make a fresh start.

In the autumn of 1879 Chekhov joined his family in Moscow, which was to be his main base until 1892. He at once enrolled in the university’s medical faculty, graduating in 1884 as a doctor. By that time he was already the economic mainstay of his family, for his father could obtain only poorly paid employment. As unofficial head of the family Anton showed great reserves of responsibility and energy, cheerfully supporting his mother and the younger children through his freelance earnings as a journalist and writer of comic sketches—work that he combined with arduous medical studies and a busy social life.

Chekhov began his writing career as the author of anecdotes for humorous journals, signing his early work pseudonymously. By 1888 he had become widely popular with a “lowbrow” public and had already produced a body of work more voluminous than all his later writings put together. And he had, in the process, turned the short comic sketch of about 1,000 words into a minor art form. He had also experimented in serious writing, providing studies of human misery and despair strangely at variance with the frenzied facetiousness of his comic work. Gradually that serious vein absorbed him and soon predominated over the comic.

Chekhov’s literary progress during his early 20s may be charted by the first appearance of his work in a sequence of publications in the capital, St. Petersburg, each successive vehicle being more serious and respected than its predecessor. Finally, in 1888, Chekhov published his first work in a leading literary review, Severny vestnik (“Northern Herald”). With the work in question—a long story entitled “Steppe”—he at last turned his back on comic fiction. “Steppe,” an autobiographical work describing a journey in Ukraine as seen through the eyes of a child, is the first among more than 50 stories published in a variety of journals and selections between 1888 and his death in 1904. It is on that corpus of later stories, but also on his mature dramas of the same period, that Chekhov’s main reputation rests.

Although the year 1888 first saw Chekhov concentrating almost exclusively on short stories that were serious in conception, humour—now underlying—nearly always remained an important ingredient. There was also a concentration on quality at the expense of quantity, the number of publications dropping suddenly from over a hundred items a year in the peak years 1886 and 1887 to only 10 short stories in 1888. Besides “Steppe,” Chekhov also wrote several profoundly tragic studies at that time, the most notable of which was “A Dreary Story” (1889), a penetrating study into the mind of an elderly and dying professor of medicine. The ingenuity and insight displayed in that tour de force was especially remarkable, coming from an author so young. The play Ivanov (1887–89) culminates in the suicide of a young man nearer to the author’s own age. Together with “A Dreary Story,” that belongs to a group among Chekhov’s works that have been called clinical studies. They explore the experiences of the mentally or physically ill in a spirit that reminds one that the author was himself a qualified—and remained a sporadically practicing—doctor.

By the late 1880s many critics had begun to reprimand Chekhov, now that he was sufficiently well known to attract their attention, for holding no firm political and social views and for failing to endow his works with a sense of direction. Such expectations irked Chekhov, who was unpolitical and philosophically uncommitted. In early 1890 he suddenly sought relief from the irritations of urban intellectual life by undertaking a one-man sociological expedition to a remote island, Sakhalin. Situated nearly 6,000 miles (9,650 km) east of Moscow, on the other side of Siberia, it was notorious as an imperial Russian penal settlement. Chekhov’s journey there was a long and hazardous ordeal by carriage and riverboat. After arriving unscathed, studying local conditions, and conducting a census of the islanders, he returned to publish his findings as a research thesis, which attained an honoured place in the annals of Russian penology: The Island of Sakhalin (1893–94).

Chekhov paid his first visit to western Europe in the company of A.S. Suvorin, a wealthy newspaper proprietor and the publisher of much of Chekhov’s own work. Their long and close friendship caused Chekhov some unpopularity, owing to the politically reactionary character of Suvorin’s newspaper, Novoye vremya (“New Time”). Eventually Chekhov broke with Suvorin over the attitude taken by the paper toward the notorious Alfred Dreyfus affair in France, with Chekhov championing Dreyfus.

During the years just before and after his Sakhalin expedition, Chekhov had continued his experiments as a dramatist. His Wood Demon (1888–89) is a long-winded and ineptly facetious four-act play, which somehow, by a miracle of art, became converted—largely by cutting—into Dyadya Vanya (Uncle Vanya), one of his greatest stage masterpieces. The conversion—to a superb study of aimlessness in a rural manor house—took place some time between 1890 and 1896; the play was published in 1897. Other dramatic efforts of the period include several of the uproarious one-act farces known as vaudevilles: Medved (The Bear), Predlozheniye (The Proposal), Svadba (The Wedding), Yubiley (The Anniversary), and others.