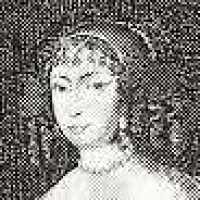 The Life Summary of Anna Eleonore

When Anna Eleonore Hesse-Darmstadt was born on 30 July 1601, in Darmstadt, Starkenburg, Hesse, Germany, her father, Landgraf Louis von Hesse Darmstadt V, was 23 and her mother, Prinzessin Magdelene von Hohenzollern, was 19. She married Georg Duke of von Braunschweig-Lüneburg Herzog, Fürst zu Calenberg on 14 December 1617, in Darmstadt, Hesse, Germany. They were the parents of at least 7 sons and 7 daughters. She died on 6 May 1659, in Schloss Herzberg, Hanover, Prussia, Germany, at the age of 57, and was buried in Hanover, Prussia, Germany.

Put your face in a costume from Anna Eleonore's homelands.

variant of Anne , in common use as a given name in most European languages. Among people with a classical education, it has from time to time been associated with Virgil's Aeneid, where it is borne by the sister of Dido , Queen of Carthage. This Phoenician name may ultimately be of Semitic origin, and thus related to the biblical Anne. However, the connection, if it exists, is indirect rather than direct.

As a nonprofit, we offer free help to those looking to learn the details of their family story.