You have reached the cached page for https://wikimili.com/en/Anna_of_Greater_Poland
Below is a snapshot of the Web page as it appeared on 10/17/2020 (the last time our crawler visited it). This is the version of the page that was used for ranking your search results. The page may have changed since we last cached it. To see what might have changed (without the highlights), go to the current page.
You searched for: +Anna of Greater Poland We have highlighted matching words that appear in the page below.
Bing is not responsible for the content of this page.
Anna of Greater Poland - WikiMili, The Free Encyclopedia

Greater Poland, often known by its Polish name Wielkopolska, is a historical region of west-central Poland. Its chief city is Poznań.

Owińska is a village in the administrative district of Gmina Czerwonak, within Poznań County, Greater Poland Voivodeship, in west-central Poland. It lies approximately 4 kilometres (2 mi) north of Czerwonak and 12 km (7 mi) north of the regional capital Poznań. The village has a population of 2,500.

She was the third daughter (twin with Euphemia) of Przemysł I, Duke of Greater Poland and Poznań, by his wife Elisabeth, daughter of Henry II the Pious, Duke of Wrocław. She named after her maternal grandmother, Anna of Bohemia. 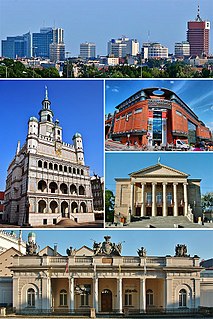 Poznań is a city on the Warta River in west-central Poland, in the Greater Poland region and is the fifth-largest city in Poland. It is best known for its renaissance Old Town and Ostrów Tumski Cathedral. Today, Poznań is an important cultural and business centre and one of Poland's most populous regions with many regional customs such as Saint John's Fair, traditional Saint Martin's croissants and a local dialect.

Elisabeth of Wrocław, also known as Elisabeth of Poland, was a daughter of Henry II the Pious and his wife, Anna of Bohemia. She was a member of the House of Piast and was Duchess consort of Greater Poland by marriage.

Duke Przemysł I died in 1257, leaving four minor daughters and a five months pregnant wife. Anna and her siblings were raised by their mother, and after her death in 1265, their paternal uncle Bolesław the Pious took their guardianship. She was raised in a religious environment, which certainly took a great impact in her life: her mother Elisabeth spent her childhood in the monastery of Trzebnica, where she was strongly influenced by her grandmother, the later St. Hedwig of Andechs; in addition, she grew up in the court of her uncle Duke Bolesław and his wife, Jolenta of Hungary, who are deeply devoted.

Trzebnica is a town in Lower Silesian Voivodeship in south-western Poland. It is the seat of Trzebnica County, and of the smaller administrative district (gmina) called Gmina Trzebnica.

Before 1280 entered in the Cistercian monastery in Owińska as a nun. During the 1290s (certainly before 1298), [1] she served as an abbess in her community.

It's unknown the exact date of Anna's death. Certainly she died after the coronation of his brother Przemysł II as King of Poland on 26 June 1295, because the Obituary of Lubiąż mentions Anna and her sister Eufrozynie as the sisters of the Polish King. Probably the day of her death was on 19 May, because on that day a mass was offered for the repose of her soul in the monastery of Lubiaz. She was buried in the monastery in Owińska. 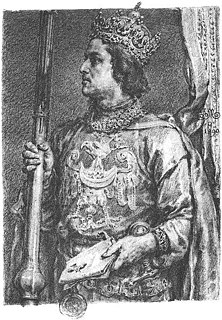 Przemysł II, was the Duke of Poznań from 1257–1279, of Greater Poland from 1279–1296, of Kraków from 1290–1291, and Gdańsk Pomerania (Pomerelia) from 1294–1296, and then King of Poland from 1295 until his death. After a long period of Polish High Dukes and two nominal kings, he was the first to obtain the hereditary title of King, and thus to return Poland to the rank of Kingdom. A member of the Greater Poland branch of the House of Piast as the only son of Duke Przemysł I and the Silesian princess Elisabeth, he was born posthumously; for this reason he was brought up at the court of his uncle Bolesław the Pious and received his own district to rule, the Duchy of Poznań in 1273. Six years later, after the death of his uncle, he also obtained the Duchy of Kalisz.

Władysław I the Elbow-high or the Short was the King of Poland from 1320 to 1333, and duke of several of the provinces and principalities in the preceding years. He was a member of the Piast family of rulers, son of Duke Casimir I of Kujawy, and great-grandson of King Casimir II the Just. He inherited a small portion of his father’s lands, but his dominion grew as some of his brothers died young. He tried for rule of the Duchy of Krakow in 1289, after the death of his half brother Leszek II the Black and the withdrawal from contention of his ally Bolesław II of Masovia, but was unsuccessful. After a period in exile during the rule of Wenceslas II, Władysław rebounded to re-assume some duchies after Wenceslas’ death, and then gained Krakow in 1306 after the murder of Wenceslas III. He temporarily took control of part of Greater Poland after the death of his ally Przemysł II, lost it, and then regained it later on. He conquered Gdansk Pomerania, and left it to familial governors. For defense of this territory he turned to the Teutonic Knights, who then demanded an exorbitant sum or the land itself as an alternative. This led to an extended battle with the Knights, which was not resolved after either a papal trial or Władysław’s own death. Perhaps his greatest achievement was gaining papal permission to be crowned King of Poland in 1320, which occurred for the first time at Wawel Cathedral in Krakow. Władysław died in 1333, and his reign was followed by the rule of his more renowned son, Casimir III the Great. 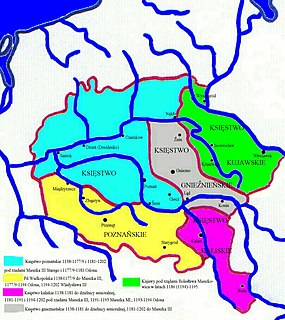 The Duchy of Greater Poland was a historical Polish province established in 1138 according to the Testament of Bolesław III Krzywousty. It existed during the period of fragmentation of Poland until 1320, centered at Poznań, Gniezno and Kalisz in the Greater Poland region.

Zbigniew, was a Prince of Poland during 1102-1107. He was first-born son of Władysław I Herman and probably Przecława, a member of the Prawdzic family.

Richeza of Sweden, was a Swedish princess member of the House of Bjelbo and by marriage Duchess of Greater Poland during 1285-1292 and High Duchess consort of Poland during 1290-1291.

Fenenna of Kuyavia was a Queen of Hungary by marriage to King Andrew III.

Constance of Wrocław was a Princess of Silesia and the Duchess of Kuyavia. She was a member of the Polish House of Piast and mother of Leszek the Black and Ziemomysł of Kuyavia.

Agnes of Poland, was a Polish princess member of the House of Piast and by marriage Princess of Pereyaslavl and Volynia and Grand Princess of Kiev since 1168. 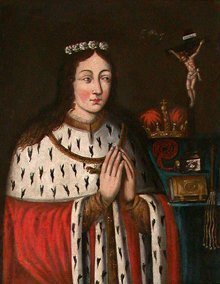 Adelaide of Poland , was a Polish princess and member of the Piast dynasty.

Ludgarda, was a German noblewoman of the House of Mecklenburg, and by marriage Duchess consort of Poznań during 1273-1283 and of all Greater Poland during 1279-1283.