You have reached the cached page for https://worldcometomyhome.blogspot.com/2012/04/0174-lithuania-vilnius-flamboyant-st.html
Below is a snapshot of the Web page as it appeared on 11/25/2020 (the last time our crawler visited it). This is the version of the page that was used for ranking your search results. The page may have changed since we last cached it. To see what might have changed (without the highlights), go to the current page.
You searched for: +Anna, Grand Duchess of Lithuania We have highlighted matching words that appear in the page below.
Bing is not responsible for the content of this page.
WORLD, COME TO MY HOME!: 0174, 0352, 2349 LITHUANIA (Vilnius) - Vilnius Historic Center (UNESCO WHS) 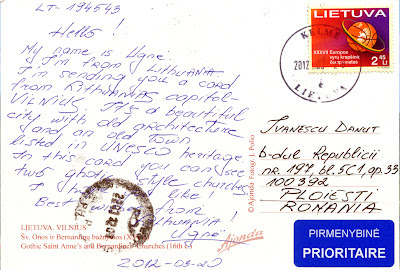 Posted on 17.04.2012, 05.10.2012, 05.03.2016
Raised in the late 13th century around a castle, Vilnius, situated at the confluence of the rivers Neris and Vilnia, became capital of Grand Duchy of Lithuania under Gediminas (r. 1316-1341), and increased in importance along with the expansion of the Duchy, which at its height it covered the territory of modern-day Lithuania, Belarus, Ukraine, and portions of Poland and Russia. After the formation of Polish-Lithuanian Commonwealth (1569), it was one of the state capitals (together with Warsaw), opening its doors to migrants and reaching a real Babylon, where are spoke a variety of languages, from Lithuanian, Polish, Ruthenian, Russian and Old Slavonic, to Latin, German, Yiddish, Hebrew and even Turkic. 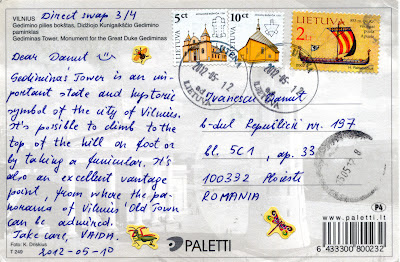 Following centuries proved to be malefic for the city. During the Russo-Polish War (1654–1667), Vilnius was pillaged and burned by Russians, and its population was massacred, during the Great Northern War it was looted by the Swedish, in 1710 the bubonic plague killed about 35,000 residents, and devastating fires occurred repeatedly. In 1795 Vilnius was annexed by the Russian Empire, and in 1812 it was taken by Napoleon, for a short period. The numerous uprisings of the population were harshly suppressed by the Russians, who eventually banned the use of the Polish and Lithuanian languages. Disputed after WWI by Lithuanians, Poles and Russians, the city passed from one hand to another, eventually being won by Poland. 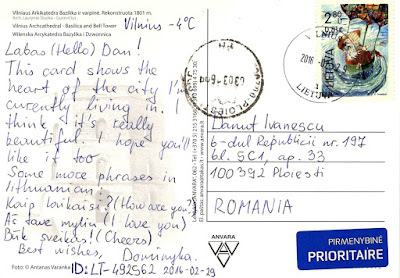 Occupied by Soviet Union in 1939, was given to Lithuania, again annexed by the soviets, then by the Germans, and again by the soviets. Only in 1991 Lithuania became again independent. Despite the whole devastation that the city suffered over time, Vilnius is one of the largest surviving medieval old towns in Northern Europe, an impressive Gothic, Renaissance, Baroque and classical complex, with 70 streets and lanes numbering 1487 buildings.As political centre of the Grand Duchy of Lithuania, it has had a profound influence on the cultural and architectural development of much of eastern Europe.

Among the most important buildings of the old city is St. Anne's Church, a Roman Catholic church, which is a prominent example of both Flamboyant Gothic and Brick Gothic styles. The first church at this site, constructed of wood for Anna, Grand Duchess of Lithuania, was destroyed by a fire in 1419, and the present brick church was constructed on the initiative of Grand Duke of Lithuania Alexander between 1495 and 1500. Despite the numerous restorations, the exterior of the church has remained almost unchanged since the begining. It was built using 33 different kinds of clay bricks painted in red. The interior is decorated in the Baroque style, as is its altar.

The Vilnius Castle Complex is a group of structures located on the left bank of the Neris River, composed of three castles: the Upper, the Lower, and the Crooked. When Gediminas established his capital at Vilnius, on the little hill which dominates the area existed since the 10th century a wooden castle. It was improved and expanded, so that resisted of numerous attacks of the Teutonic Knights. Its complete capture occurred for the first time during the 1655 Battle of Vilnius. Soon afterwards, the severely damaged castles lost their importance, and many buildings were abandoned. Today, the remaining Gediminas Tower is a major symbol of the city of Vilnius and of the nation itself.

The Monument of Gediminas, realised by V. Kasuba and unveiled in 1996, is based on the legend about the foundation of Vilnius. It is said that on those places stretched a thick forest, in which Gediminas liked to hunt. At such a hunting, the Duke was overtaken by darkness chasing an aurochs, and he and his retinue decided to spend the night there. Falling asleep, he dreamed that on the hill a huge wolf stood and howled. He tried to shoot the animal, but the arrows bounced off its iron sides. The next morning the duke ordered to find somebody who could interpret the dream. A pagan priest Lizdeika explained that the gods wanted Gademinas to found a castle there. The duke obeyed and soon began the construction of the castle.

The Cathedral of Vilnius, dedicated to Saints Stanislaus and Ladislaus, is the heart of Catholic spiritual life in Lithuania. The King Mindaugas ordered the construction of the original cathedral in 1251 after his conversion to Christianity. Over the following centuries, the cathedral was destroyed and rebuilt from to the ground many times, each time changing radically his appearance, from the Gothic style to the current Neoclassical style, via Renaissance. The coronations of the Grand Dukes of Lithuania took place there, and inside its crypts and catacombs are buried many famous people from Lithuanian and Polish history.

One of the distinctive features of the Cathedral Square is the bell tower, situated close to the cathedral itself, a thing uncommon outside of Italy. It seems that the tower was in fact one of the towers of the ancient city walls of the mediaeval Lower Castle that once stood near the modern square. Regardless of its origins, the lower parts of the tower are mediaeval, with several small loop-holes preserved. Its oldest underground square section was built in the 13th century on the bottom of the old riverbed. Upper parts were added in the 18th century while the neo-classical finish was added in the 19th century.

About the stamp
On the postcard 0174 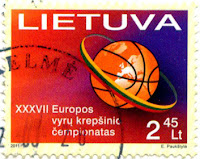 The stamp, issued on January 22, 2011 and dedicated to the European Men's Basketball Championship 2011 (31 August - 18 September), was created by the artist Evelina Paukstyte. It depicts a flying basketball encircled by the national flag of Lithuania.

On the postcard 0352
The first two stamps are part of the definitive series Wooden Sacral Architecture of Lithuania and Wooden Church Belfries, designed by G. Pempe: 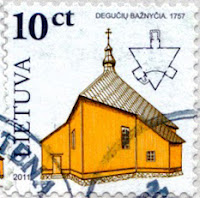 The third stamp belongs to the comemorative series Millenary of Lithuania, issued on June 22, 2002, and designed by H. Ratkevičius. The series containing four stamps with the same value (2Lt):
• First people in Lithuania 10000 BC
• 98 AD - Tacitus mentions Aistians
• 853 AD - Viking attack the Apuole castle - It’s on the postcard 0352
• Lithuania was first mentioned in the Annales Quedlinburgenses in 1009

People of the world and their lives