You have reached the cached page for https://www.britannica.com/biography/Ang-Lee
Below is a snapshot of the Web page as it appeared on 10/24/2020 (the last time our crawler visited it). This is the version of the page that was used for ranking your search results. The page may have changed since we last cached it. To see what might have changed (without the highlights), go to the current page.
You searched for: +Ang Lee We have highlighted matching words that appear in the page below.
Bing is not responsible for the content of this page.
Ang Lee | Biography, Movies, & Facts | Britannica
Ang Lee
Article Media Additional Info

Britannica Quiz
Film School: Fact or Fiction?
Only in America have film stars been elected to public office.

After high school Lee enrolled in the Taiwan Academy of Art, where he became interested in acting. In 1978 he moved to the United States to study theatre at the University of Illinois at Urbana-Champaign and cinema at New York University, where his master’s project, Fine Line, received best film and best director awards. After graduating in 1984, Lee spent the next six years unsuccessfully pitching ideas to Hollywood studio executives. Frustrated and depressed by the stagnancy of his film career in the United States, he entered two scripts in a screenplay contest in Taiwan (Republic of China) and placed first and second. This honour inspired two independent film production companies to fund and produce his movies.

Lee’s first three features, which he cowrote and directed, were comedies that poignantly examined intergenerational conflicts in Chinese families: Tui Shou (1992; Pushing Hands), Hsi Yen (1993; The Wedding Banquet), and Yinshi nan nu (1994; Eat Drink Man Woman). After earning international acclaim for the latter two movies, Lee was chosen to direct a screen adaptation of the Jane Austen novel Sense and Sensibility (1995). The film—which starred Emma Thompson, Kate Winslet, and Hugh Grant—marked a turning point in his career, with Lee proving that he could handle a British period piece. Despite his admittedly clumsy English, Lee worked with the actors—sometimes even employing tai chi chuan exercises—to evoke poignant performances, a hallmark of his directorial style. The movie was a success, garnering seven Oscar nominations.

Lee returned to Hollywood to make his next film, The Ice Storm (1997), a tragic drama set in the 1970s about two spiritually empty upper-middle-class American families. In 2000 Lee directed Wo hu cang long (Crouching Tiger, Hidden Dragon), for which he received his first Academy Award nomination. The lavish film, which featured spectacular scenes of martial arts, became the highest-grossing foreign-language film released in the United States. Expanding his repertoire, Lee made the live-action thriller The Hulk (2003), transforming the comic-book story into an intelligent investigation of character and identity. In 2005 he directed Brokeback Mountain, a Western that centred on two cowboys (played by Heath Ledger and Jake Gyllenhaal) who fall in love. The film was critically acclaimed, and Lee’s direction won him an Oscar.

Lee subsequently directed Se, jie (2007; Lust, Caution), an erotic tale set during the Japanese occupation of Shanghai in World War II, and Taking Woodstock (2009), a comedy about a young man’s pivotal role in staging the famed Woodstock Music and Art Fair. He returned in 2012 with Life of Pi, an adaptation of Yann Martel’s fablelike novel (2001) in which an Indian boy, having survived a shipwreck in the Pacific Ocean, becomes trapped on a lifeboat with a Bengal tiger. The visually sumptuous film earned Lee a second Academy Award for best director. His next film was another adaptation, Billy Lynn’s Long Halftime Walk (2016), about Iraq War veterans. In 2019 Lee directed Will Smith in the action drama Gemini Man, in which a hit man is hunted by his clone.

The Editors of Encyclopaedia Britannica This article was most recently revised and updated by Alicja Zelazko, Assistant Editor. 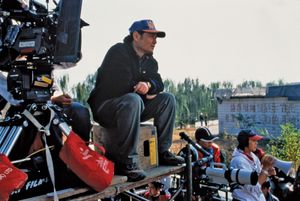