You have reached the cached page for https://www.britannica.com/biography/Eddie-Murphy
Below is a snapshot of the Web page as it appeared on 12/2/2020 (the last time our crawler visited it). This is the version of the page that was used for ranking your search results. The page may have changed since we last cached it. To see what might have changed (without the highlights), go to the current page.
You searched for: +A Thousand Words movie We have highlighted matching words that appear in the page below.
Bing is not responsible for the content of this page.
Eddie Murphy | Biography, Movies, & Facts | Britannica
Eddie Murphy
Article Facts & Data Media Additional Info

Join Britannica's Publishing Partner Program and our community of experts to gain a global audience for your work!
External Websites
Britannica Websites
Articles from Britannica Encyclopedias for elementary and high school students.
WRITTEN BY
The Editors of Encyclopaedia Britannica
Encyclopaedia Britannica's editors oversee subject areas in which they have extensive knowledge, whether from years of experience gained by working on that content or via study for an advanced degree....
Alternative Title: Edward Regan Murphy

Eddie Murphy, byname of Edward Regan Murphy, (born April 3, 1961, Brooklyn, New York, U.S.), American comedian, actor, and singer who was a dominant comedic voice in the United States during the 1980s. His comedy was largely personal and observational and at times raunchy and cruel. He was also a skillful impersonator.

Britannica Quiz
Musical Medley: Fact or Fiction?
Are words sung to music handled by the same part of the brain that processes spoken words? From Chopin to Motown, test your knowledge in this study of music.

Murphy began doing stand-up comedy in New York City as a teenager and was only 19 years old when he joined the cast of Saturday Night Live in 1980. He quickly emerged as the show’s top performer, creating memorable characters such as Mister Robinson (a spoof on the children’s show host Mister Rogers), convict-poet Tyrone Green, and a very grumpy take on the animated clay character Gumby. Murphy scored a major hit in his first film, 48 Hrs. (1982). He followed with three more box-office successes—Trading Places (1983), Beverly Hills Cop (1984), and The Golden Child (1986). He left Saturday Night Live in 1984 to focus on his film and stand-up career. In addition to sequels to 48 Hrs. and Beverly Hills Cop, Murphy showed his versatility in Eddie Murphy Raw (1987), which documented two of his live performances, and the comedy Coming to America (1988), in which he played four different roles. He recorded several comedy albums during the 1980s and also scored a minor pop music hit with the single “Party All the Time” in 1985. He wrote, directed, and starred in Harlem Nights (1989), which was a critical and commercial disappointment.

After a series of flops in the early 1990s, Murphy triumphed again with The Nutty Professor (1996) and Dr. Dolittle (1998), both updated versions of previous films. He also found success with animated family films, providing the voice of Mushu in Mulan (1998) and that of Donkey in the Shrek series (2001, 2004, 2007, and 2010). In 2007 Murphy earned his first Academy Award nomination—for best supporting actor—for his performance in Dreamgirls (2006). His later films included Imagine That (2009), Tower Heist (2011), A Thousand Words (2012), and Mr. Church (2016). In the biopic Dolemite Is My Name (2019), he played comedian and actor Rudy Ray Moore, who was a blaxploitation star in the 1970s. After an absence of 35 years, Murphy returned to Saturday Night Live in 2019, and, for his performance as the host, he earned an Emmy Award (2020) for guest actor in a comedy series. In 2015 Murphy received the Kennedy Center’s Mark Twain Prize for American Humor.

The Editors of Encyclopaedia BritannicaThis article was most recently revised and updated by Amy Tikkanen, Corrections Manager. 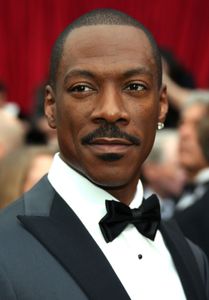