You have reached the cached page for https://wikimili.com/en/Blaenau_Gwent_County_Borough_Council
Below is a snapshot of the Web page as it appeared on 12/30/2020 (the last time our crawler visited it). This is the version of the page that was used for ranking your search results. The page may have changed since we last cached it. To see what might have changed (without the highlights), go to the current page.
You searched for: +1973 gwent county council election wikipedia 2018 We have highlighted matching words that appear in the page below.
Bing is not responsible for the content of this page.
Blaenau Gwent County Borough Council - WikiMili, The Best Wikipedia Reader

Prior to May 2017 the Labour Party had firm control of Blaenau Gwent council, with 30 seats. However, at the May 2017 council elections the numbers of Labour councillors was greatly reduced, with the Independents winning majority control. The Conservatives and Green Party failed to win any seats. [1]

Summary of the council composition after council elections, click on the year for full details of each election. [2] [3]

The county borough is divided into 16 electoral wards returning 42 councillors. The following table lists council wards, communities and associated geographical areas. Communities with a community council are indicated with an asterisk (*).

Blaenau Gwent Council discontinued the role of mayor in 2017. The last Mayor of Blaenau Gwent was Councillor Barrie Sutton.

All the ceremonial and civic functions previously undertaken by the Mayor are now allocated to the Leadership, Executive and other members of the Council. A Chair of the Council role was also created for the chairing of meetings. [6]

Joanne Collins, the council's executive member for education and also a governor of her son's primary school took her family on holiday during school term time, "in direct contravention of her department's own policy", reported Private Eye in April 2020. The council reportedly distributes a pamphlet titled "School Attendance - a guide for parents of children starting school" that clearly states Blaenae Gwent Council "requested headteachers do not authorise any holidays in term time". The booklet had been published by Families First, a welsh government project, in conjunction with the council. Collins' action reportedly caused resentment among local families who had been refused permission to take a holiday during term time to save on cost. In response, council leader, Nigel Daniels, issued a statement to the South Wales Argus newspaper stating the "holiday in question was authorised ... and fully complied with the policy". [7]

Blaenau Gwent is a county borough in Wales, sharing its name with a parliamentary constituency. It borders the unitary authority areas of Monmouthshire and Torfaen to the east, Caerphilly to the west and Powys to the north. Its main towns are Abertillery, Brynmawr, Ebbw Vale and Tredegar. Its highest point is Coity Mountain at 1,896 feet (578 m).

St Illtyd is a hamlet near Aberbeeg, in southeast Wales, within the historic boundaries of Monmouthshire. It is situated on the mountain road between Pontypool and Abertillery in Blaenau Gwent. It rests at about 1200 feet above sea level. The Royal Mail postcode is NP13 2AY. 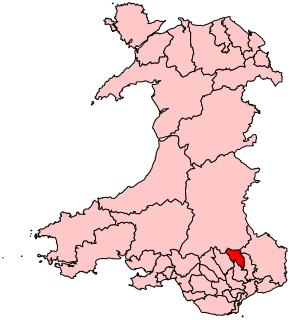 Blaenau Gwent is a constituency in South Wales, represented in the House of Commons of the UK Parliament since 2010 by Nick Smith of the Labour Party. 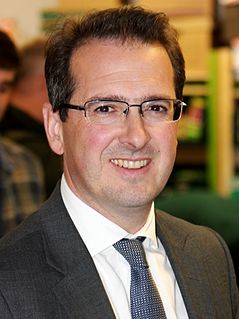 Two by-elections were held for the constituency of Blaenau Gwent in Wales following the death of Member of Parliament and Assembly Member Peter Law on 25 April 2006. As Law was the MP and Assembly Member (AM), his death required by-elections in both the parliamentary seat and the equivalent Welsh Assembly constituency. The two elections polled on the same day, 29 June, as a by-election in Bromley and Chislehurst. A win by the Labour Party in the AM by-election would have restored their majority in the Welsh Assembly, which was lost when Law was expelled from the party.

David Clifford Davies, commonly known as Dai Davies, is a Welsh politician. He was the Member of Parliament (MP) for the Blaenau Gwent constituency in South Wales from 2006 to 2010, representing the Blaenau Gwent People's Voice Group. He was elected at a by-election in June 2006 following the death of independent MP Peter Law, but lost his seat the at the 2010 general election to Labour's Nick Smith by 10,516 votes.

Monmouthshire County Council is the governing body for the Monmouthshire principal area – one of the unitary authorities of Wales.

High Peak Borough Council is the local authority for High Peak, a borough of Derbyshire, England. It forms part of the two-tier system of local government for High Peak, alongside Derbyshire County Council. The administrative base of High Peak Borough Council is split between sites in the towns of Buxton and Glossop. Full council meetings are usually held at the Octagon, Buxton. The whole council is elected once every four years. As of May 2019 the council is controlled by the Labour party.

The For Darwen Party was a local political party in Darwen, south of Blackburn, England, with a platform that Darweners were not properly represented on Blackburn with Darwen Borough Council.

The 2012 police and crime commissioner elections were polls held in most police areas in England and Wales on Thursday 15 November. The direct election of police and crime commissioners (PCCs) was originally scheduled for May 2012 but was postponed in order to secure the passage of the Police Reform and Social Responsibility Act 2011 through the House of Lords. The government considers the elected commissioners to have a stronger mandate than the "unelected and invisible police authorities that they replace". The elections took place alongside by-elections for the House of Commons in Cardiff South and Penarth, Corby and Manchester Central, and a mayoral election in Bristol.

Swffryd is a Welsh community on the boundary of Blaenau Gwent County Borough Council. 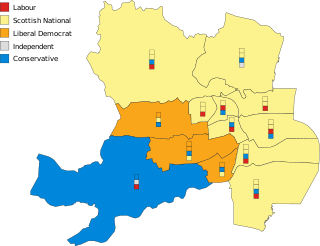 The 2017 Aberdeen City Council election took place on 4 May 2017 to elect members of Aberdeen City Council. The election used the 13 wards created as a result of the Local Governance (Scotland) Act 2004, with each ward electing three or four Councillors using the single transferable vote system a form of proportional representation, with a total of 45 Councillors elected, an increase in 2 members from 2012.

As part of the local elections in Wales on 4 May 2017, the 42 seats of Blaenau Gwent County Borough Council were up for election. The majority of members elected were independents, replacing the previous Labour administration.

Badminton is a community and electoral ward in Blaenau Gwent, Wales, with the community being created in 2010.

Six Bells is an electoral ward and neighbourhood in Abertillery, Blaenau Gwent, Wales. It was originally a village that grew up around the local coal mines. The ward elects two county councillors to Blaenau Gwent County Borough Council.

Brynithel is a village in the Ebbw Valley in Blaenau Gwent. It belongs in the community of Llanhilleth.