You have reached the cached page for https://github.com/jtanwk/congressedits
Below is a snapshot of the Web page as it appeared on 3/7/2020 (the last time our crawler visited it). This is the version of the page that was used for ranking your search results. The page may have changed since we last cached it. To see what might have changed (without the highlights), go to the current page.
You searched for: +1430 wikipedia software We have highlighted matching words that appear in the page below.
Bing is not responsible for the content of this page.
GitHub - jtanwk/congressedits: Exploration of 1,430 Wikipedia edits made from Congress IP addresses, as captured by @congressedits
Skip to content

GitHub is home to over 40 million developers working together to host and review code, manage projects, and build software together.

Sign up
Exploration of 1,430 Wikipedia edits made from Congress IP addresses, as captured by @congressedits
Find file

I first stumbled across the @congressedits twitter account last year. If you haven't heard of it, it's a Twitter bot that detects edits made on Wikipedia pages that originate from certain IP addresses associated with Congress, and tweets out the changelog. Naturally, I saw an unmined dataset and pounced.

The underlying code is all open source and adaptable to different IP ranges. Definitely check the Github repo out if you're interested in looking deeper. It's a great project.

A Quick Note on IP Addresses

It's also worth prefacing this entire article by saying that an IP address does not mean rock-solid attribution. Per the CongressEdits Wikipedia page:

The changes could have been made by anyone using a computer on the U.S. Capitol complex's computer network, including both staff of U.S. elected representatives and senators as well as visitors such as journalists, constituents, tourists, and lobbyists.

My money's with PR teams and bored Congressional interns. But seriously: any insight from this project probably has very little external validity. It's just a fun way to practice.

As usual, we complement base-R with the usual set of wrangling tools and other API packages.

I followed these instructions to obtain the authentication keys that the TwittR package needs.

After the authentication, it's a simple matter of scraping all available tweets from @congressedits using the twittR::usertimeline command.

I didn't know it when I started this project, but I was going to need a crash course in regex formatting. Fortunately, I found a short and simple tutorial here.

If you're looking at the code, here's short list of my cleaning steps in pipe order:

1. What Wikipedia pages are edited the most? 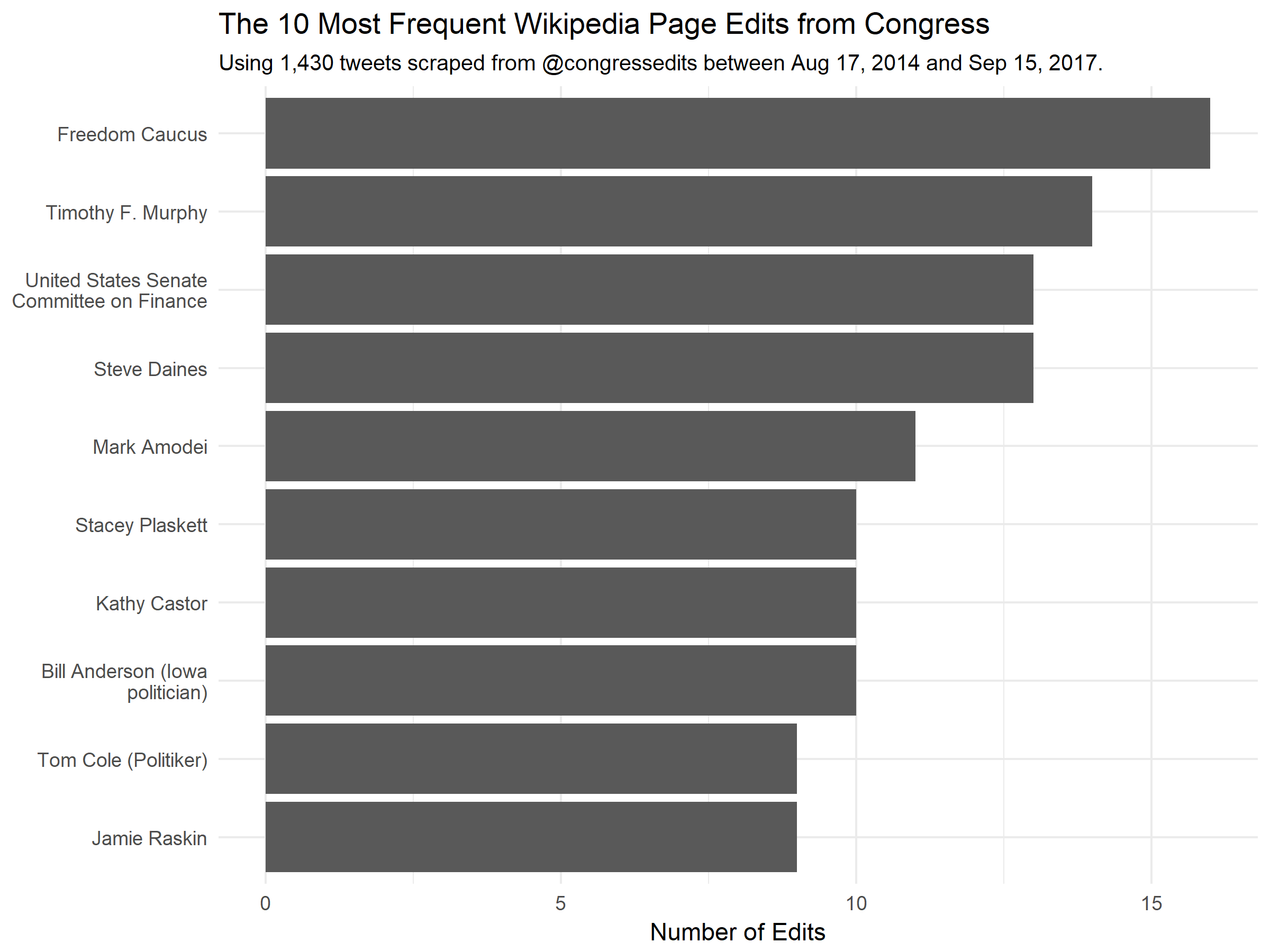 No surprises here - all political figures or topics. Most likely PR teams doing their jobs. What about disaggregating this by edits from the House versus the Senate? 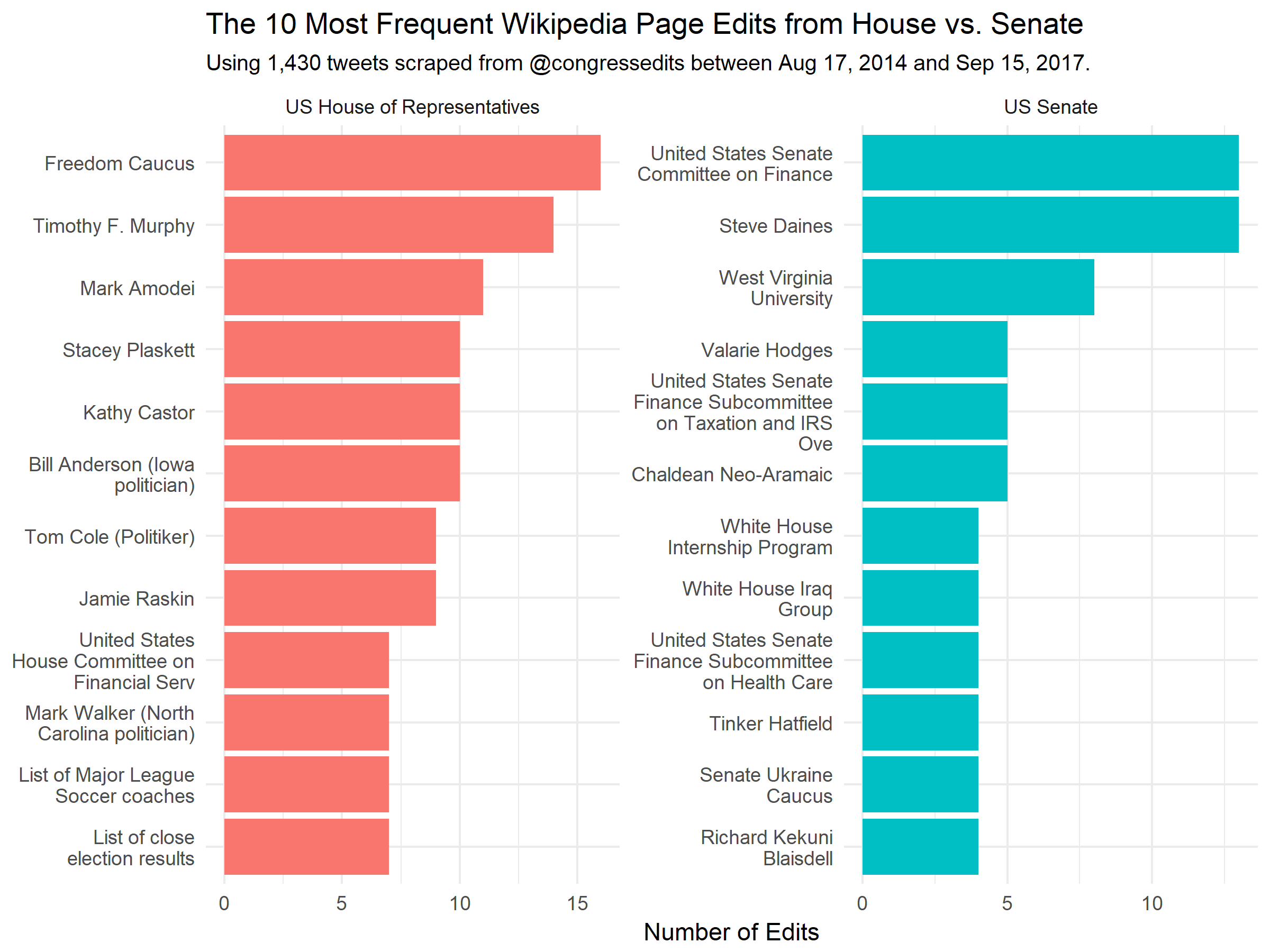 At this point, if there weren't people on Capitol Hill taking an intense interest in Chaldean Neo-Aramaic, I'd be concerned. Moving on.

2. When are Wikipedia pages being edited?

Another simple question. Are there trends that we might be able to find in the dates or times of the tweets?

I'm assuming at this point that there's a fairly low discrepancy between the time of the wikipedia page edit and the time of the tweet. A brief manual comparison confirms this - the time listed on the tweet (created) matches the timestamp of the edit saved to Wikipedia. 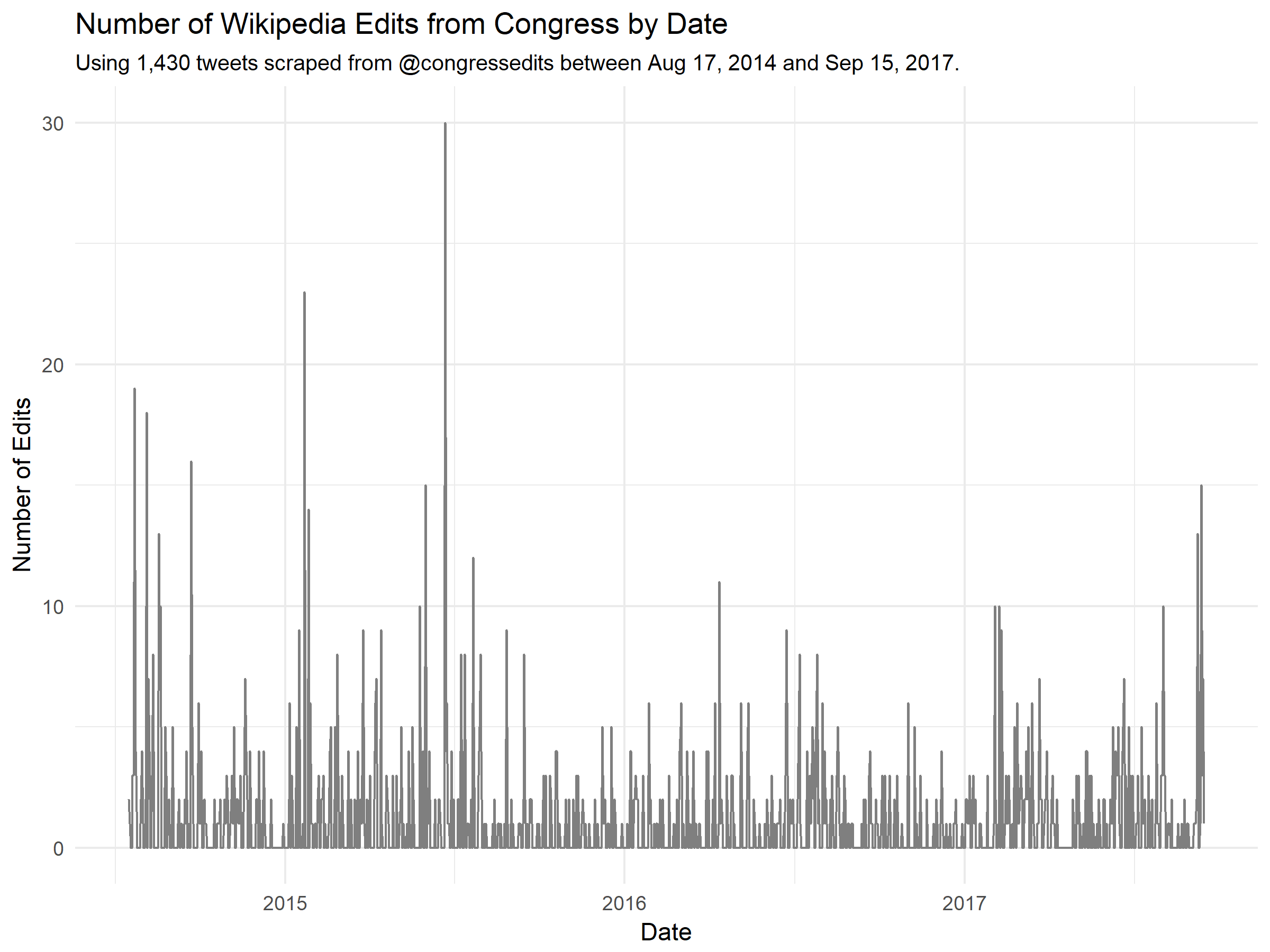 No big cyclical trends that I can see. What's that big spike in 2015?

Let's try a different tactic. What patterns arise if we look at the number of edits by time and day of the week? 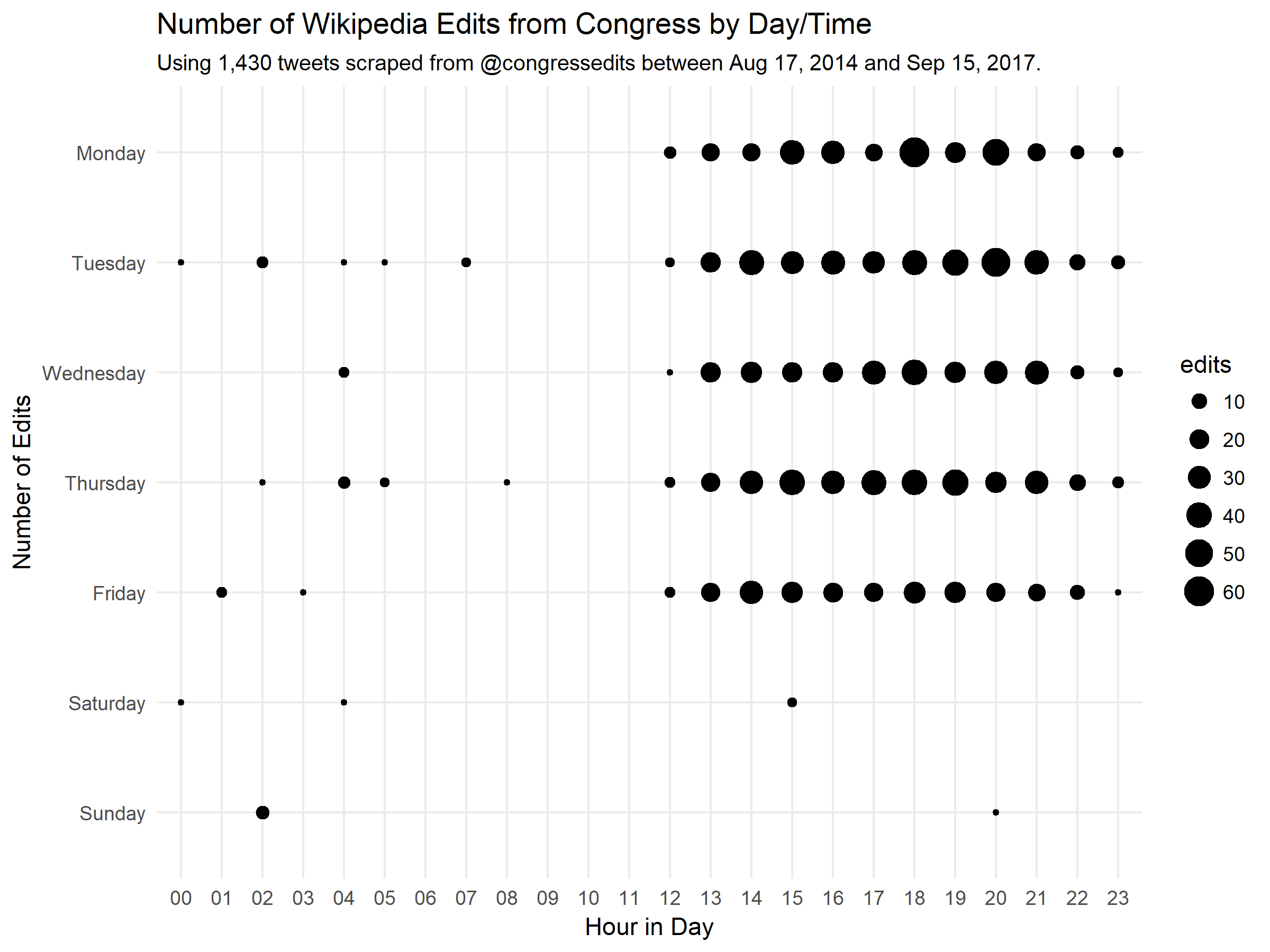 In fact - let's delve deeper into these late night edits. Which pages are actually being edited at completely unreasonable hours - say, between 12 midnight and 8:00 am? 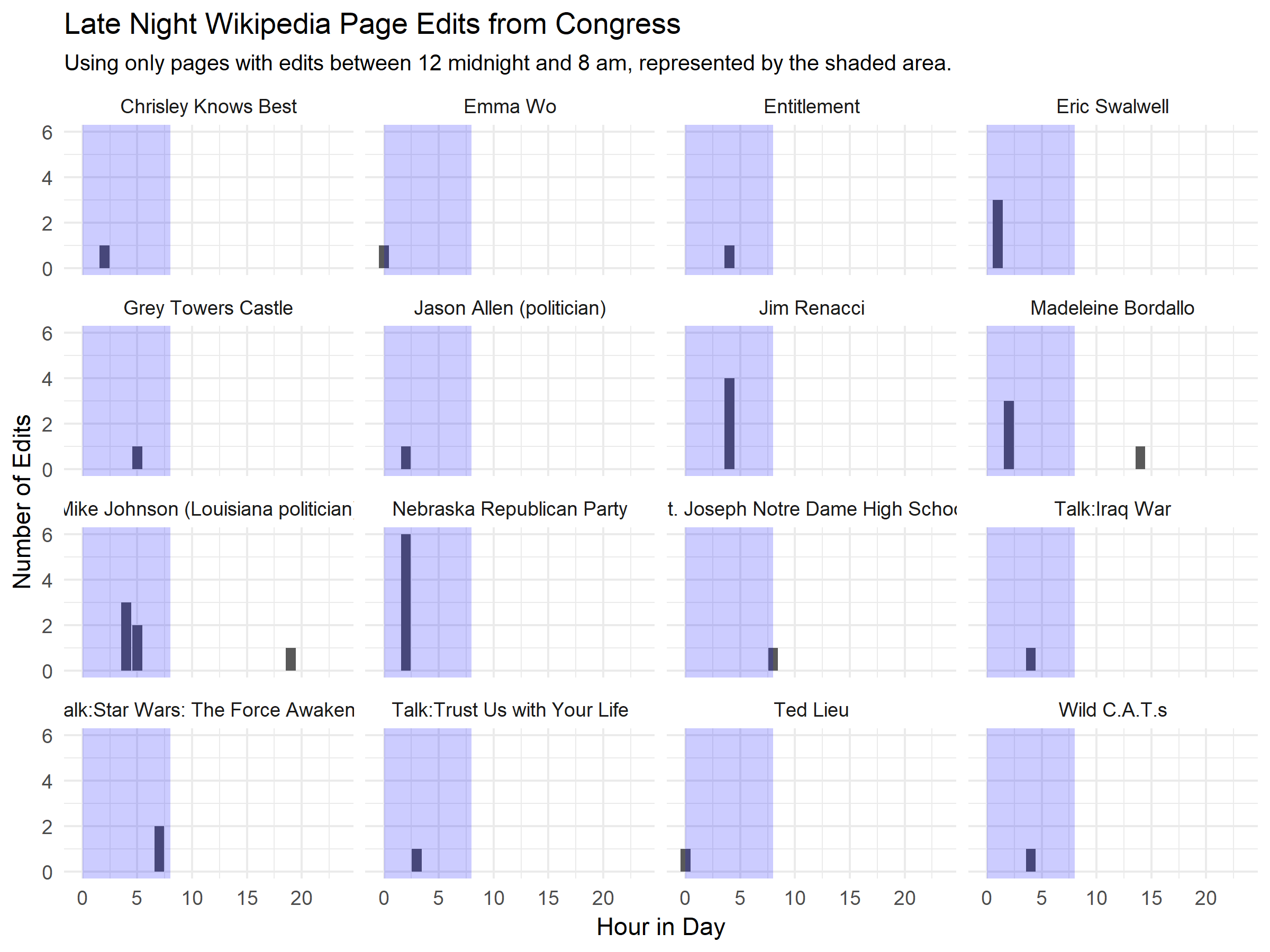 Someone at the Nebraska Republican Party is working hard.

3. What types of Wikipedia pages are being edited?

So far, we've dealt mainly with page titles. However, each Wikipedia page also belong to several categories, which we can scrape for each page using the wikipediR package. The raw output is a little hairy, so I wrote a function to make it a little easier on the eyes.

Beautiful. Now that we've wrangled into tidy category-level data - what are the most frequent categories of Wikipedia pages that get edited from Congress IP addresses? 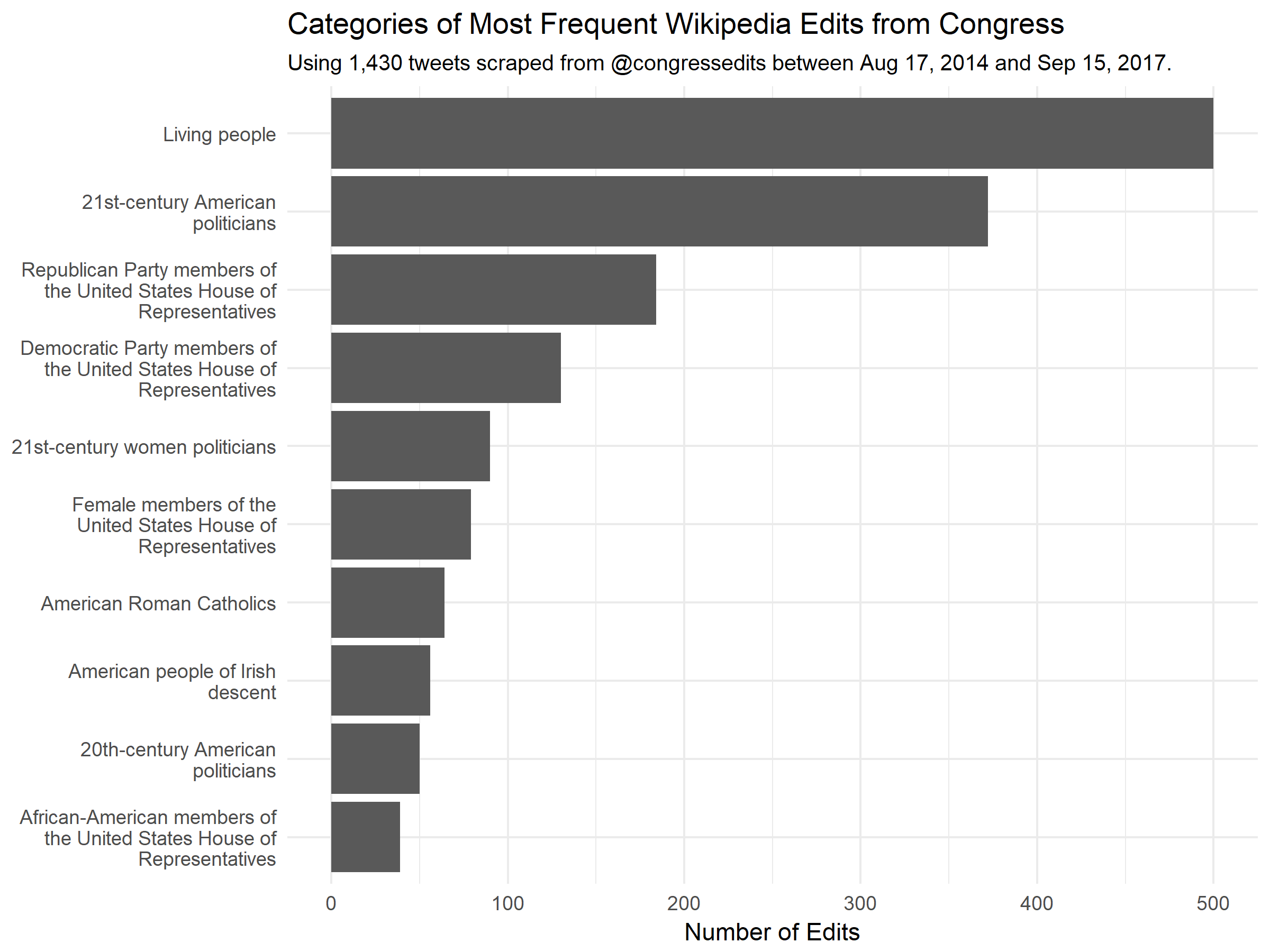 In terms of edit activity, Republican representatives' pages are edited more often than those for Democrat representatives - at least within the date range of our tweets.

Outside of that, no particularly surprising results. If anything, we've learned that most of these edits are happening within the political bubble. The interesting stuff, if it's there, might lie outside of it.

4. Which tweets got the most engagement?

Let's be real: some of these page edits are pretty weird. When a tweet pops up alerting you that the Wikipedia page for Carly Rae Jepsen was edited from a Congress location, that's the kind of thing that Twitter takes notice of. Especially if the specific edit is to describe her as the "worlds [sic] greatest singer".

This is my shorthand for finding the rare non-political edit amongst this dataset. If anyone can tell me a better way to find out what shouldn't be edited from Congress but has been, I'm all ears.

Back to the weird stuff. Looking at some of the more popular tweets in terms of Twitter engagement (in terms of favorites and retweets), what actually got traction? 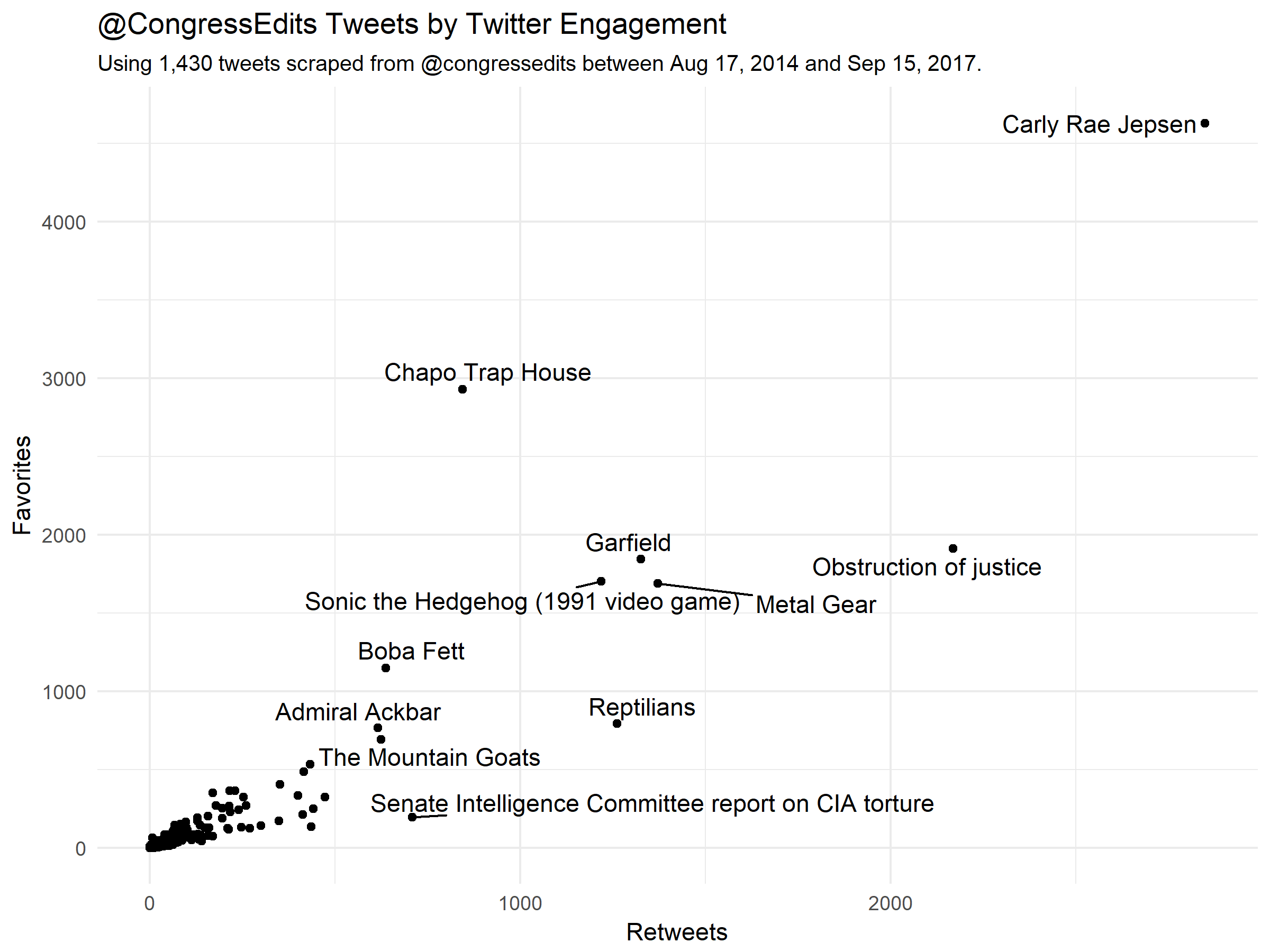 A little back story: the @congressedits Twitter account actually gained minor fame back in 2014 in reporting the anonymous edits to the page on "Senate Intelligence Committee report on CIA torture". The actual edit, which removed a phrase describing "enhanced interrogation techniques" as "a euphemism for torture", was tweeted out and news media quickly picked up on it. I'm a little surprised it's this low on the list.

As for the other categories, I'll let the chart speak for itself.

As always, some answers only brought up more questions. Some that I'd like to answer in a future revision: