You have reached the cached page for https://blog.timesunion.com/tablehopping/67642/report-brewery-possible-bakery-coming-to-voorheesville/
Below is a snapshot of the Web page as it appeared on 5/11/2021 (the last time our crawler visited it). This is the version of the page that was used for ranking your search results. The page may have changed since we last cached it. To see what might have changed (without the highlights), go to the current page.
Bing is not responsible for the content of this page.
Report: Brewery, possible bakery coming to Voorheesville - Table Hopping 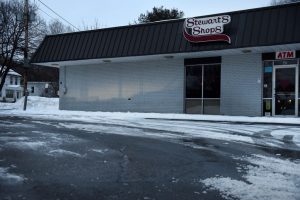 A former convenience store in the village of Voorheesville is being eyed for redevelopment as a bakery-cafe or other type of dining spot. (File photo.)

A Guilderland lawyer and Saratoga Springs marketing executive/philanthropist are working on separate projects to bring a brewpub and a bakery-cafe to Voorheesville.

The lawyer, Charles Rosenstein, wants to develop a microbrewery with casual-fare food in Building Six, an industrial structure at 10 N. Main St., at the western terminus of Helderberg-Hudson Rail Trail. He pitched the idea at the April meeting of the Voorheesville Planning Commission, according to a story in the Altamont Enterprise.

The paper also reported that Ed Mitzen, founder of Saratoga Springs-based Fingerpaint Marketing, who last year bought the Bread Basket Bakery in the Spa City and donates its profits to charity, is under contract to buy a defunct Stewart’s location at 42 S. Main in the village. He hopes to put a bakery-cafe or similar type of restaurant there, the paper said, though a clause in the agreement would allow him to drop the deal if restrictions by the municipality prove intractable.